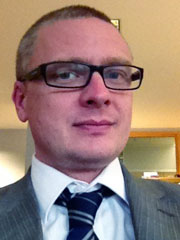 We’re very happy to announce another regular contributor to the site, Stephen from GweiloRamblings…

A regular blogger in his own right on GweiloRamblings, we’ll let Stephen introduce himself in his own words…

“Hi, My name is Stephen and there are a few things about me that will tell you everything. I am a lifelong Tottenham Hotspur Fan (so disappointment is in my genes), I am over 40 and I still seem to be unable to swim, and despite loving my iPhone to possibly unnatural levels, I actually have a phobia about making telephone calls. I’ll collect just about anything, but one glimpse of my Comic, CD and DVD collection would make many a Storage Rental Company rub their hands with glee! None of which are particularly relevant to what I am doing here, but it is always nice to show there is more to life than Movies. Sometimes.

“My love of cinema is wide and longstanding. I think I can possibly draw it back to the fact I lived the first 5 years of my life without a television, so the only glimpse I got of the world outside my country village was the occasional trip to the Cinema. Then it was just the blockbuster of the day, but as I grew up and the televisual apparatus was slowly ushered into my life (a small black and white portable was one day introduced into the young Stephen’s bedroom), I discovered those lost and unusual films that would only be shown late night on BBC2, and latterly Channel 4. Suddenly a world of strange languages and subtitles was opened to me, letting me have a little insight to cultures I simply had no idea even existed.

“Of course I grew up, started to travel, even got to meet people from not only outside the village, but also from these strange foreign lands. Then I discovered VHS and would scour strange shops in London and Brighton, hunting down films both well known and obscure. Then this led to DVD, and then the amazing wonder that is the internet.

“Asian cinema in particular began to fascinate, but initially this was due to the J-Horror boom, but I was blown away by the ideas and visuals in films like Ringu and Audition. I started exploring the rest of the region, but then life changed, and somehow it got replaced with some other obsession which I now cannot recall. Then a chance meeting revitalised my interest in Asian Cinema, opening up fully the complex and wide ranging types of films that were on offer. I devoured these films with a passion that even surprised me, but somehow I was still lacking something. Then I had an idea, which was to consume the next three years – I had a little blog that frankly I was doing nothing with, and I thought maybe I would do a little set of posts about the 15 or so Asian Movies that I really adored. 15 was a number that came and went, and suddenly I was way past 50. I thought I might stop at 100, but to this day I keep adding to it. But, whilst GweiloRamblings (http://gweiloramblings.wordpress.com/) is still very much my first love, the time has come to spread my wings, try my hand in a new environment. So here I am, planning to contribute on a semi-regular basis to easternKicks.com!”