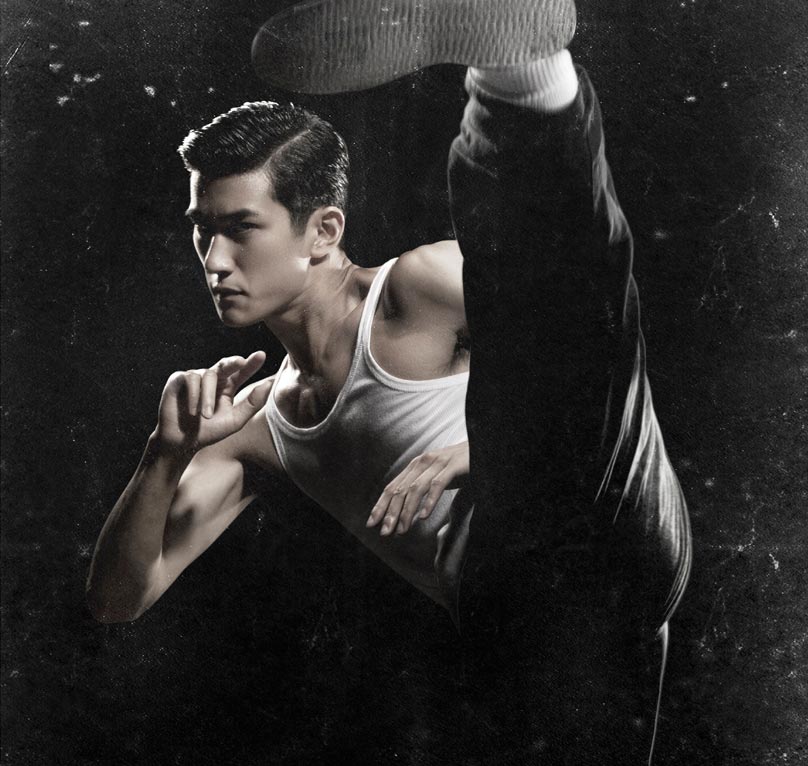 We chat to Aarif Rahman, star of new Bruce Lee biopic Young Bruce Lee (aka Bruce Lee, My Brother), based on the recollection of Bruce’s own younger brother Robert…

How intimidating was it to play Bruce Lee?
At the beginning it was very intimidating. He simply represented too much. Any one who would dare play him would be carrying a lot weight on his shoulders. However I was lucky enough to have the support of the Lee family and this helped tremendously. Having Bruce Lee’s brother tell you to your face “wow… you really do resemble my brother when he was young” was a huge confidence booster.

You were born almost 15 years after Bruce Lee died; when did you first become aware of him and what did he mean to you before making the film?
Being a child of the 80’s I wasn’t that familiar with Bruce Lee as a child to be frank. But here’s the thing. No matter where you’re from, how old you are, whether you’re familiar with martial arts or not, there is one thing you know for a fact when you hear the name ‘Bruce Lee’ – he can fight. This notion was planted in my brain from as far back as I remember and I’ve met many others who feel the same.

Did your opinion of him change while making the movie?
Definitely. I learned that Bruce was so much more than just a fighter. His thinking was very forward for his time (probably due to his university education in Philosophy) and many of his words still stick with me today.

You’re best known as a successful singer in Hong Kong though you’ve started to carve out a career as an actor too; how did you come to be cast in the role?
The producers of Bruce Lee, My Brother saw my debut performance in Echoes of the Rainbow and felt that I resembled the young Bruce Lee.

What did you base your performance on? Did you watch his movies or did his brother and his other siblings involved in the film help you?
I was very fortunate to be able to work so closely with Bruce’s family and so a lot of preparation involved sitting at a table listening to Robert Lee tell stories supported by exciting pictures of the past. Confidence is a must when playing some one of Bruce’s stature and knowing that I had the support of the Lee family gave me all the confidence I needed. I did watch most of Bruce’s work but I must stress that I was playing a Bruce that had never been seen on-screen. This was Bruce Lee the 17 year old who hung out with his mates dancing cha-cha and sat around the dinner table with his brothers and sisters. I tried hard to fray away from over imitating trademark Bruce Lee moves and looks. I would say around half of my performance was simply throwing myself into Bruce’s Psyche and just letting the emotions flow naturally into whatever situation was given on set, the other half was indeed some imitation to make the character more convincing on-screen.

The film concentrates far more on Bruce the man than Bruce the martial artist, but you still had to convincingly pull off fighting and martial art scenes. How difficult was it to learn them?
It was really quite challenging because I had no prior partial arts training to the film and the time frame was extremely short. Not only did I have to acquire the martial art skills, I also had to do a lot of fitness training so that I could look the part. I ended up spraining my ankle twice. Actually the final fight scene with Charlie Owen (played by Alex Yen) in the loft was done with a sprained ankle.

There are some pretty perilous looking action scenes in the film, particularly on the rooftop; did you run into any problems during shooting?
The rooftop set was festooned with rusted sheets of corrugated iron. I ended up slicing the flesh just below my right pinky on the 1st day of shooting on that set and ended up filming the rest of the 3 days with 5 stitches in my right hand… not exactly the most comfortable experience. I later found out that Bruce had a similar experience and he too had stitches on his right hand due to some filming accident.

What did you enjoy most about making the film? Do you have a favourite scene?
I enjoyed every moment of having the honour of being able to step into the shoes of the young Bruce Lee. Every second filming this movie was amazing but if I had to pick a favourite scene, I would choose the scene with Charlie Owen immediately after our fight in the Loft. I had great fun doing a full-on Bruce lee impression in English.

What’s your favourite Bruce Lee film?
They are all great in my books!

Young Bruce Lee is released on Monday 30 May on 2-disc DVD and Blu-ray by Cine-Asia.