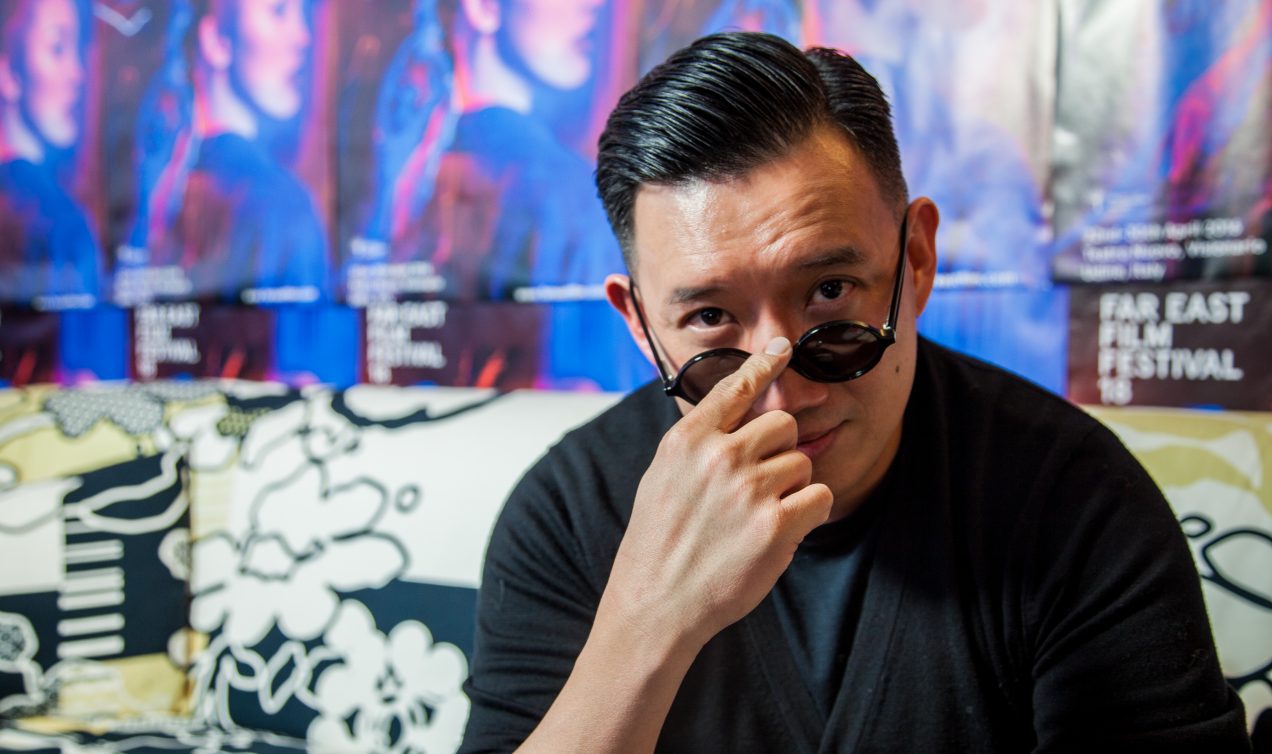 Chapman To’s latest film The Mobfathers was produced alongside director Herman Yau, and is playing at the New York Asian Film Festival. We sat down privately with Chapman To during the European Premiere of The Mobfathers in April at the Udine Far East Film Festival to talk about his film, working as a producer in Malaysia, and his opinions on actors and his career.

Let’s start by introducing the film. Chapman To, can you talk to us about the origin of The Mobfathers?

Chapman To: A year before last year, Herman Yau and me made a film. After that, we had a meeting on what are we going to do after that. I had an idea that I want to make a gangster movie because I love them. I have no idea about the script. After one month, the investors got back to me and I met with director Yau again. We then decided to do a gangster film. Nothing about politics. It is just a gangster movie. 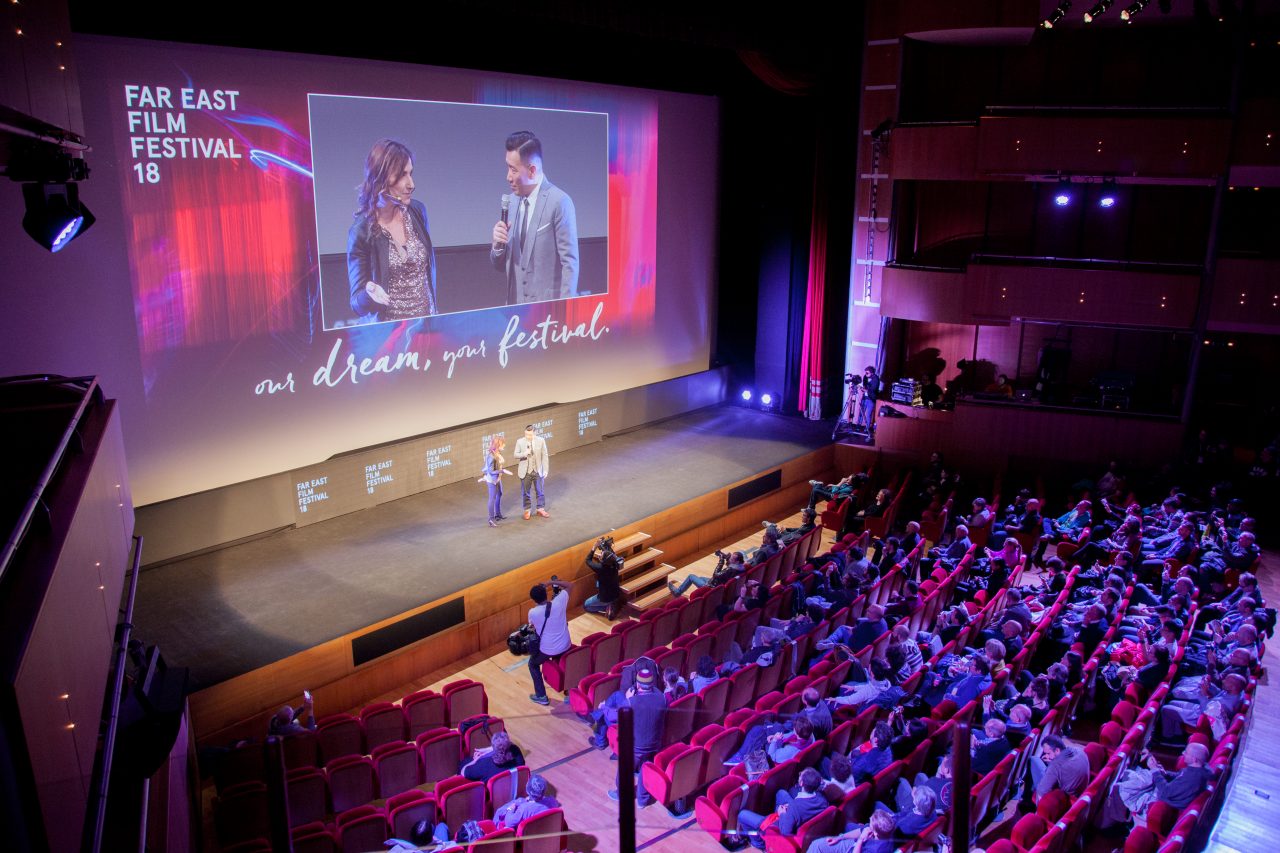 Obviously the major point is politics

CT: This movie is about the politics of gangsters.

I want to ask about the budget for Mobfathers. What is the budget of the film?

CT: Of course. It is 9.8 billion HKD. It is a very high budget movie compare to others. Why do you ask that? You wanna invest in my films?

I just want to bring up something else Mr. Chapman. Aside from your career, you have formed a production company and are making films in South East Asia, including a film that is released by you as a director. I was wondering whether Hong Kong filmmakers are not catering enough in the South East Asia market. What is your reason for that?

CT: If I can’t go to China, that is why I go to Malaysia and make films. You know that Hong Kong people always work outside of China, because we don’t have access to that kind of market. You can always say “I will support you”, but they won’t commit to it you know. So, you have to find some other country to make films and find a job. 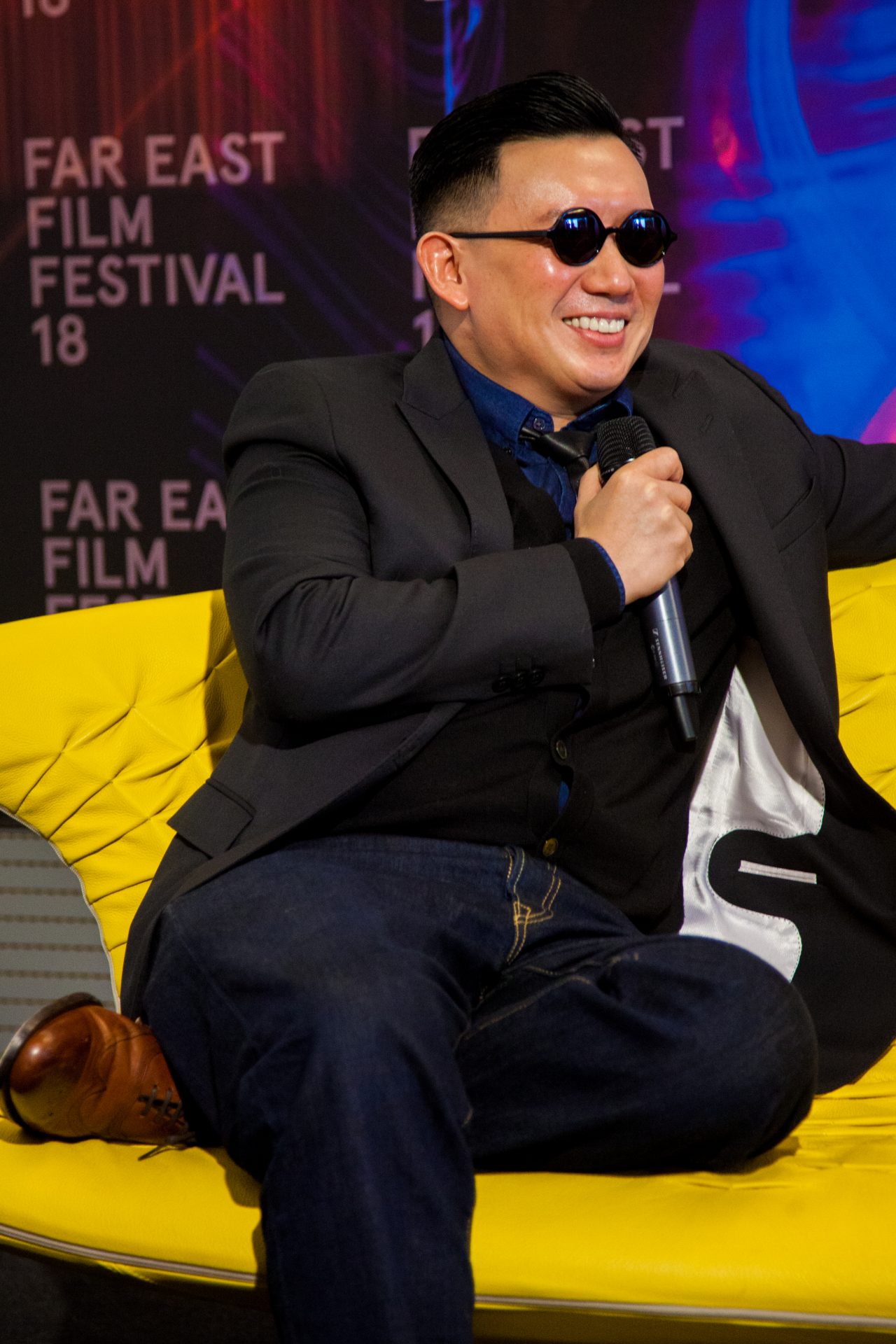 How has your experience been in making films for Singapore and Malaysia markets?

Do you enjoy directing the films?

I wonder how was it like working close in Mobfathers with Anthony Wong as the bad guy.

CT: That is easy for him. We were enemy before this film. I don’t have any more space for more enemies. So, I have to work with him. Now, we become friends. Very close friends.

In working relationships, how is it like working with Herman Yau?

CT: Being an actor is a peak of the business and you don’t have to use your brain. We have a lot of time to waste. You can play on your iPhone. Play with your partner. Meeting some new girlfriends. Doing nothing. But being a producer or director, you have to work very hard and answer stupid questions, asking about other actors and actresses. You have to argue with people who are not making any sense. So if you are an actor and argue, you will always win.

What is your experience as a producer in last year’s film with Pang Ho-Cheung?

CT: I think being a producer is so much easier than being an actor. Actually it’s all just about coordinating it. 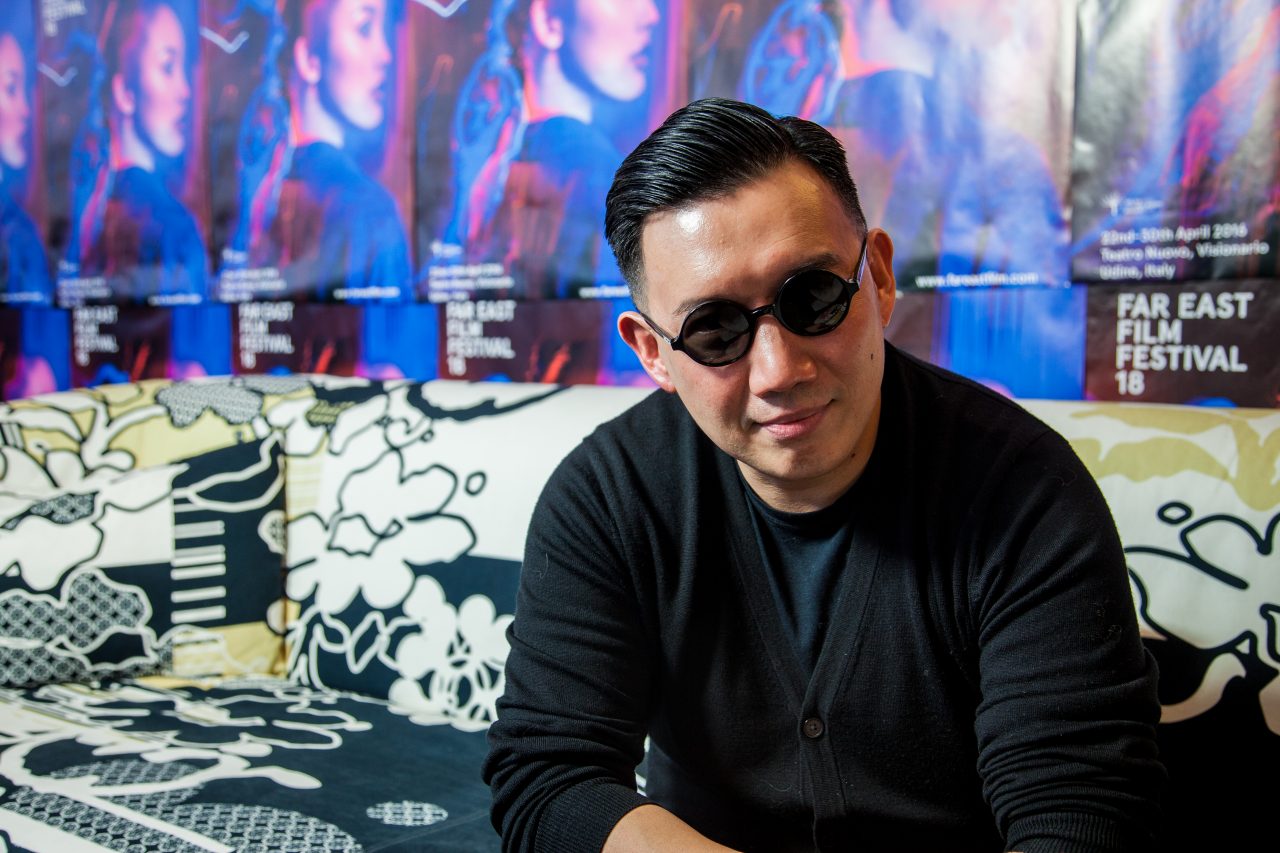 In The Mobfathers there’s the involvement of police, and also you act like politician in the streets. Is there a similarity in there to real life…?

CT: Okay, actually, as an actor, I always think gangster is very close to politician. As you know, the classic Godfather, not Mobfather, Godfather, you can say is a gangster movie but it’s like politics. It’s a political movie too. And all the gangsters in the movie, they all act like politicians. Of course, the gangster world is full of politics, right? And the political world is full of gangsters, right? So, there’s no difference. Actually, gangsters, they are all politicians, I must say. All mafia in Italy, they’re all politicians.

Can you tell me something about the voiceover of your character?

How many of your experiences from your youth are featured in this film?

CT: As an actor, it’s really important to have some real life experience. Though you might not have experience of killing someone before you act as a serial killer, right? But not everyone has that kind of experience. Good? At least close to it, at least you have thought about it. Of course, I have a lot of experience of gangster life. But I must say, is less than the experience that I have in the movie Vulgaria. That was about a producer fucking a donkey in China, right? I have more experience about that. You want to know more about the donkey?

The Mobfather is very different from previous movies about the triads and the Hong Kong mafia. In the election you go against the elder and the boss, how do you feel about that?

CT: I always feel that Herman’s films are over the top. And that is a special part of him that I always think that, for example, he always uses a lot of blood. I mean, he has more blood in his movies than other ones and also, he always has weird sex in the movie. That was weird, right? The fortune telling part. I’ve never had that kind of experience when I have sex with a woman. Trying to do a fortune teller, right? That is weird, right? Oh, it always happens in Italy? Okay. And he always can find a way to tell a story in a very weird way. That is very important because he is a kind of intellectual director.

You know, most of the directors in Hong Kong, they don’t [in Cantonese: aren’t well-educated]… 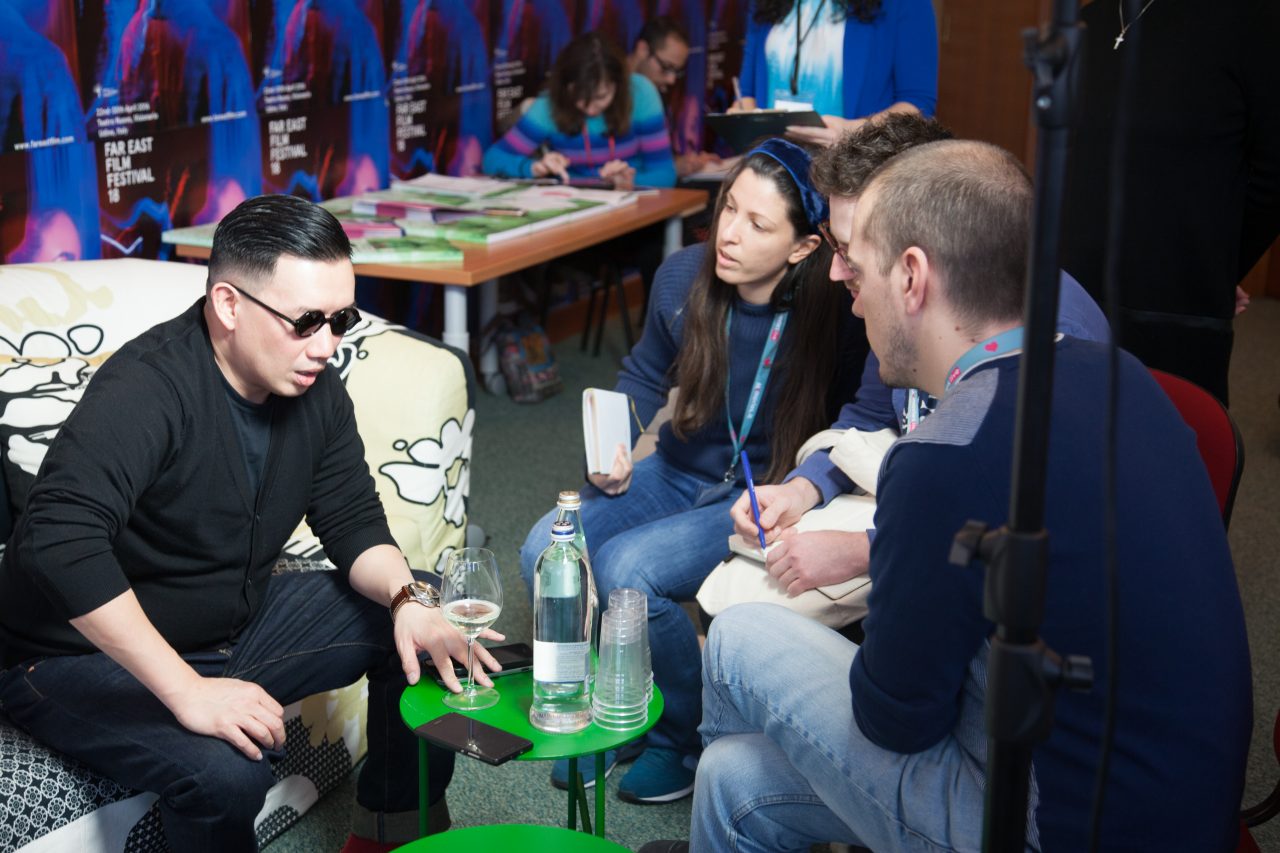 Is your character bringing some kind of revolution inside of the system of the gangster. He is giving the rights to vote to the mafia crowd.

CT: I must say, this character is quite a selfish person. I believe if he can win the election, he won’t do the revolution. So that means, if you’re the prince, you don’t want to be the president. So, he was not born to be prince then he doesn’t want to have a king. So that is my understanding of the character. So, there is nothing, it’s all about selfishness. I don’t think he cares about democracy or not. He only cares about the power. So, democracy for him is just the weapon to get the power. Then, that means he’s a real politician.

Out of all the movies you’ve made, do you have any favourites or the most memorable ones?

I always say good actors, you’re all good prostitutes, you know. Although some actresses at the same time, they are prostitutes. Do you want to know the names? Of course, I have the names in my black book.

For example, Brad Pitt comes to pay you for sex, you’re gonna be happy like now, right? ‘Oh my god, Brad Pitt’s gonna fuck me, I’m gonna suck his dick, oh my god, what a dream.’ So, just like an actor, he has some good scripts, some good directors, you’re happy now, right? If you have a chance, you know Lam Suet? If Lam Suet comes to pay you for sex, you won’t be happy like Brad Pitt’s coming, right? It’s not Andy Lau, it’s not Tom Cruise. So, if you were given a shit role, that is not a thrill. That is the attitude, right?

Is there a responsibility that films should take?

CT: I don’t think so. If you have that kind of concept, then you’re a very good educator. I hate people blaming movies teaching people bad things. We’re not teachers. And that a cinema is not a fucking school, this is a place for entertainment but not education.

The Mobfathers screens as part of the New York Asian Film Festival 2016 (NYAFF). Read all our reviews and coverage of #NYAFF2016. 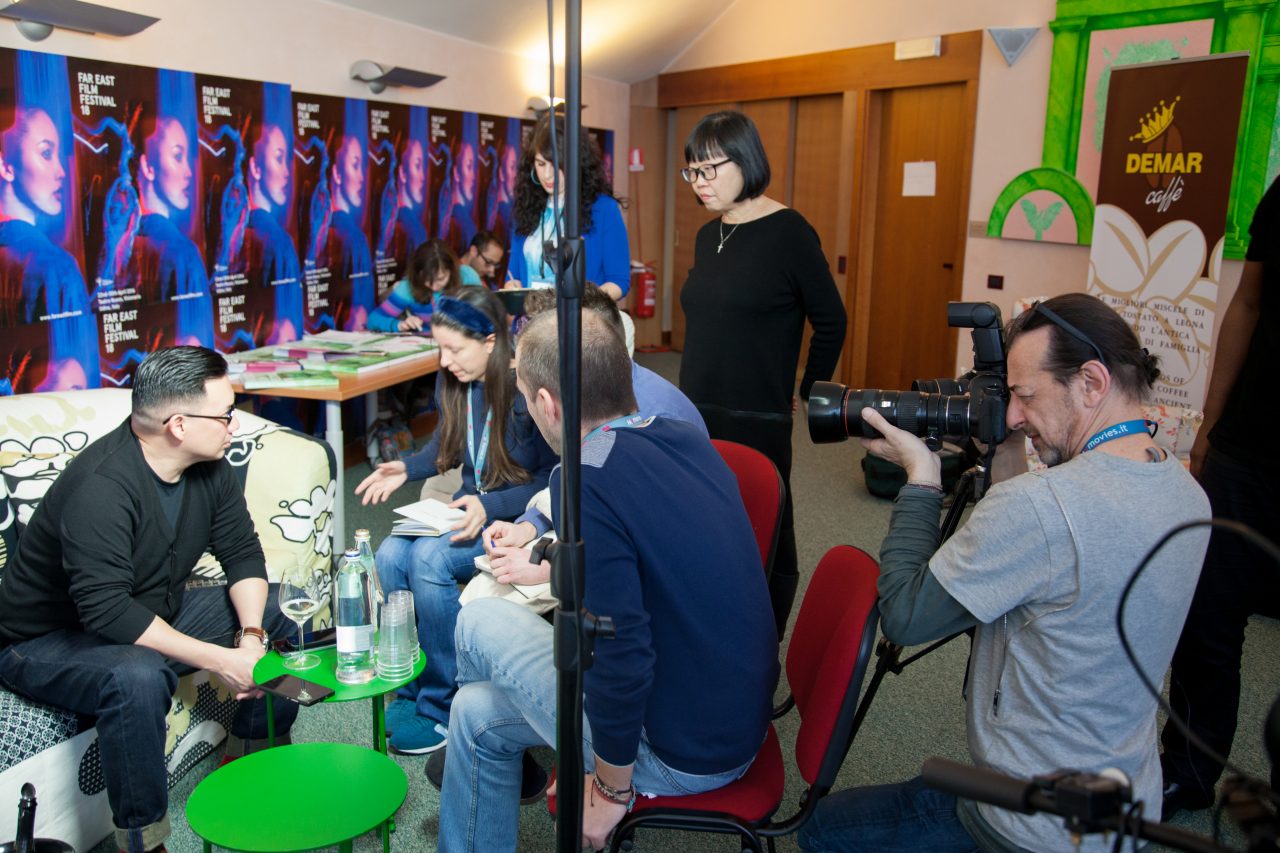