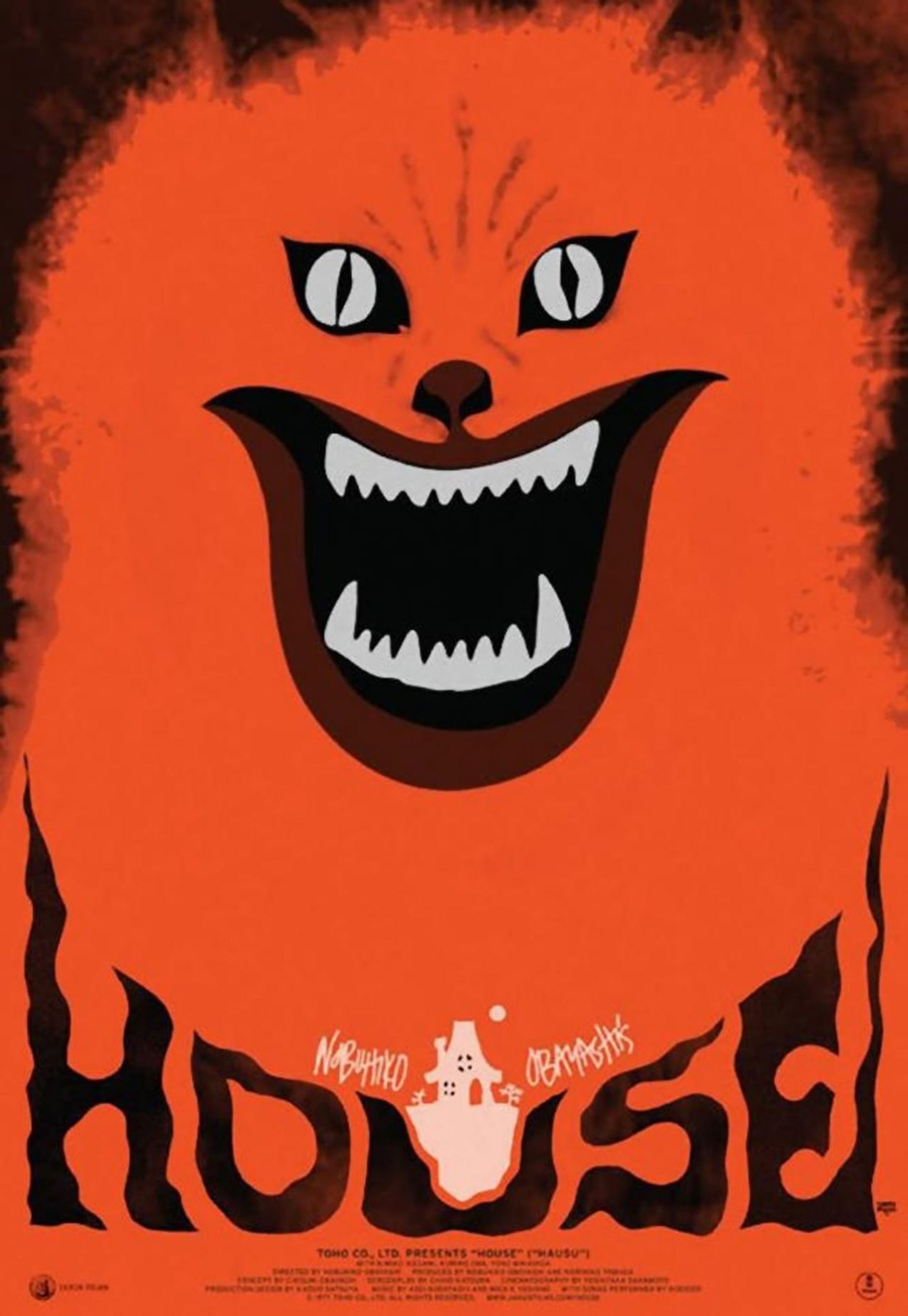 We look back on Nobuhiko Obayashi’s batty classic horror…

In 1975 Jaws was released around the world and was a massive hit in Japan. Toho Studios were keen to replicate this foreign success so approached Nobuhiko Obayashi to direct something that would perform equally as well. Obayashi didn’t respond with a water-based shocker, but rather used ideas from his young daughter Chigumi to create a quite surreal experience. Hausu was a big commercial hit in Japan in 1977, but it wasn’t until 2009 it got a proper western release (although if Sam Raimi wasn’t inspired to some degree by it when making his original Evil Dead you’d raise an eyebrow), followed up by Masters of Cinema and Criterion DVDs. You may think you have watched some crazy Japanese movies, but you will have watched nothing like this film before. For those who haven’t seen it, the elevator pitch is “Seven schoolgirls take a summer trip to the house of one of their Aunts and much craziness ensues”. So join Stephen, Andrew H and Panos as they have a little chat about this most unique experience.

Can you describe Hausu (though we should be calling it House as the English title is actually what it was called locally) in Five Words?

Panos: When drugs go to cinema

Are you a fan of the film? Or not?

Andrew H: Love it! And watching it on the big screen this year at Udine was fantastic! You should really take the chance to see it this way if you can.

Panos: No, the combination of surrealism and incoherence is actually one I cannot stand.

What is your favourite moment? And maybe a scene that doesn’t work for you?

Stephen: I think it has to be the crazy moment when one of the young girls is possessed to play the piano in a compulsive and bloody manner.. which would be enough for most films, but Hausu then chooses to go the extra mile and have the piano consume her! There is plenty of stuff that doesn’t work mind you – mostly involving the complete red herring subplot with a trendy teacher and his Mini Moke.

Andrew H: There are lots of things that are a bit odd, ideas and thoughts that don’t quite match up. But that to me is the charm of an Obayashi film. There is a naivety and even – dare I say it – a ‘wtf’ attitude; that he really just threw everything up there on screen. More than anything, his films (and particularly Hausu) look like everyone was having a fabulous time!

What really surprised me, watching it again on screen, was the amazing visual creativity of it all. I’d forgotten how the train trip the girls take turns into an animated kid’s book with cutouts. Then there are the references to old film styles, the Gone With The Wind style studio sunsets, the old black and white films – all grunge-ified up well before it was hip, and looking like Ozu (who we know he loved from his gender swap comedy Exchange Students), Mizoguchi and so on.

The scene where one of the girls is eaten (!!!) by the piano is a real stand out for me. It’s just so fabulously mental!

Panos: The scenes with the floating head are funny, but the rest of the film does not work for me.

Hausu did fairly well locally back in 1977, but in the West was nothing more than a curio. The with Master of Cinema and Criterion releases, it suddenly became a cult classic. How do you account for this?

Panos: This is marketing for you. Associating those two brand names with a film, will always give it another chance at commercial success with the western audience, and that is the case here. I guess it was a cult film from the beginning, just for the use of all this special effects, which waited for someone to make it known to a wider audience.

Stephen: It is something that has bothered me about many ‘lost’ cult films, especially Japanese ones that come from this era. There were 4 or 5 big studios that were literally each pumping out a movie a week. And only a fraction of these got any kind of Western release, and there are hundreds that simply have disappeared. So the cynic in me does wonder on occasion if those of us with interest in Asian cinema are sometimes being ‘told’ what is worth watching. In this case? I am glad to be told!

Andrew H: I think that’s exactly why. Before Janus Films (Criterion’s parent company) got their hands on it, it had rarely been shown outside of Japan – and they really made an effort to push it out there. Which explains why many of us – particularly those who loved the Evil Dead films – were wondering where it had been all this time!

The music by GODIEGO is a major part of the experience. Do you feel it worked? And quick quiz question… do you know why many fans of Asian TV shows might know of them?

Panos: I think music is one of its best aspects, since GODIEGO manage to capture perfectly the aesthetics of the film. Probably due to their involvement with Galaxy Express and Saiyuki.

Andrew H: What is this, a pop quiz? After they scored (and appeared fleetingly) in the film, they went on to score Monkey, a Nippon TV programme popular across the globe, but particularly in a dubbed version created in the UK that made it to Australia and New Zealand too. Lesser known is that they also made a concept album about the precursor Japanese TV series that made it to our shores, The Water Margin. Lead vocalist Tommy can also be heard on the Lupin III TV series soundtrack. Okay… so do I win the quiz? Bonus points, surely?

[To be exact, most of the soundtrack is attributed to Godiego keyboard player Mickie Yoshino.]

The soundtrack is, for the most part, bizarrely cheerful – save for ever-darkening versions of ‘Eat’. It’s completely disarming in terms of a ‘horror’ film, but I expect that’s exactly what Obayashi intended!

Stephen: Yes Andy, definitely 10 points to Gryffindor! I love the soundtrack – it is an absolute delight even when taken in isolation. And as a counterpoint to the dark events of the film, it is quite perfect.

Hausu takes every special effect option available in 1977 and throws it up on the screen. How effective do you think they are to a modern audience.

Stephen: It is what it is really. Clearly every available trick was used, and the director himself has stated he didn’t know what the end result was going to be. Some parts work, some don’t. But in a modern world where CGI can create a strangely homogenous viewing experience I found the creativity and inventiveness charming and refreshing.

Panos: I think they are effective only in terms of cultness or hilarity since they are utterly outdated.

Andrew H: The cheesy effects and highly stylised, studio look of the film are entirely deliberate. I don’t think anyone would approach this expecting slick, 21st century effects (not that I necessarily like those anyway). Again I think that’s much of the appeal of the film.

It’s got a terribly dark ending. Do you think this is satisfying after the craziness that goes in in the previous 90 Minutes?

Panos: The ending proves that the script has no coherence whatsoever, it is just a collage of ideas the writers had. In that fashion though, it fits the film.

Stephen: The ending seems totally appropriate to me. It is inspired by the dreams of a child, and clearly is influenced by Fairy Tales. And the original Western Fairy tales certainly were cautionary and bloody tales.

Director Nobuhiko Obayashi would go on to have a successful career, but nothing would be in the same vein as this, his big screen debut. Is there anything in Hausu that you think you can see in his later work?

Andrew H: There are many common threads in his early work. School in The Crosshairs, for instance, has similar special effects and in terms of plot can be thought of as even more bonkers! A lot of the same cast and cameos turn up too, though the film is much more of a kids film, if anything. (Though with some interesting ideas about free thought and conformity.) The surreal aspect may have become tamer, but it’s not like they disappeared completely.

Stephen: I haven’t seen too much of his oeuvre, so I will bow down to our Editor-in-Chief’s superior knowledge here. However, he did make the original 1983 live-action version of The Girl Who Leapt Through Time and the wonderfully dreamy The Discarnates which are worth anyone’s time.

So that’s our Hausu discussion. Are you left cold by it like Panos, or gushing like Andrew and Stephen? Join the discussion and leave us a comment!