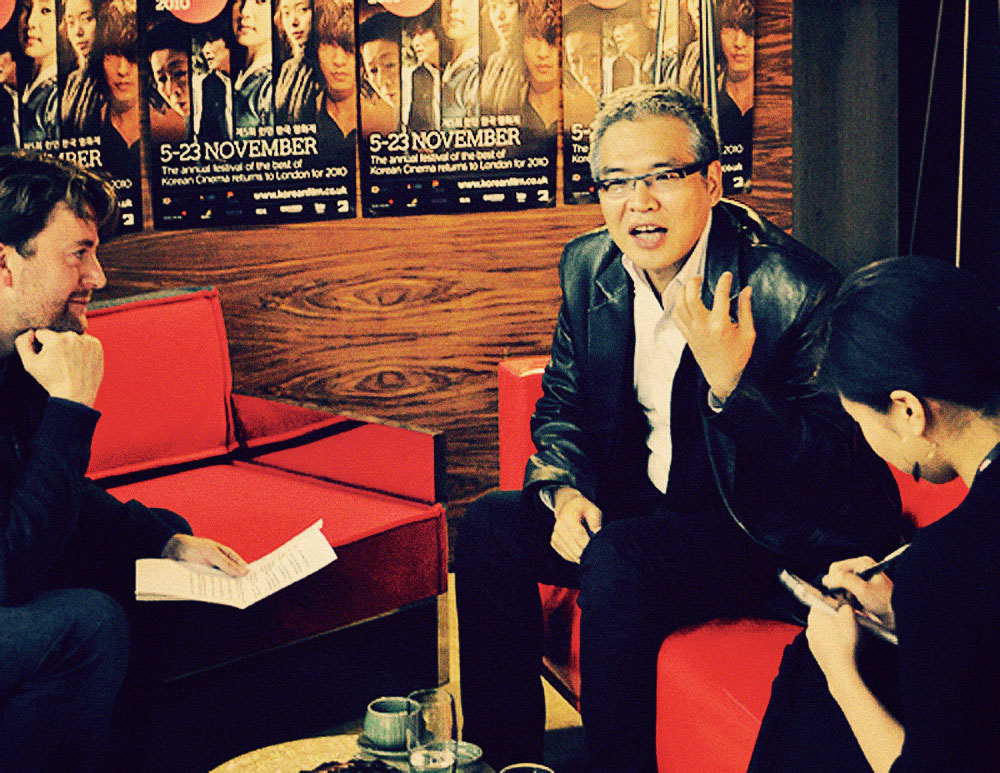 ‘Maybe I should have called it something different!’ Im Sang-soo talks to us about The Housemaid…

Im Sang-soo is still riding the success his film The Housemaid scored at Cannes this year. Though he may have lost out on official plaudits to countrymen Lee Chong-dong and Hang Sang-soo for Poetry and Hahaha respectively, it was his film that actually got everybody talking.

Im Sang-soo is on good form when I meet him at the Korean Cultural Centre. Quick witted and perhaps a little playful with his answers, his face seems almost permanently lit up with grin. (I defy anyone reading this to track down a shot of him with out one!) He has a good understanding of English, needing little help from the interpreter to understand my questions, and even occasionally dropping into English in his replies.

Despite being critically and internationally acclaimed for previous work such as The President’s Last Bang and A Good Woman, it looks like The Housemaid is the film that will finally bring him to a wider audience. Yet it’s been a lengthy gap between films for Sang-soo. He explains after his previous film The Old Garden was released, he went to make a film with French production company, even living in Paris for two years.

‘With the socialist breakdown of the USSR and the Marxist handling of class hierarchy, it may seem a bit foolish to discuss hierarchy once again,’ he tells me. ‘But for me I feel class related issues are still prevailing and very problematic. And it was an opportunity to confront these issues.’

Though he’s keen to distance his work from the original. ‘Other than the core idea that a young housemaid joins a family and ends up having sex with the male owner, with problems arising, the films don’t really have enough in common to describe this as a remake. Maybe I should have called it something different!’ he admits.

‘But regardless if whether you call it a remake or not, there was a 50 year gap between the films, and through that I can depict the changes in Korean society and in Korean peoples mentality, particularly with regard to having an affair and their attitude towards sex.’

It seems adulterous liaisons are quite a common theme of his movies, is there a reason for that?

‘It’s what the market wants,’ he jokes. But he explains he feels that American filmmakers too often shy away from such topics, and its explicit nature – perhaps that’s because American audiences don’t particularly like it. Though it is a part of European cinema, it’s been around for so long that that it doesn’t provide the same interest and curiosity anymore. In Asia it’s still very fresh and new. Such ideas of adultery and sex scenes, maturely dealt with to reflect the male/female politics of everyday life, are what he thinks draws the audiences in.

Of course, Sang-soo has never been one to shy away from controversy, particularly with his use of risqué sexual content, but it was documentary footage for his film The President’s Last Bang that really got him into hot water.

A fictionalised account of the last few hours before President Park Chung-hee’s assassination in 1979, it was always bound to raise a few hackles. In the whirlwind of controversy that surrounded the film, Chung-hee’s only son managed to win a lawsuit that demanded all documentary footage be removed. Sang-soo complied, but retaliated to the demands by replacing it with a blank screen, rather than cutting the film, and it was this version that was released domestically both on big screens and on DVD.

I ask him how the process works for him as a writer and director of his work, does he have a clear picture of the finished film when he starts?

‘I often wonder about is directors who have pre-production storyboards, because I never have storyboards! Although I write my own scripts and my imagination starts to run as I do, actual specific visuals only account for 10%. The remaining 90% comes from discussions with the director of photography and the actors involved.’

‘So until the moment I shoot I do sometimes have difficulties because so little of it is finalised.’

So what about what I read about the house being the most expensive set in Korean filmmaking history, was that true?

‘Definitely not!’, he replies in English. ‘It’s a hundred percent lie to say that the set was the most costly in Korean history. It was definitely made up by the marketing team! It doesn’t matter whether it’s a slum that you are creating, or a big house. The budget is the same, so it’s definitely a lie!’

But obviously, with so much of the film taking place within the house, he put a lot of time into getting it just right. ‘I wanted to create a set that was different from other films, so I managed to get artists and sculptors I know through acquaintances to lend their works to put in the house.’

And how did that help?

‘It created the right image for the film. It’s common for the super rich, both in Korea and the rest of the world, to collect expensive artworks as house décor or to drink imported French wine. And I’m certain that my set and the artwork featured in it have influenced the work of others in Korea.’

‘The interesting thing is that having gone abroad to other film festivals, peoples reactions to the décor are very different: some say the house setting is really nice, while others they’ve never seen anything so ugly! But I take them both as a compliment.’

So what’s all this I’ve heard about Hitchcock? Why was his an influence on this movie?

‘In an interview with Francois Truffaut, Hitchcock described suspense as this: he said if we were here in a situation like this ,with us discussing here and a bomb suddenly goes off under the table, that’s not suspense – it’s a surprise. But if in the scene before you see the bomb being put under the table, and then the audience anticipates it going off, that is when suspense is created.’

‘I see this as the key to suspense, and I wanted to use that in my film. To allow the audience to constantly keep one step ahead of my characters, particularly the housemaid herself, and have them dread what might happen next. That’s when the suspense becomes greater.’

It’s that use of suspense that stops The Housemaid from becoming just an updated Merchant & Ivory or Julian Fellowes scripted examination of the working and privileged classes upstairs and downstairs, and makes it more of a thriller. It also makes the whole piece infinitely more watchable, cutting through any preachy social commentary in the same way J.B Priestley did in An Inspector Calls.

Was there a Hitchcock film in particular? The answer is fairly obvious: ‘Rebecca’, he replies in English, and then double-checks with me, ‘Hitchcock was English, wasn’t he? I love Hitchcock!’

Did any other filmmakers influence him making this film? ‘There aren’t any films in particular that match the violent male protagonists in my film and the depiction of feminine power. But if I am to mention someone who has dealt with similar ideas, it would be the Japanese director Yoichi Sai (Blood And Bones).’

Is there any part of the film he’s proudest of? ‘It’s not the more complex scenes. There are a couple of scenes where it’s simply a dialogue between two people but they are shot very powerfully. Even when I was shooting these scenes I felt very proud and happy with them,’ he laughs.

Yet actually the moment that has made him proudest was the release of The President’s Last Bang uncut in the UK last year, still the only place it has been released in full in the world.

Were there any challenges when making the movie?

‘This is my sixth film overall, and we had to finish the shooting within two months. It was a very tight schedule. Perhaps it’s because it was nice to film, but I felt rather liberated when I shot the film. I was really happy and satisfied, despite not having a lot if sleep at that time. And I felt very happy that my job was a filmmaker.’

Perhaps that’s why he’s quickly following up The Housemaid with another film about Korea’s upper class, having tapped a rich vein of inspiration. He promises it will be ‘a magnified version of The Housemaid, but with more sex scenes and a murder case!’ (Though again Sang-soo is being rather playful – you can be sure they’ll be much more to it than that!)

The script’s even finished, and shooting is due to take place in around February and March. And after? ‘Maybe after this I would love to find a French producer and go back to Paris.’

The Housemaid was screened as the closing gala performance at the London Korea Film Festival 2010.

This interview took place at the London Korean Film Festival 2010. Thanks to Im Sang-soo for his time and Paul Koren, Media & Marketing Manager for the Korean Cultural Centre UK.