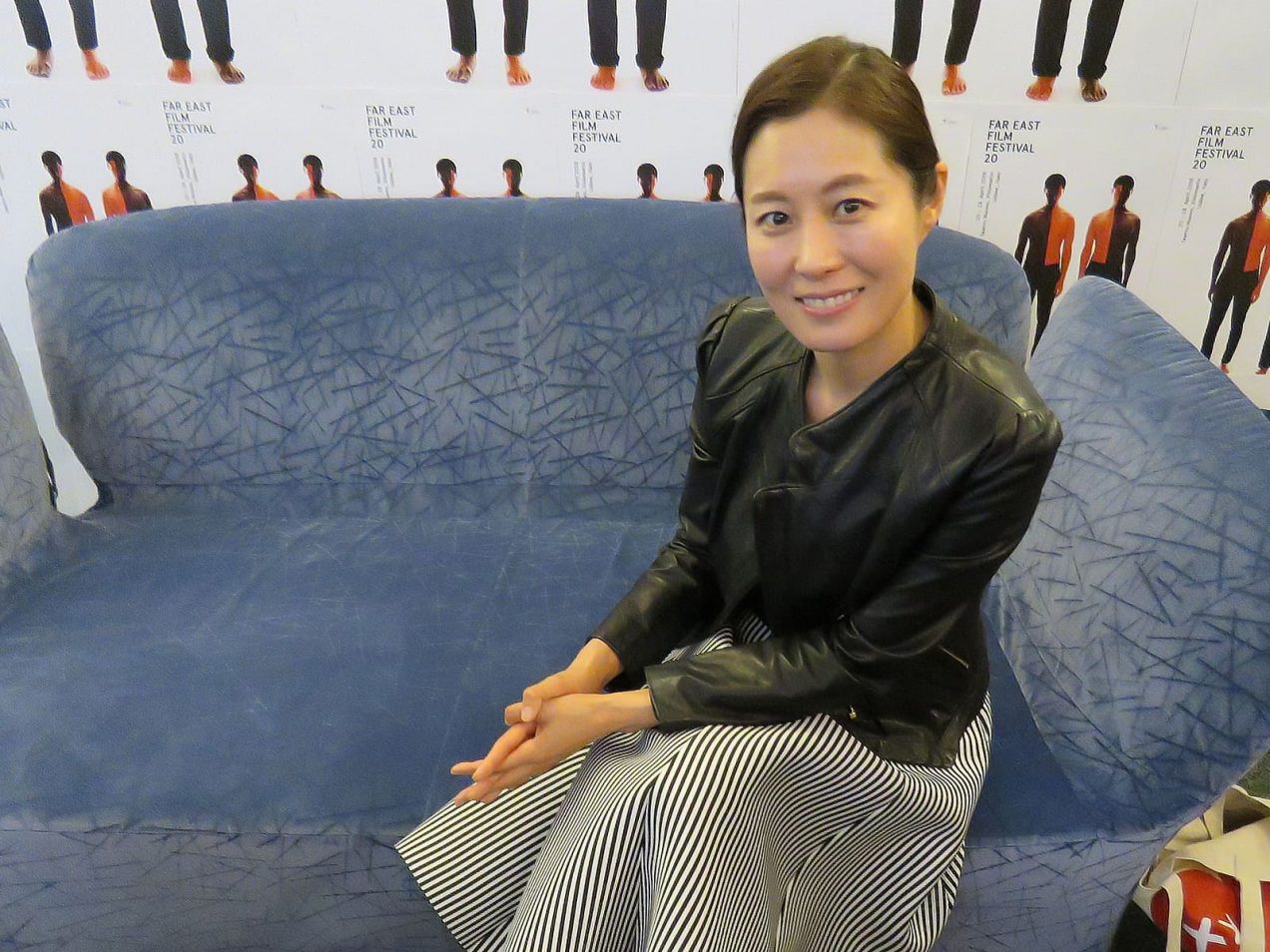 We talk to the Korean actress about her feature film debut…

“Directing takes more courage than acting,” Moon So-ri says as she discusses her directorial debut with her new film The Running Actress, which was screened as part of the Udine Far East Film Festival. Depicting the everyday struggles of a star past her hey-day, Moon So-ri’s first outing as both writer and director is a fascinating exploration of the film industry today.

While it is focused particularly on the Korean film industry, the struggles that her self-titled character faces are easily recognizable in any location. Told through three distinctly different chapters, the film sees its lead character struggle with rude ‘fans’, or the prospect of giving autographs to dentists just so her mother can get a discount on her treatment, and it makes for a charming production.

Let’s start at the beginning – being a well-known actress, what made you want to take the plunge and become a screenwriter and director?

My major in university wasn’t acting or filmmaking, even though I’ve been active as an actress. I thought I wanted to get a proper education. Also, after my daughter was born, in the course of all the big changes that took place in my life, I felt like I needed to learn more about filmmaking, so I enrolled in graduate school, to learn more. There, I wrote and directed a short film. That’s how it started.

What was it like, your first experience as a film director?

First of all, I felt very sorry to film directors; I felt pity for them because they are very lonely. As an actress, I decided to behave better and be kinder. (Laughs) I felt that directing takes more courage than acting, because you need to be big yourself, more than an actor or an actress. Also, I felt that the job of a film director requires a lot of responsibility.

In the third act of your film, there is a discussion about the film director, about the kind of person he was. There is a discussion if a person – a personal life affects art or not, for example in connection with what is now happening with Woody Allen. Was it a coincidence that you put this in the film, and what is your opinion on this?

I feel really ashamed because I brought up the topic of art while making this film; however, it is a topic that really cannot be avoided and the film is also about art. I haven’t reached the final conclusion on this topic yet myself, and it isn’t a conclusion that could be made easily. The thoughts in the process of life change, and I still don’t know what art is, but I think that I can say – that I can answer – what an artist is. The artists, I think, are the ones who seek beauty; the concept of beauty can be different for every artist, but they devote their lives and themselves and their lives to pursue that beauty they believe in. In the concept-making of the third segment, I thought about this; whether I became a supporter or a friend to the artists I have worked with, and is there any beautiful values that I want to seek in my own life… I asked myself these things while making the third segment.

You mentioned that you studied filmmaking and had to make short films while you did so; in this film, it feels like each segment is a separate short film even if they share the same main character. Was it your intention to make three short films and put them together?

It was my first time as a filmmaker, so I made short films to begin with. In the process of making these short films, I didn’t think about making them into a feature, but then I felt that these three segments move in a single direction. This film, and each of the segments, focused on an issue from my life – with all the joy and the pain that went with it – and I thought that they could be both very personal and very general topics to present to the audience. After I finished making the three short films, my colleagues told me that it would be a good idea to make them into a feature, so when I ultimately connected them into one film, the process felt very natural.

In the process of screenwriting and directing, where did you decide to set the line between personal and general?

I didn’t think that there was a line that could be drawn. What’s personal can also be seen as general, and people say that in oneself, there is a whole universe. But, I feel that the attitude is very important when you’re making a film; if you want to share your thoughts with the audience, then things that seem personal to you can be interpreted as general by the audience. Whereas the general ideas, sociological issues, can be seen by some as personal.

Every time I watch a film that has long takes with a lot of dialogue, I always wonder – was it strictly scripted, or was there room for improvisation? What was your approach?

Since it was my first film I can tell you that 100% of the dialogue was scripted; I wasn’t relaxed enough for us to improvise! Some of the people that I cast in the film were not professional actors, so I rehearsed a lot with them, even with the child actress; I gave her specific dialogue. Maybe if I make another film, it will be possible for me to allow improvisation, but for this film, everything was planned in advance!

This film looks closely at the struggles that actresses face within the Korean film industry; did you have a particular message that you wanted to send out through the story?

I feel really lucky and thankful that I have had the chance to work with good directors and actors; after watching this film, many people said that it criticizes the Korean film industry, but I just do whatever I can do; I want to look at ideas that are meaningful to me. It can be seen as criticism, but also as a healing process, in a way; but I do have a very strong affection for the Korean cinema and the Korean film industry. If I continue to look at the topics that are meaningful to me, then some people might feel criticized or won’t feel my support, but it is meant to be perceived as healing.

The #MeToo movement is a hot topic in Korea right now; is there anything you would like to say about it?

Big question! When my film was released in the autumn, there was a huge discourse regarding feminism in Korea, and thanks to that, there were a lot of discussions connecting my film and the issue of feminism; I felt really thankful about that. Now, the #MeToo movement in Korea… It means that many people in Korea are going through a hard time now, not just the victims and the offenders, but also people who were there when it happened. But, I think this is a time that we have to go through; of course, it is very painful, but we need to go through the pain in order to heal. Also, in the film industry, there are a lot of trials and movements to make the situation better. There are discussions about sexual equality not only in the film industry, but also in the world of theatre, and in other cultural professions. It’s very hard and painful right now, but it is a period of time that we need.

The Running Actress screened as part of the 20th Far East Film Festival 2018.

Interview by Roxy Simons, conducted alongside Sanja Struna of View of Korean Cinema and Geza Csakvari of Nepszava. Cover photo by Sanja.