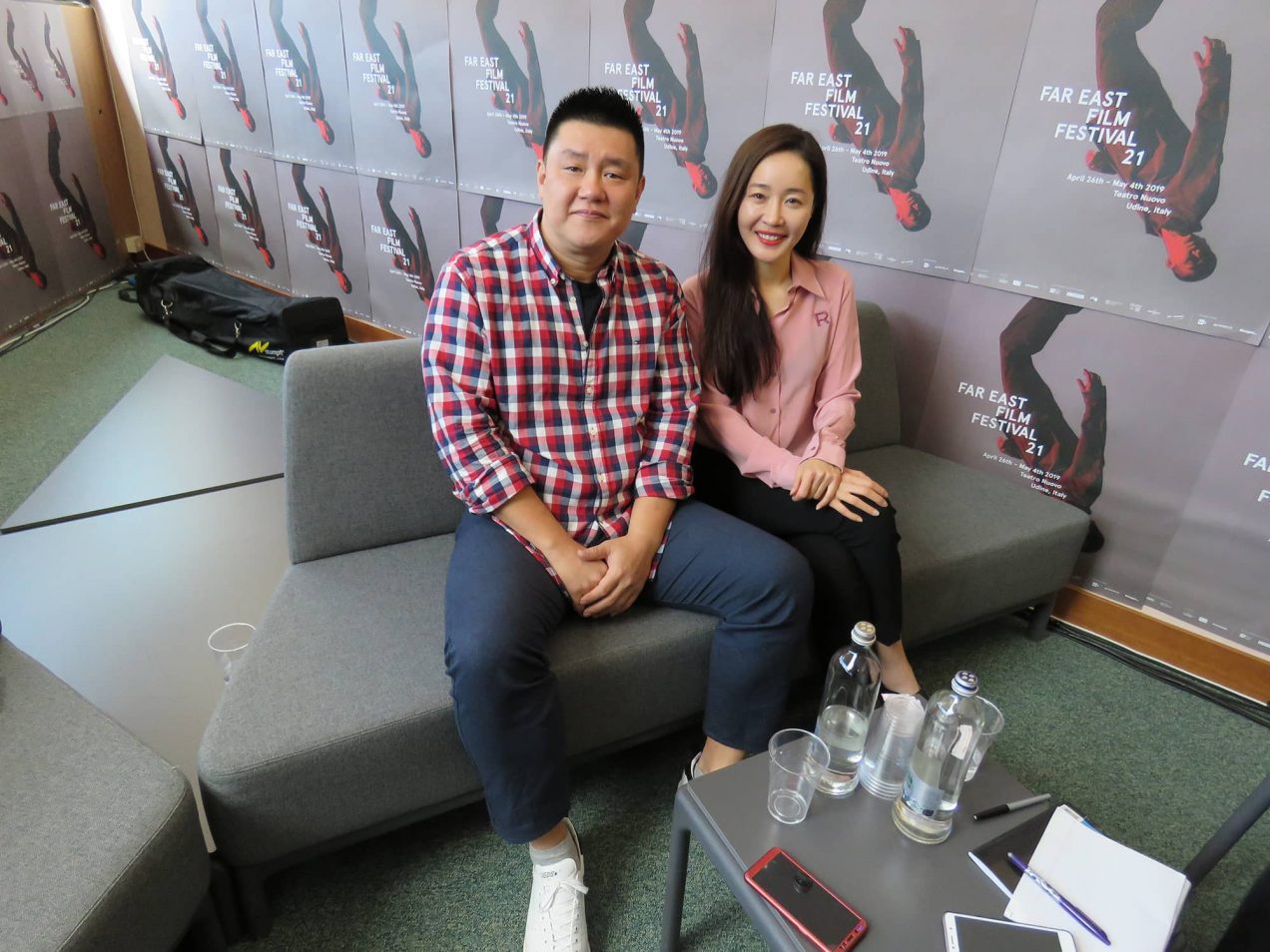 We talk to the director and star of quirky zombie comedy Odd Family: A Zombie on Sale…

Given the success of Japanese film One Cut of the Dead at last year’s festival, it stands to reason that the Udine Far East Film Festival will pick another hidden gem from the zombie comedy genre, this time from South Korea. Odd Family: A Zombie on Sale is a film that lives up to its namesake, and then some. Revolving around the Park family, consisting of father Man-deok (Park In-hwan), his three children, Joon-gul (Jung Jae-young), Min-gul (Kim Nam-gil), Hae-gul (Lee Soo-kyung), and Joon-gul’s no-nonsense pregnant wife Nam-joo (Uhm Ji-won), Lee Min-jae’s directorial debut is a laugh-a-minute.

Following the rural family as they try to make a living in the boonies, one day they come across a rogue undead man (Jung Ga-ram) roaming around town who suddenly bites the family patriarch Man-deok. Inexplicably returning him to a more youthful state, the family decide to use the young zombie (who they have lovingly named Jjong-bi) to make a quick buck out of the town’s elderly residents. What they don’t quite consider, though, is the possibility of a zombie outbreak. Co-written by Lee and his wife Jeong Seo-in, Odd Family has an incredible comedic timing and a stellar cast at its heart. The director and actress Uhm Ji-won were on hand to discuss the film with easternKicks…

It’s hard to believe that this is your directorial debut, it was very impressive. How did this come about?

Lee Min-jae: I majored in directing in university but after I graduated I worked as an editor. My wife is a scriptwriter, so we wanted to make a film that we wanted to watch. It took almost ten years to make, but we wrote it together and then we prepared for this film.

Since the success of Train to Busan there have been several zombie films to come out of South Korea, but this is very different because it approaches the idea from a comedic perspective. Why did you want to write a story like this?

Lee Min-jae: When I was developing this story, I didn’t intend to make a comedy; I wanted there to be various genres that appear in this film overall, and I wanted to create something special. Of course, those other zombie films were also great.

What made you, Um Ji-won, want to be a part of this project?

Um Ji-won: I liked the concept of the story, I felt that it was unique because normally zombie films are very scary, but he portrayed this genre in an ironic way, so I really liked it. Normally, I play lead characters and there isn’t this element of family in a film, and I liked the concept of this family who are living in the countryside and are very organised, they stick to each other, each character is unique. So, when I first read the script I thought it was a unique concept, so that’s why I joined the project. Also, all the other actors are great talents in Korea, of course the actor who played Jjong-bi is a newcomer, but apart from him the others are all wonderful actors, so I wanted to work with them.

The film has an interesting take on masculinity, the women are very strong and make all the decisions whereas this whole mess starts out because men want to become younger. All the zombies are also all men to begin with, was this intentional?

Lee Min-jae: I felt like the desire to become young and get their sexual prowess back is something that is a general instinct all over the world for men. When you see the wedding scene [just as the zombie outbreak begins], I intentionally divided the male and female guests, so that eventually the male zombies would attack the female guests. When you have problems as a child you reach out to your mother, and when you get older you reach out to your wife, so in the end I feel like it’s women who rule the world. Maybe it’s only my opinion, but I do think that.

Um Ji-won, you are known to prepare for your roles well and you have portrayed very different characters on screen. How did you prepare for the role of Nam-joo, and did you add something to the character yourself?

Lee Min-jae: I thought it might not have been very easy for her to take on this character, so I’m very grateful. Eventually, she expressed Nam-joo’s character well and made her more down-to-earth and real.

There is a lot of slap-stick comedy in the film, but for you and the other actors were there any funny moments on set?

Um Ji-won: There were many funny moments, because Nam-gil and Jae-young’s characters are very humorous. For example, while we were shooting my character’s concept was that she couldn’t smile but they’re very funny guys, so I would be trying not to laugh. While filming the scene where our characters are re-opening the gas station we had a time limit, the whole family had to take a picture in front of it and my character was meant to be emotional in that scene. I really wanted to channel those emotions, so I tried to focus on that but Joon-gul (Jae-young) and Min-gul (Nam-gil) were messing around and shouting. The sun was going down and we didn’t have so much time, only 15 minutes to shoot the scene, and we only had two or three takes left so I was so pissed off. I told them to shut up and then Joon-gul was like ‘Min-gul stop it, she wants to show her emotions’ and I said, ‘no, oppa you ruined my emotions!’ Because we didn’t have time it was done in only one take, so those kinds of funny situations were always happening.

Lee Min-jae: They became a real family while shooting, so they were always messing around! 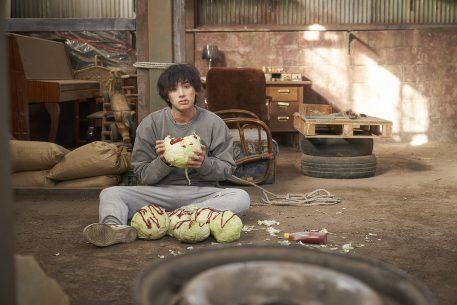 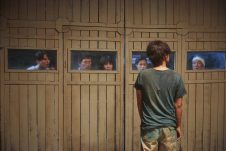 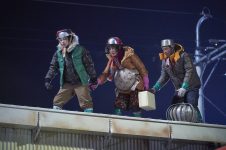 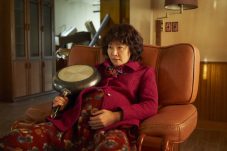 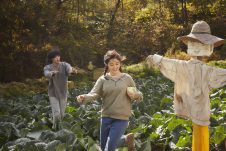 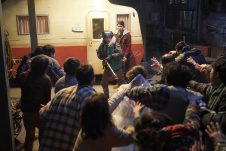 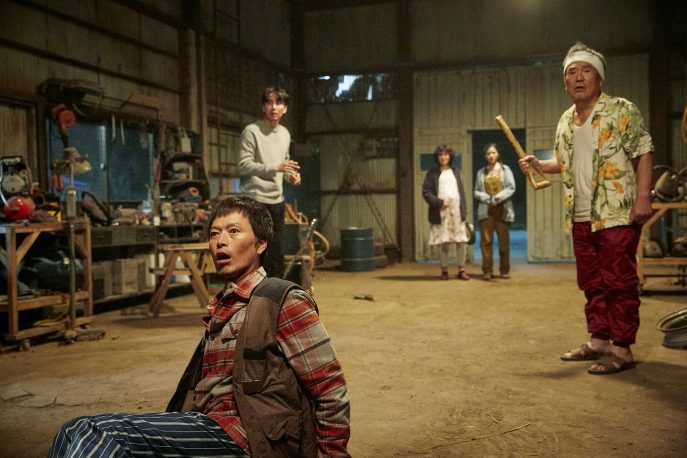 Regarding family, the title referred to them as an Odd Family, but they weren’t that weird, they’re dysfunctional like all families but they stick together and that’s why things work out. What was your take on this?

Lee Min-jae: The title Odd Family isn’t about the main family in this film, they aren’t odd but when you add Jjong-bi as a family member then it became odd. All the situations are within the family, they are a micro-universe, so that’s one of the reasons why I feel like it’s important for them. Family is the only thing that you cannot choose, you are destined to be born with your parents, it’s one of the only things in your life that you can’t choose so that’s why I wanted to focus on this theme.

Your career began in editing but then you became a director, what was your biggest challenge and what gave you the biggest joy while making this film?

Lee Min-jae: This was a commercial film, but it had a lot of twists in it. So, it wasn’t easy for investors to support it, and it was the same for the actors, they have huge careers but right after they read this script they said yes, and that was the most joyful moment. At the same time, I wondered why they chose this movie, why did they believe in me? In terms of the most challenging thing, I felt like filmmaking was the only thing that I wanted to do, and being an editor helped me to learn a lot but eventually I was just working on other people’s films, not my own work, so I wanted to make my own films. My wife, who is the script-writer, also gave me a lot of support.

The audience’s response was great, how did it feel for you to come here and get this reaction?

Um Ji-won: I was wondering if this is a normal reaction, I felt like that it might be bigger, but I needed confirmation. We were happy last night, we were watching and laughing together with the audience, and the reaction made us so happy because we screened the film in Korea in February, and a few months later we came here, and we felt the same thing. But in Udine the reaction seemed even bigger than in Korea, while we were screening the film people were clapping and shouting, it’s like in a movie! Their reaction was cinematic.

Lee Min-jae: At first, I was happy to be invited to Udine because one of my favourite directors is Federico Fellini, so I was happy to show my film in his home country. During the screening, I was wondering if it was normal for every film to get this reaction, and then after I heard it was bigger I was a little overwhelmed, so I walked back to the hotel while enjoying this feeling.

Odd Family: A Zombie on Sale screened as part of the Far East Film Festival 2019. It is released on UK Blu-ray as Zombie For Sale on 6 July 2020 by Arrow Video.

Interview conducted by Roxy Simons alongside Sanja Struna of View Of The Arts, and Adriana Rosati and Oriana Virone of Asian Movie Pulse. Cover photo by Sanja Struna.