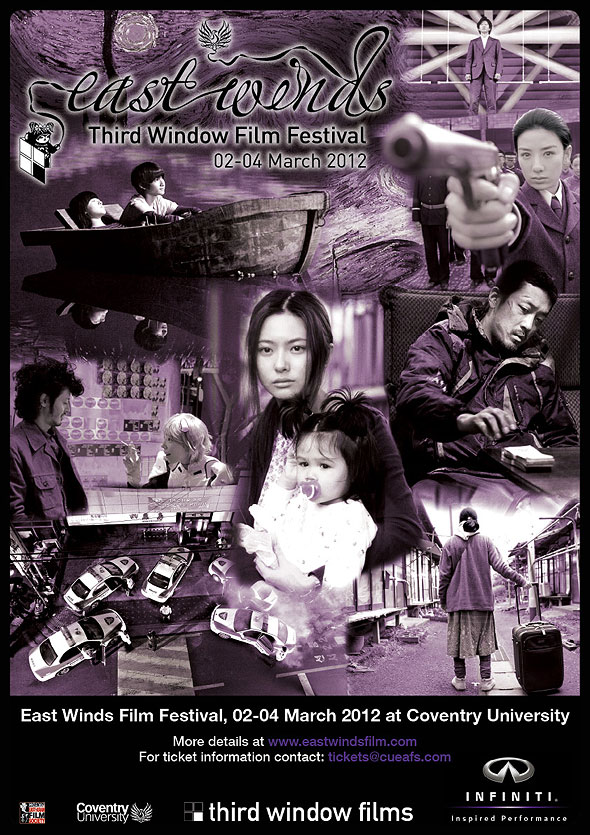 Third Window Films in association with CUEAFS and Coventry University will be hosting their annual East Winds Film Festival on the weekend of 2nd-4th March, 2012.

East Winds Film Festival was created with the purpose of bringing East Asian cinema to a University campus under the premise that the film festival is predominantly run by and for students, therefore making it one of its kind in the UK. The festival, despite only being in its 2nd year has drawn large international attention due to the way it operates, and this year sees Nissan sponsor the event as well as welcoming many world renowned film-makers and actors in attendance.

This years’ lineup of films includes a retrospective of Japanese film-maker Miki Satoshi (Turtles Are Surprisingly Fast Swimmers, Adrift In Tokyo) who will attend along with his regular actress Fuse Eri. There will also be a double-bill of feature films from legendary Hong Kong director Herman Yau, who will also be in attendance.

Other screenings include the European Premier of Taiwan/China co-production Starry Starry Night with a Q&A from director Tom Lin as well as screenings of Yuya Ishii’s follow-up to Sawako Decides with Mitsuko Delivers; the South Korean blockbuster smash The Yellow Sea and the European Premier of the acclaimed short-film BloodTraffick starring rising actress Grace Huang.

» Find out more about at the official East Winds Film Festival website.