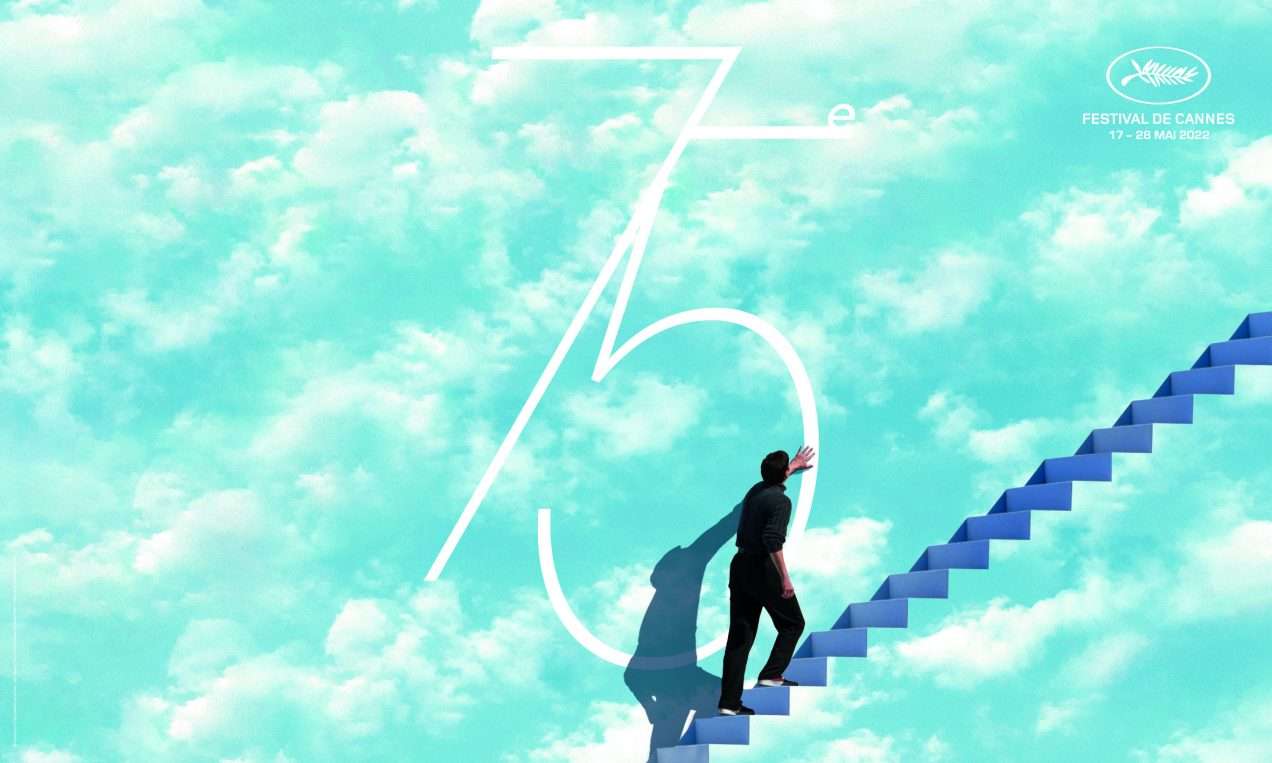 The short films competition features Cannes debutants as well as returning filmmakers. The lack of full-length Chinese titles in the programme has already been mentioned in the first part of the overview here, selecting four Chinese short films seems to be a way to compensate for the absence. Below is the second part of the summary in which we discuss East/Southeast/South Asian short films and restored classics to be screened at the 75th Cannes Film Festival: 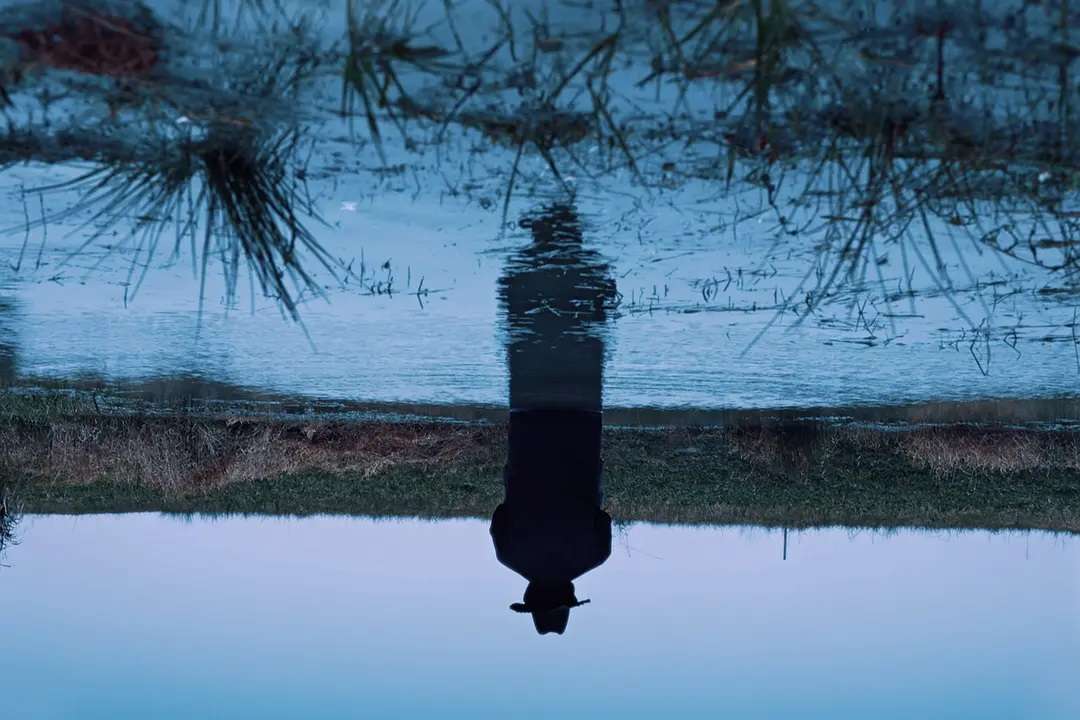 After Long Day’s Journey into Night which premiered in 2018 in the Certain Regard section, Bi Gan returns to Cannes with A Short Story (Posui Taiyang zhixin 破碎太阳之心) It is unclear if the version screened in Cannes will be just the same as the one published earlier this year, but Bi Gan’s short film is definitely an interesting take on the commercial advertisement. A Short Story is an ad for pidan, which is a brand focusing on creating products for cats. In the short film Bi Gan weaves a fairytale narrative in which puss in boots-like character visits other fantastical creatures. Visually interesting, A Short Story features heavy metaphors. 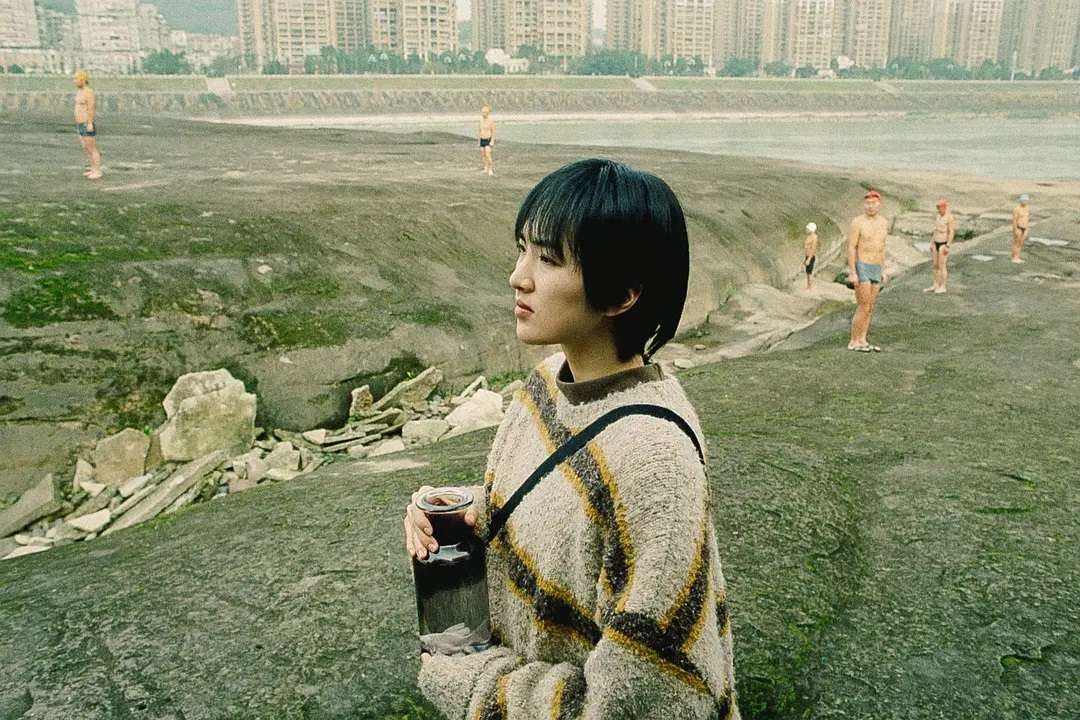 The starting point of the story in The Water Murmurs (Hai Bian Sheng Qi Yi Zuo Xuan Ya 海边升起一座悬崖) is an asteroid that hits the Earth leading to underwater volcanic eruptions. The prospect of a gigantic tsunami causes the inhabitants of a small riverside town to flee inland. Before she leaves, Nian (Annabel Yao) decides to say goodbye to her hometown and her childhood friend. Her memories start to become clearer and clearer as she revisits places and images from the past. Director Chen Jianying (Story Chen) creates a 15 minutes journey that attempts to exceed the boundaries of space and time. 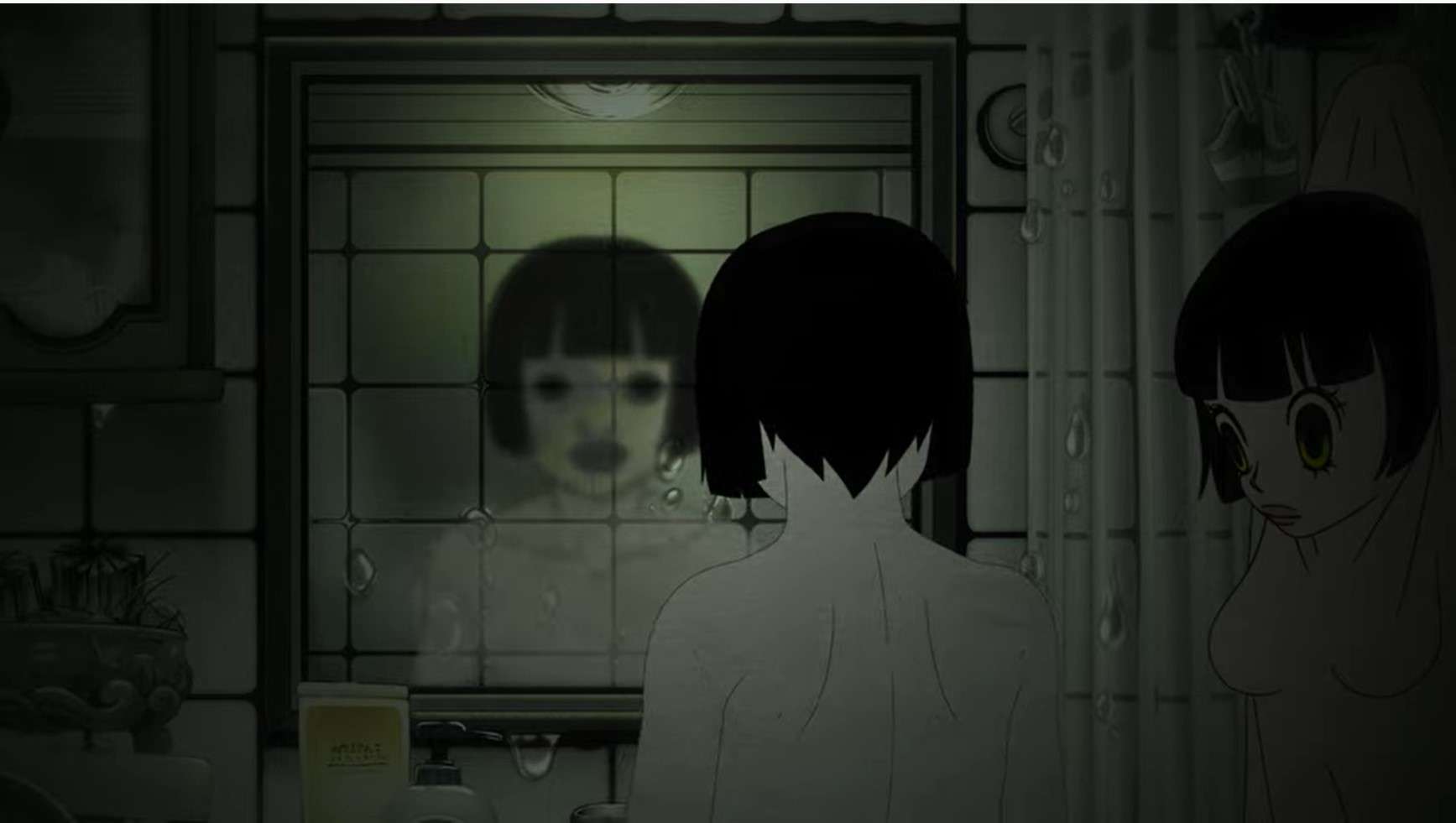 Moon Sujin’s Persona is a 6-minute animation about the process of being encroached by the persona. In recent years South Korean animations delivered some of the most interesting horror stories in contemporary Asian cinema, from Soul Station (2016, dir. Yeon Sang-ho) to Beauty Water (2020, dir. Cho Kyung-hun). The output is not as big as in Japan but leaves a strong impression. After watching the short clip it seems that Moon Sujin’s Persona has a Satoshi Kon vibe about it, which makes it a must-see at Cannes. 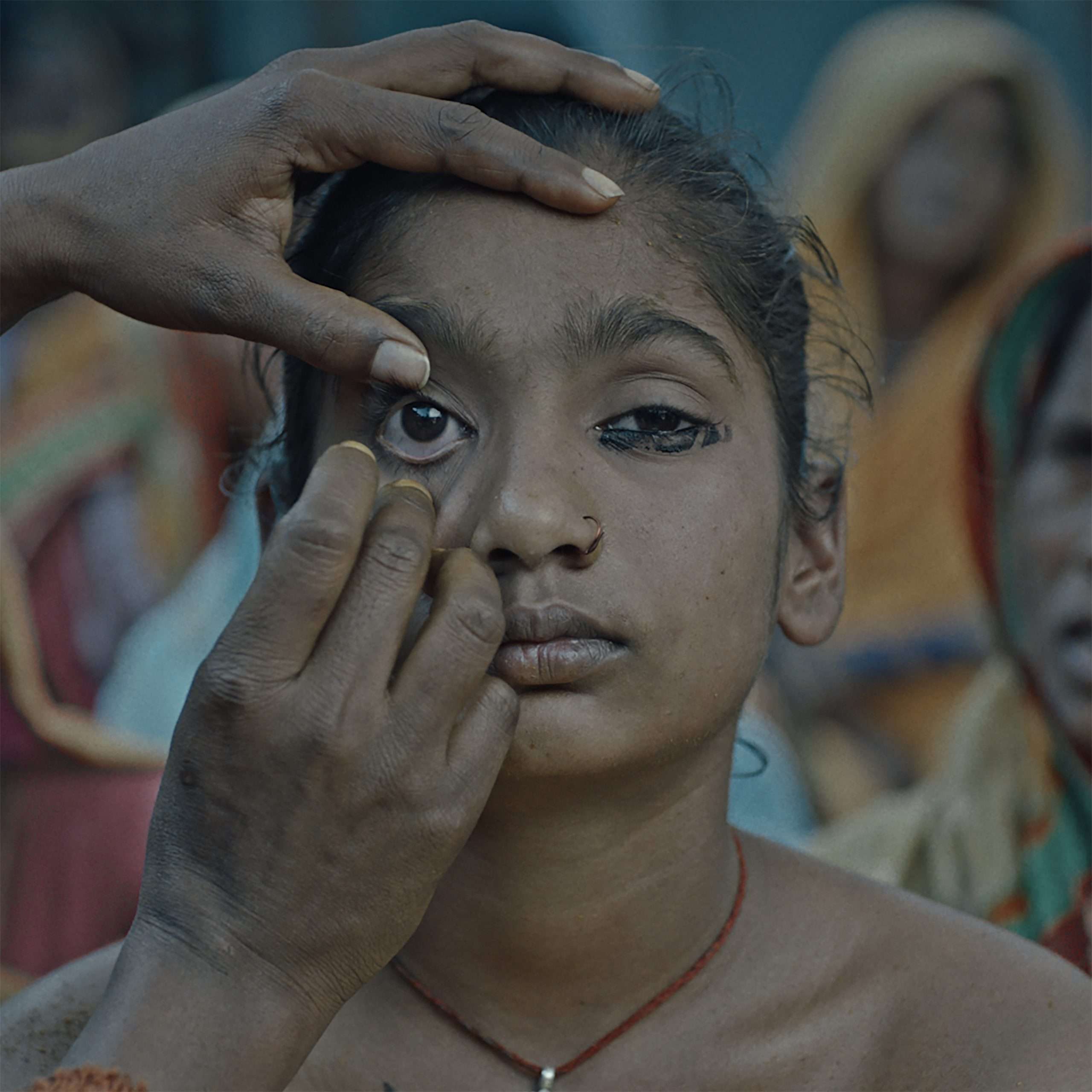 In the Nepalese short film Melancholy of my Mother’s Lullabies a mother sings lullabies to her 12-years-old daughter in order to calm her down. The song enchants the reality but when it ends the girl reconnects with the world surrounding her and life-altering events that are ongoing. Abinash Bikram Shah explores the boundary between fiction and reality in his 14-minute work. 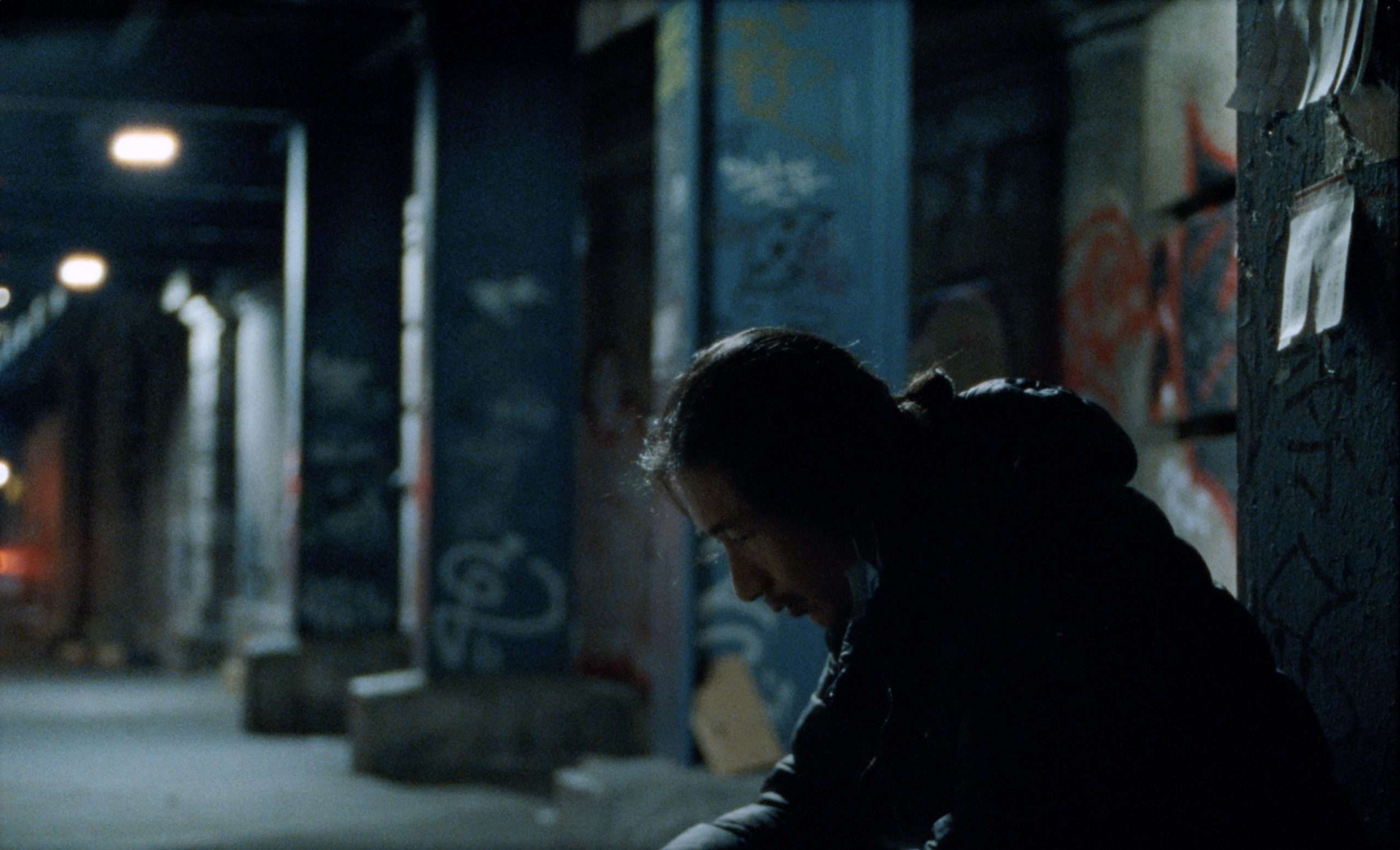 The premise of Same Old resembles a contemporary rendition of Bicycle Thieves (1948, dir. Vittorio De Sica) set in the harsh world of food delivery service in New York City. In Lloyd Lee Choi’s short film the main character spends the night trying to find his stolen e-bike. The filmmaker dives deep into the extreme precarity and the lack of security nowadays that disturbingly echoes the job market and difficulties of everyday life in the immediate aftermath of World War II. 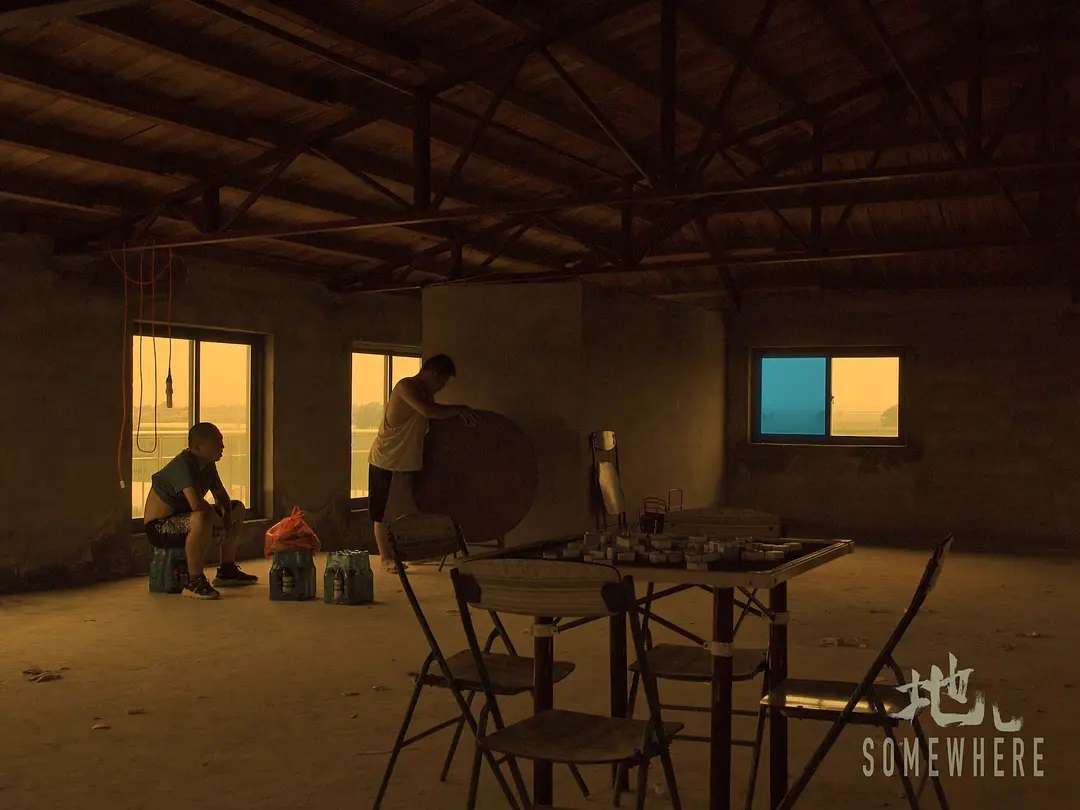 LI Jiahe’s Somewhere (Di er 地儿) immediately catches attention with a decisive visual style: the colour palette is limited to dark yellow and blue. The project made under the auspices of Hebei University of Science and Technology School of Film and Television China revolves around a beer drinking party organised by the owner of a paper mill “Fat man” and his employee “Blurred”, in order to celebrate the release of “Bald head” from prison. At one point “Blurred” gets missing and “Fat man” and “Baldhead” start to search for him in the nearby woods. Somewhere in between parable and mystery. 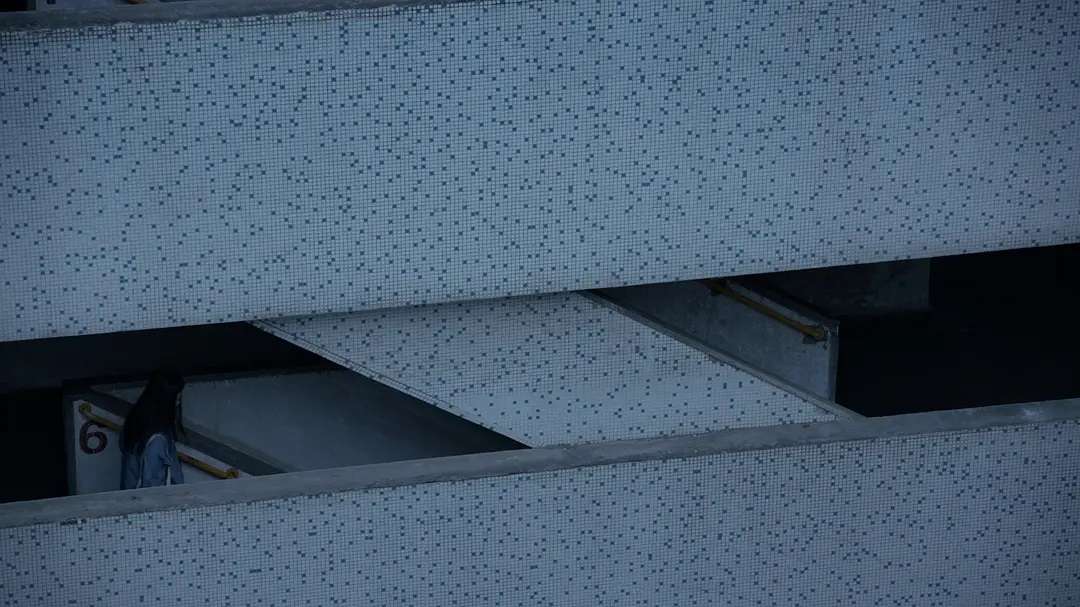 In The Silent Whistle (Fengzheng 风筝), 19-year-old girl Ming, a loner who works at night shift in a convenience store, is invited for a “special” Spring Festival dinner by her neighbour Rui. The stranger makes her recall some details from her past she had been running away from. The stunning cinematography in Li Yingtong’s short film is enough of a reason to watch the 18-minute piece. Completed at Emerson College USA, The Silent Whistle promises suspense and low-key drama. 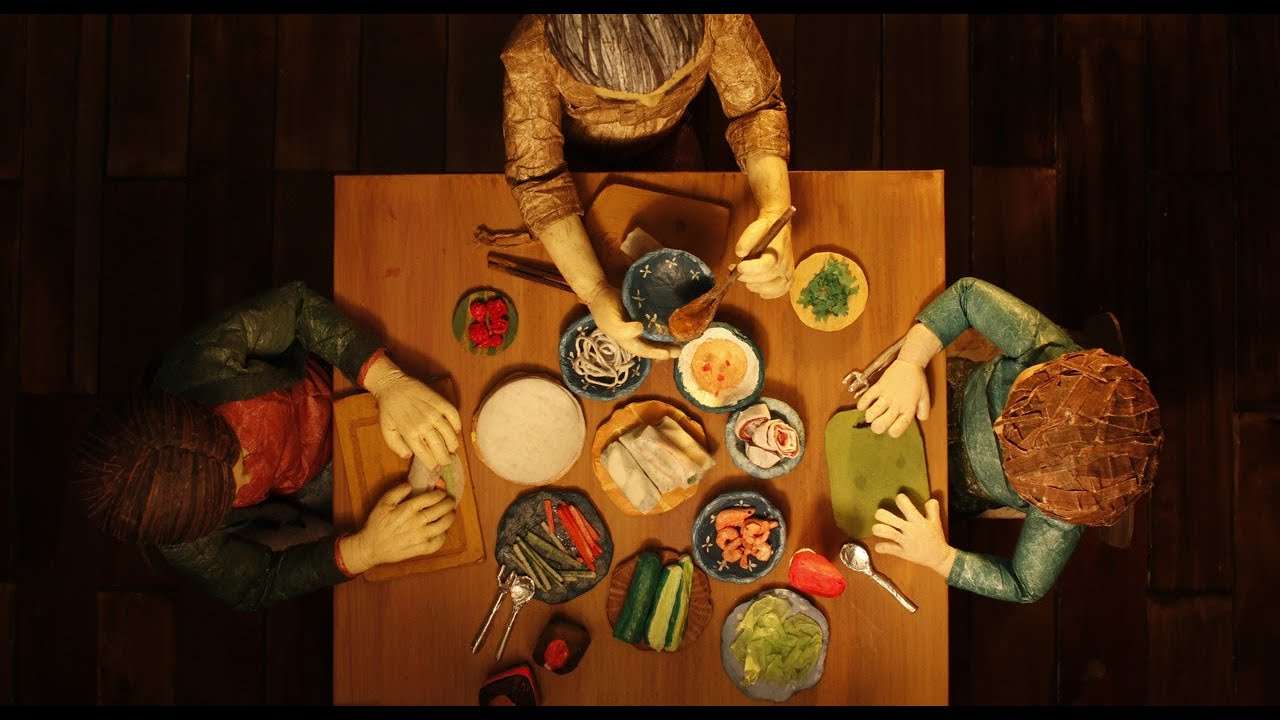 Animated short film Spring Roll Dream directed by Mai Vu is a vignette of the Asian American family life. When Linh’s father visits her in America and insists on cooking a traditional Vietnamese meal for the family, the dinner takes on a life of its own, confronting Linh with her past and culture. Produced in the National Film & Television School in London, Mai Vu’s short film has a distinct subtle visual style featuring stunning stop-motion animation. 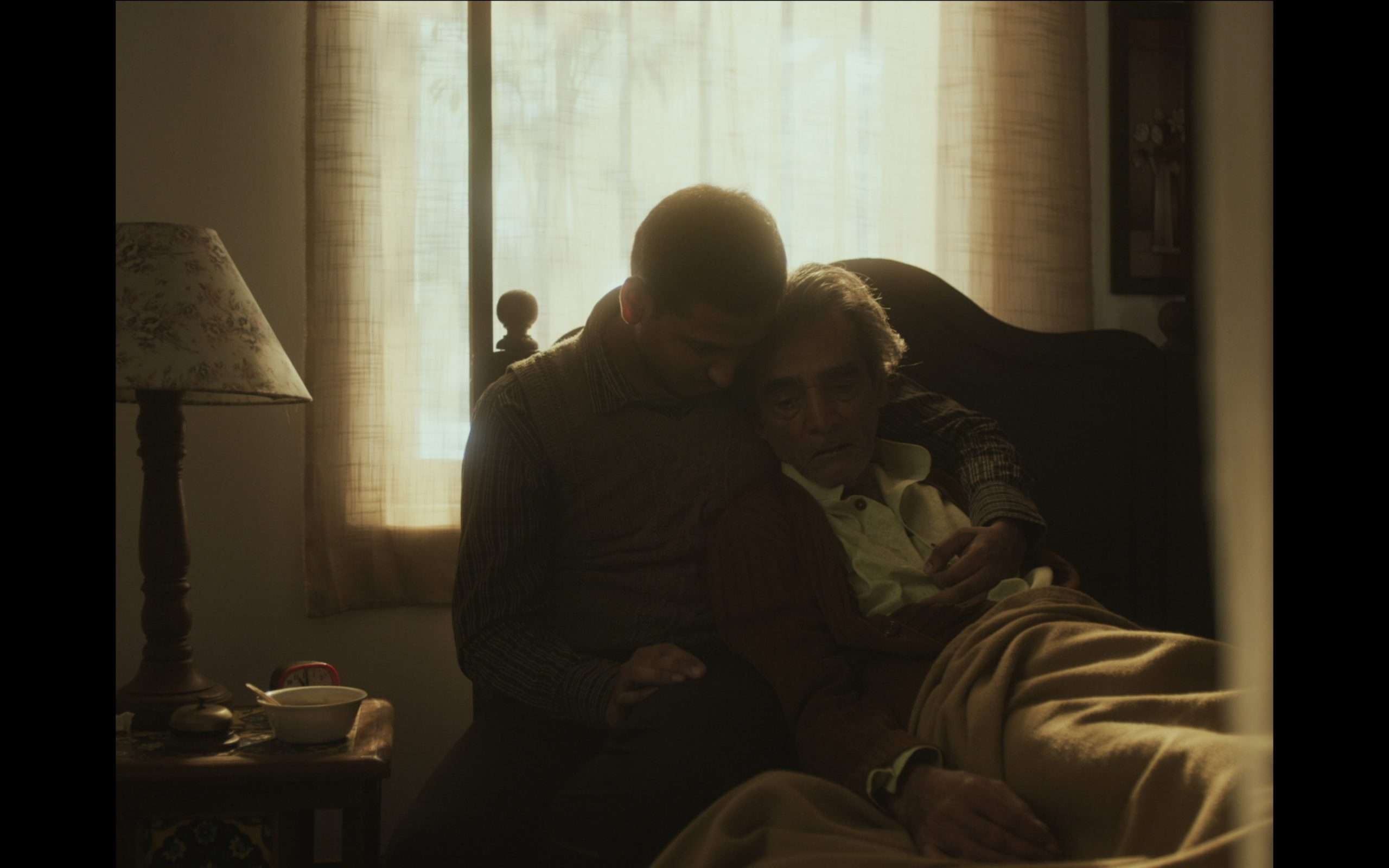 In Pratham Khurana’s Whistling Woods 22-year-old boy undergoes a major spiritual transition while he is taking care of a 75-year-old dying man. In this unconventional coming of age story, grieving is the catalyst of change. By highlighting the importance of intergenerational exchange of experiences, Pratham Khurana retrieves something that often gets missing but necessary to grow: the sense of continuity amongst the change. 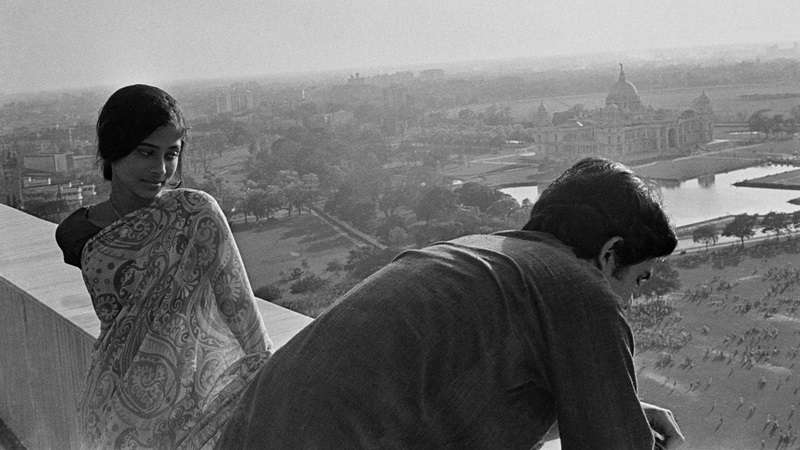 Restoration of the rare movie directed by one of India’s most celebrated filmmakers will be presented in an exclusive screening. Satyajit Ray has been returning to Cannes several times since 1956 when his film Pather Panchali entered the main competition and was honoured with Best Human Document award. Pratidwandi is the first part of the Calcutta Trilogy. Based on the novel by Sunil Gangopadhyay, it tells the story of Siddharta, a middle-class intellectual torn between two currents: revolutionary and conversative. Set against the backdrop of late 1960s social unrest when corruption and unemployment were rampant, Siddhartha faces the dilemma of the choice between idealism and practicality embodied by revolutionary activist brother or his career-oriented sister respectively. Presented by NFDC – National Film Archive of India, the film is restored under National Film Heritage Mission, a project undertaken by the Ministry of Information and Broadcasting, Government of India. The original 35mm Camera Negative, which was scanned in 4K on ARRISCAN XT, and the original 35mm Sound Negative were provided by producer Ms. Purnima Dutta for this restoration. Few portions of the negative were damaged and were instead scanned from a 35mm Release Print. The restoration was carried out by Prime Focus Technologies, Mumbai, and grading was supervised by renowned Indian cinematographer, Mr. Sudeep Chatterjee. 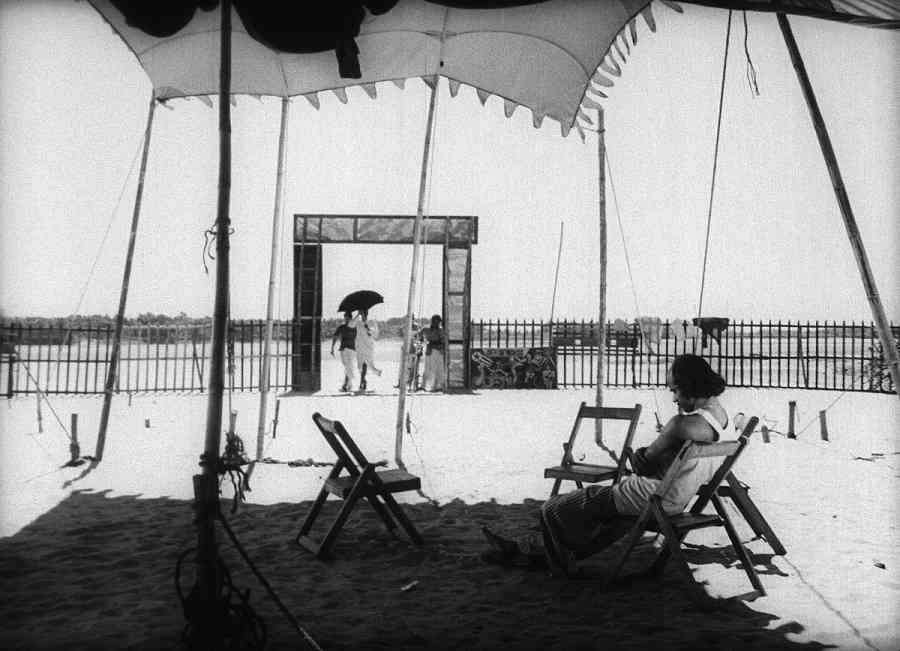 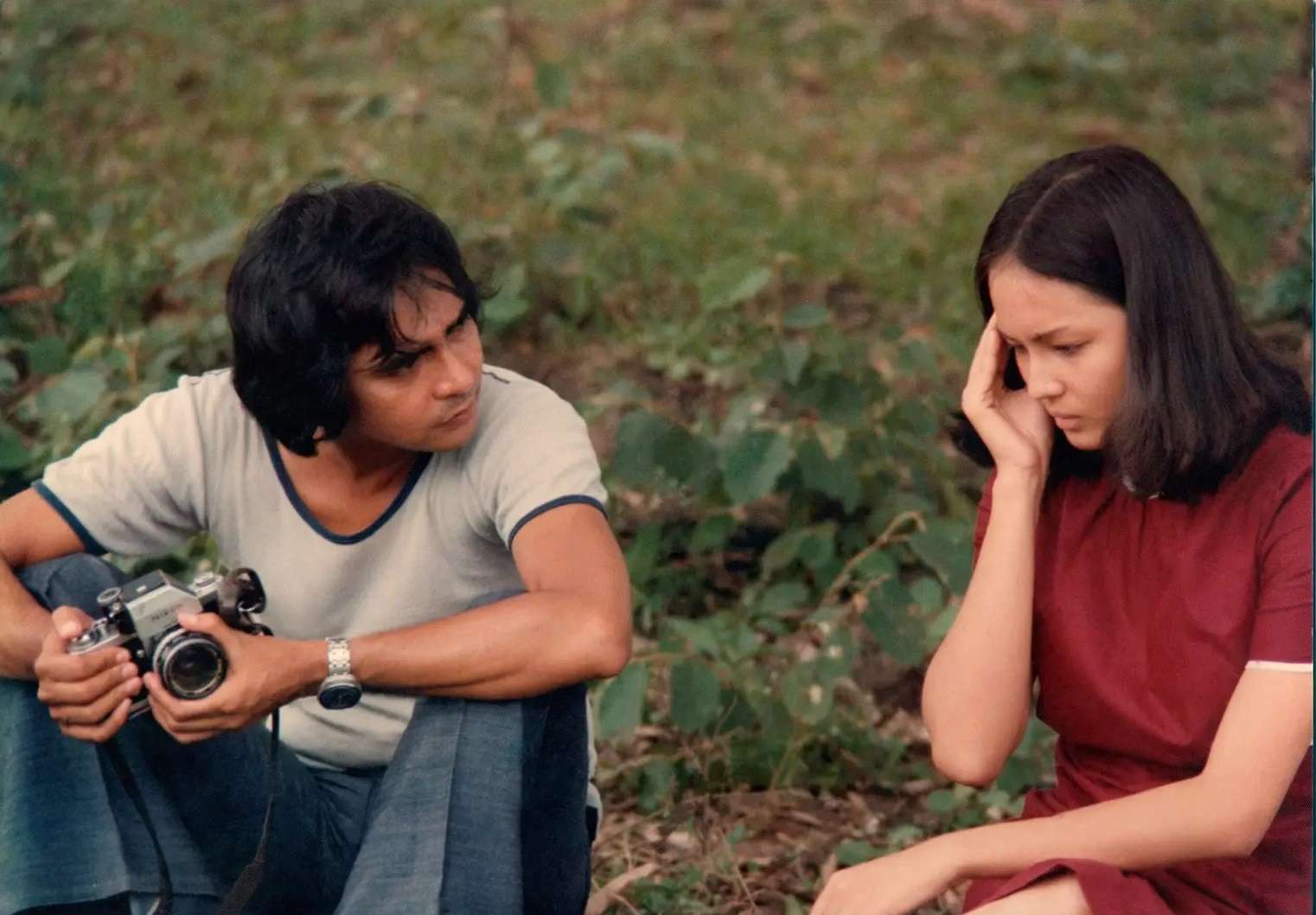 The 1970s was the moment when Philippines cinema entered the international stage with films directed by Ishmael Bernal and Lino Brocka. Mike de Leon did not travel as widely (his 1984 film Sister Stella L. was nominated to Golden Lion at Venice Film Festival), but secured a strong status in the domestic market with his genre-infused dramas. Itim revolves around an occasional return of a young man to his provincial home. He gets involved with a woman who is ultimately possessed by her sister’s spirit, paving the way to revealing the painful truth about the woman’s mysterious disappearance. The restoration of Itim was done using the original 35mm negative and optical soundtrack, stored at the British Film Institute. The negative, scanned in 4K, benefited from a 2K digital restoration done at the Immagine Ritrovata Laboratory, Bologna. Colour grading was supervised by the director, Mike De Leon, and his co-director of photography, Rody Laccap. This presentation is a preview of the French release of Mike De Leon’s entire restored body of work, slated 2022-2023.

75th Cannes Film Festival runs from 17th till 28th May. Check out festival website for more info on the line up.