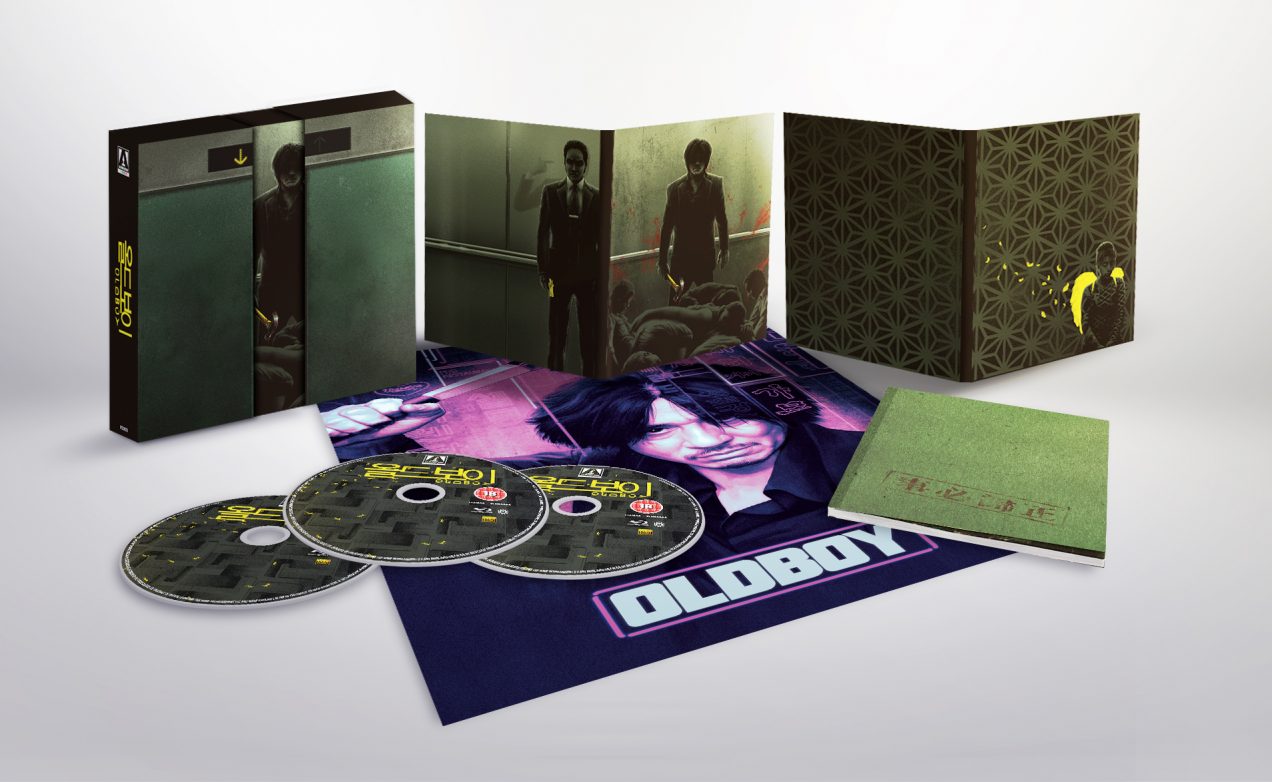 UPDATE: This is now to be released as a four-disc limited-edition Blu-ray set, including Lady Vengeance and Sympathy for Mr Vengeance pack with extras.

Arrow Films recently made an announcement – the lyrical modern classic of the revenge genre Oldboy has been newly mastered in 4K and it is presented in a stunning limited edition three-disc set.

This special set comes with a massive array of extras including the feature-length documentary Old Days, three hours of bonus interviews, and a 100-page hardbound book and a fold-out poster.

There is also a two-disc set bursting at the seams with extras and a standard DVD version.

Oldboy is cited as one of the best films of 2000s and a great example of extreme Asian cinema.

Directed with immense flair by Park Chan-wook (The Handmaiden) as the second instalment for his Vengeance Trilogy, Oldboy made its spotlight at the 2004 Cannes Film Festival. There he was praised by the President of the Jury, Quentin Tarantino.

The film became a huge international smash. The audiences are impressed with its concoction of filmmaking virtuosity, ingenious plotting, violence and pathos

Businessman Oh Dae-su (Choi Min-sik) is inexplicably kidnapped and imprisoned in a grimed hotel room-like cell for 15 years. He doesn’t know about the captor and the reason for his incarceration. Later released, he learns about his wife’s murder and seeks for revenge. Meanwhile, he strikes up a romance with a young and attractive sushi chef, Mi-do (Kang Hye-jung). He eventually meets his tormentor, but their final encounter will yield yet more unimaginable horrors.

Oldboy is out now on 4K Digital Download, and will be released on DVD, 2-disc Blu-ray & Limited Edition 4-disc Blu-ray box set 0n 7th October. The 2-disc and 4-disc editions include the new feature-length documentary Old Days: An Oldboy Story. The 4-disc set completes Park Chan-wook’s Vengeance trilogy, including Sympathy for Mr. Vengeance and Lady Vengeance, both pack with extras including new features, commentaries and the fade-to-B&W version of Lady Vengeance.