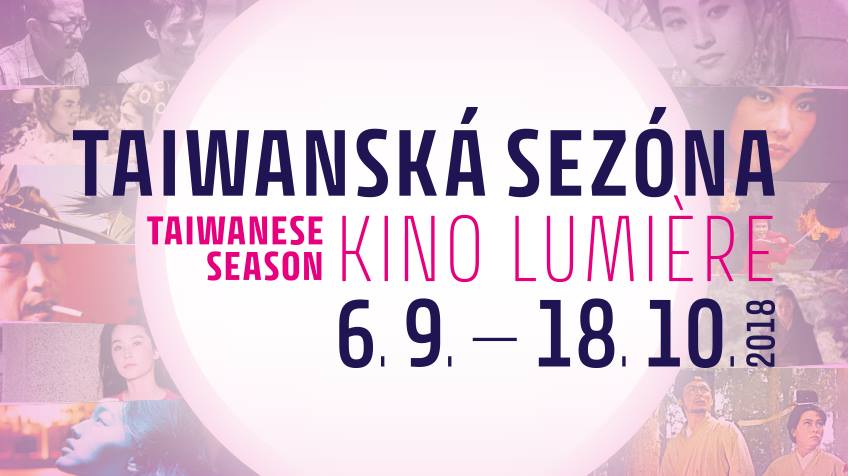 From Thursday 6 September 2018, the Kino Lumière will screen the first of the eleven films from the new programme Taiwanese Season, bringing Taiwanese films spanning from the 1960s to today to Bratislavan audiences. The screenings, each including introductions, will be scheduled for each Tuesdays and Thursdays at 6.15 pm, with the last film programmed for 18 October.

“Taiwanese cinema offers many works by recognized film-makers as well as artistically influential films, many of which are not known to Slovak audience,” says Kristína Aschenbrennerová from Slovak Film Institute, Curator of Taiwanese Season. “Our intention is to present Taiwanese films as a part of Taiwanese cultural identity as well as an integral part of the popular entertainment. That is also why the line-up of Taiwanese Season spreads over different decades and genres and lists art house films, social realist ʻblack filmsʻ and wuxia films alongside romantic films or socially critical films from the 1960s until today.” Jill Chen, Head of Department of International Promotion of Taiwan Film Institute adds, “the Programme includes seven Taiwanese classic films, as well as the important films from various decades, Taiwanese-language films, social-realistic („black“) films, adaptation of Chiung Yao novel, and martial arts films. They present an integral part of the Taiwanese film history, carry important historical memories and reflects on the popular culture of different ages.“

The Programme will open with fiction feature debut of the documentarian Huang Hsin-Yao The Great Buddha + (2017), “a black comedy, as well as a tribute of sorts to Hitchcock’s Rear Window,” as Aschenbrennerová introduces it. The stars of the film are a bronze statue of the Buddha, Pickle, the night watchman in the factory where it’s being made, and Belly Button, a rubbish collector and casual worker. Their miserable routine is interrupted when their TV starts acting up. They find a suitable replacement in dashboard camera recordings from the factory owner’s car, where you see what’s happening in front of the car, but hear what’s happening on the inside. “Earning prizes including five Golden Horse Awards and the Hong Kong Film Award for Best Chinese Language Film from the Two Coasts, the film is an adaptation of the director’s short film The Great Buddha, released concurrently with the iPhone 6+; hence the “plus” in its name.”

September line-up includes the oldest among the selected films The Fantasy of the Deer Warrior (1961) will introduce a story full of allusions to Aesop’s Fables that serve as an allegory of the tightening military regime as well as a witty commentary on human relations. Other of this month films, The Swordsman of All Swordsmen (1968), that is regarded as one of Taiwan’s most representative Chinese-language wuxia films owing to its exciting action choreography that blends the “Northern School” of Chinese martial arts with Japanese bushido, as well as the philosophical questions about life injected by the protagonist’s inner struggle between obsession and letting go. Loosely following the trend of gambler films of the early 1980s, Eighteen (1993) by Ho Ping reflects on local concerns employing fragmentary narrative where time and reality lose their boundaries, that according to Aschenbrennerová “somehow channels a bleaker, darker version of Wong Kar Wai’s concerned escapist style.”

The end of the month will bring a gripping and emotional adaptation of the same title of the novel by Chiung Yao Cloud of Romance (1977), accompanied by Millennium Mambo (2001) by the acclaimed director of Taiwan New Cinema Hou Hsiao-Hsien, whose The Assassin (2015) will screen in October.

Line-up and Schedule:
(All screenings start at 6.15 PM)

You can find out more and purchase tickets on the Kino Lumière website. You can also join the event on Facebook.