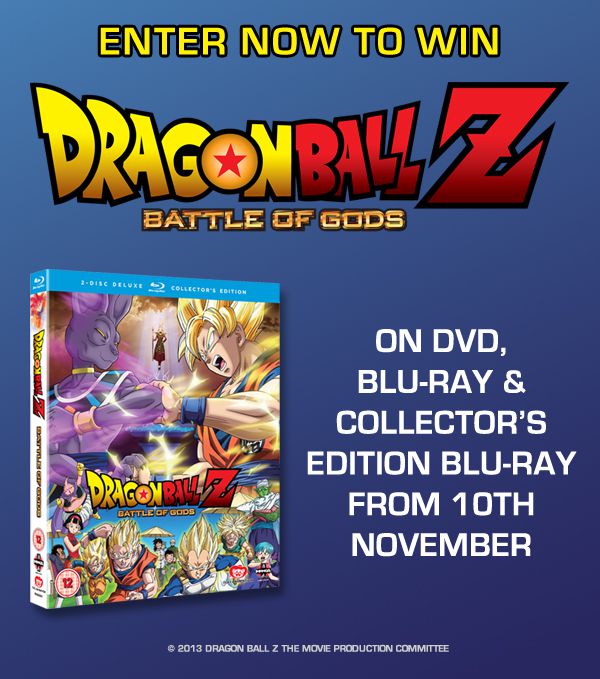 The hugely successful Dragon Ball Z comes to a feature-length UK release, and we have one Collector’s Blu-ray to giveaway!…

Following the events of the Dragon Ball Z television series, after the defeat of Majin Buu, a new power awakens and threatens humanity. Beerus, an ancient and powerful God of Destruction, searches for Goku after hearing rumours of the Saiyan warrior who defeated Frieza. Realizing the threat Beerus poses to their home planet, the Z-fighters must find a way to stop him before it’s too late. Only Goku, humanity’s last hope, can ascend to the level of a legendary Super Saiyan God and stop Beerus from destroying Earth, and possibly the entire universe!

Includes both the 85 minute Theatrical Cut and the 105 minute Director’s Cut.

To be in with a chance, all you need to do is fill in the form below, remembering to answer our ‘tricky’ question!

This competition has now closed.

Please note, only entries from the UK will be accepted for this competition. The competition closes midnight 18 November 2014, no entries after that time will be accepted. Prize winners will then be randomly picked and prizes only sent out after that date. Please fill out your full name and address clearly and correctly, including county and postcode, in the special form below (not comments section) or your entry will not be counted. Multiple entries will be disqualified. I mean it!

And don’t forget to try out our other competitions!

Thanks to Fetch Dynamic Ltd for the competition prize.