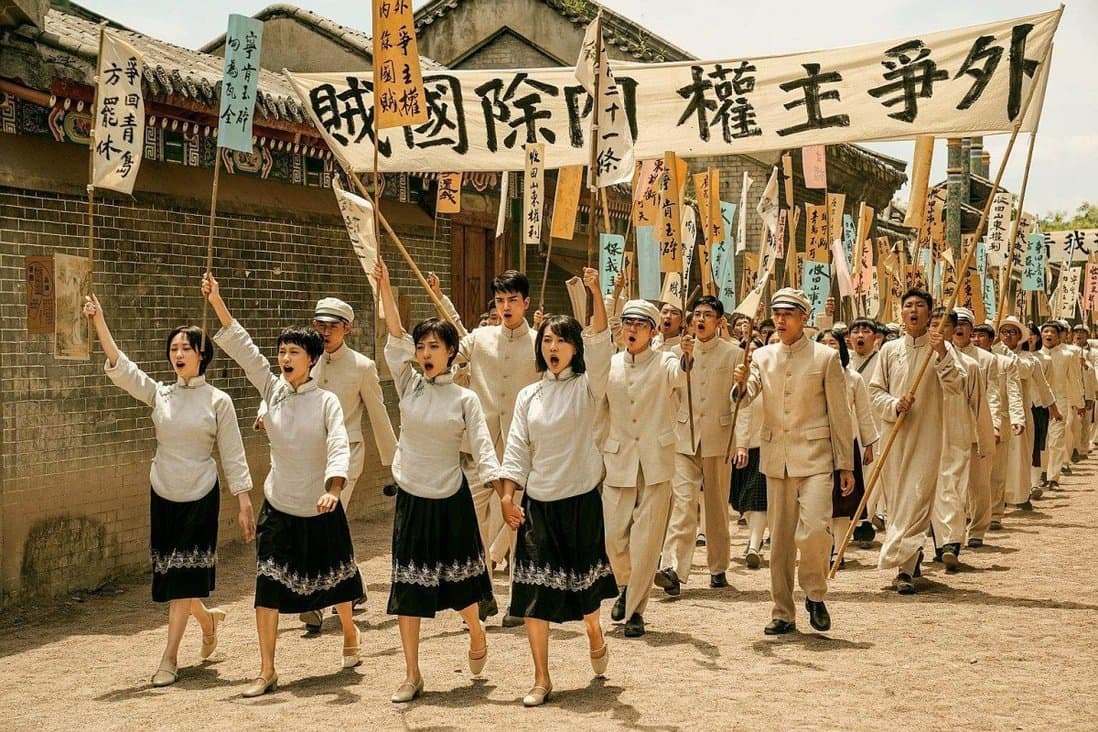 The Chinese Communist Party marks its 100th anniversary with 1921, a celebratory ode to its founding, singing the praises of the ideology and value system which has come to shape modern China. Appropriately, the film was co-directed by Huang Jianxin, who ten years ago also helmed the CCP cameo-fest Beginning of the Great Revival, as well as producing patriotic pics like My People, My Country and others, aided behind the camera by Zheng Dasheng, mostly known for his TV work. This time around, the film features a much younger cast, depicting the early lives of key communist figures as they struggle to establish the party during a tumultuous time.

Set against the backdrop of a China oppressed by foreign powers, the film follows a number of different characters, the most familiar to western audiences being a young Mao Zedong (Wang Renjun), who at this stage of his life has yet to seize his destiny, and is working as a laundryman. At the same time, Li Da (Huang Xuan) runs a small communist school in Shanghai, building a movement based on the teachings of Mao and Chen Duxiu (Chen Kun), who spends most of his time in jail as a political prisoner. With socialism and Marxism on the rise in other parts of the world, the three plan to form a new communist party in order to bring equality to China, though attract the attention of the authorities, who attempt to suppress its growth.

As a piece of propaganda cinema, 1921 is essentially review-proof, being a film that preaches almost exclusively to the choir. There’s nothing wrong with this as such, with pretty much every country in the world producing propaganda films of one degree or another, Hollywood in particular, from nationalistic biopics to glossy displays of military strength and unconvincing global benevolence. What’s interesting about Chinese propaganda cinema of the last decade or so is the relationship between entertainment, education and ideological reinforcement in films, and in that respect there’s a fascinating comparison to be made between Huang Jianxin’s Beginning of the Great Revival and 1921, made ten years apart. Certainly, the Chinese Communist Party and its domestic and international processes and policies have changed during this time, and that’s something that can perhaps be seen in the different approaches of the two films, with Great Revival being a much drier, more stoic affair, and with 1921 bringing in a glamorous cast and making a stab at working in genre elements alongside its teachings, playing to a younger audience and party demographic.

Unfortunately, for the average viewer unversed in modern Chinese history or the history of the CCP, 1921 is an incredibly dense, at times unfathomable affair which makes almost no attempt to provide context or information on its events or characters, making it tough going for most of its overstuffed running time. While key figures are introduced by onscreen text, the script never develops any of its characters beyond sketchy details about their inherent decency, leaving the audience to fill in the blanks themselves, something which robs it of any real drama or emotional impact, Huang and Zheng relying on flag waving to hold the interest – as with Great Revival, the film also features a confusing flood of bit parts and supporting players, most of whom don’t really add anything to the story. While this possibly works fine for the target demographic, it’s a decision which proudly marks the film as only being for the already informed, and for a propaganda production there’s an odd lack of what could be called educational or persuasive elements, making it curiously dispassionate and rather empty – although the film packs in lots of long chats about communism and the fledging CCP, these basically serve only to extoll their virtues, and there’s not really much to engage the curious.

At the same time, the film’s more genre-friendly aspects fall flat, and though Huang and Zheng do throw in a few action set pieces and dashes of espionage, these are randomly sandwiched between all the drawn-out dialogue scenes, and there’s no sense of danger or drama. In this respect, the film recalls, though compares very unfavourably to Zhang Yimou’s recent Cliff Walkers, in particular a familiar-looking car chase, and never manages to use the political intrigue of its period to generate the same kind of excitement. The idea of using the founding of the CCP as the basis for activist spy games certainly isn’t a bad one, though again the lack of character development never gives the film any kind of base to build the necessary tension. Similarly, though it’s clear that a fair amount of effort went into the production design and into recreating the sets, Huang and Zheng never seem comfortable whenever the film lurches away from quiet, dry dialogue sequences, and they fail to provide the sense of spectacle which might have at least given it the air of a historical epic.

Of course, all of these criticisms might well be less important for followers of the Chinese Communist Party approaching it as a celebration, and the film’s lack of explanations and details may prove only a minor issue for scholars of the period – however, for casual audiences and those not overly-enthused by the idea of sitting through lengthy tracts of one-sided dialogue, there’s really nothing about 1921 which makes it worth watching. This is a shame, as while a more focused, and indeed more balanced exploration of the foundation of the CCP would make for a fascinating film, Huang Jianxin and Zheng Dasheng miss the mark entirely, and 1921 lacks any insight, drama or entertainment value.