Cold war espionage thriller meets wuxia, in a stylish example of the genre…

The idea of fusing the worlds of spy espionage and wuxia was hardly novel. Protagonists in martial art novels and stories often hiding great power behind jovial appearances, their loyalties opaque, and liable to turn on a sixpence anyway. It was a match waiting to happen. But when King Hu unmistakably made those references on Dragon Inn, his follow up to Come Drink With Me, become a phenomenal success throughout Southeast Asia. One that should have turned to profit for the production company he co-founded, Union Film, had he not agreed on distribution rights across much of Asia with Shaw Brothers as a trade for breaking his contract with them. A double-edged sword, as perhaps without their backing, it probably wouldn’t have reached as far in the first place.

Union Film seemed keen to carve out a name as for itself as a new home for wuxia genre in Taiwan to rival Hong Kong’s Shaw Brothers (as well as making some romantic dramas). That included Joseph Kuo’s solid 1968 offering The Swordsman of All Swordsmen, so when Hu’s assistant director Tu Chun-Hsun came to helm his first film, it was hardly surprising he kept to the much the same formula. It not only borrows part of the title with its name – the popular English rather Marlowe-esque title A City Called Dragon being less representative than the alternative Ten Days in Dragon City (closer to a literal translation). It also has several Hu regulars including Hsu Feng and Shih Chun (both also in A Touch Of Zen, Raining in the Mountain and Legend of the Mountain). There’s also a suspiciously high number of co-stars from Zen – as if Tu, who also acted as assistant director on that film, and company took a sabbatical for a few weeks to make another film in the meantime. (A Touch Of Zen began filming in 1968, but was still in production when the first part was released in Taiwan in 1970.)

But if that sounds like it should put you off, don’t let it…

Co-writing the screenplay with Hu Han, Tu (billed on screen as Larry C. H. Tu) literally expands the claustrophobic confines of the inn to a whole city. Here we find Shang Yen-Chih, the Jade Dragonfly (Hsu Feng), rushing to Jin held stronghold Dragon City to aid fellow Song resistance member Chen Yang-Xin, only to find him and his whole household executed by Commander Bu Lung (Shih Chun). The race is on to track down important resistance plans in Chen’s possession, but can it be found when no one is to be trusted, and someone seems to be one step ahead of her search every time.

The key to A City Called Dragon is it takes the espionage thriller concept of Dragon Inn and dials it up. A tense shadowing on a street is played out with street traders, their cries and rattles giving away their distance from our protagonist. The use of sound throughout is impressive, with seemingly innocuous sounds made repetitive and haunting. When her motives are exposed to the governing forces, she is caught and tortured to give up her secrets. (Those familiar with her roles elsewhere in King Hu films will guess how successful her aggressors are.) 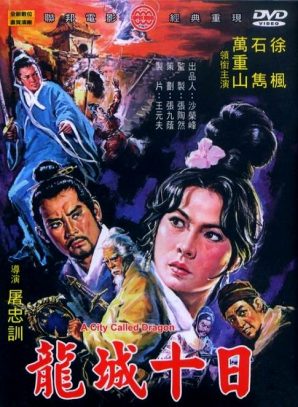 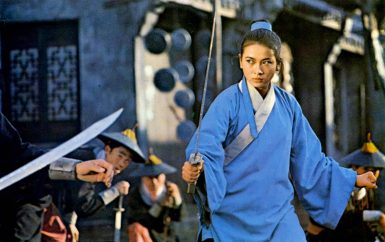 Tu and his cinematographer Chou Yeh-Hsing use the widescreen ratio to full effect, rarely are characters framed without something placed prominently in the forefront (often another person), or caught through gaps in shelves or windows, like we are watching on like spies ourselves, effectively adding tension throughout. The main reference point here seems to be Sidney J. Furie’s The Ipcress File, and in particular the work of Czech cinematographer Otto Heller, who as well as the Harry Palmer sequels Funeral in Berlin and Billion Dollar Brain worked on other iconic British films like Peeping Tom and The Ladykillers. Visually the film stands alongside Hu’s work, less ambitious in scale but equally considered (if not more so) in composition.

The Ipcress File and other espionage thrillers such as Hitchcock’s Torn Curtain colour the plot here as well. Much is left offscreen, relayed to our hero later on, leaving us as in the dark as she is. Here the film benefits greatly from reduced players and simpler narrative, more akin to Hu’s Come Drink With Me than his own redux of Dragon Inn, The Fate Of Lee Khan. Hsu shines as a result and it’s great to see her in a role where she really doesn’t have to share the limelight with anyone. Regular co-star Shih Chun also relishes his role as the evil Commander, here also credited as assistant director. Chen Hui-Lou (Execution in Autumn, Marco Polo) has enormous fun as the white-haired real villain of the piece Wo Li. Maniacally laughing his way through everything adversaries have to throw at him as he rattles his distinctive ringed weapons (definitely an influence from the quirkier weapons that were beginning to appear in Shaw Brothers films).

What’s interesting is how this foreshadows Hu’s later work. The character of Chiang Ta (Wan Chung-Shan, A Touch Of Zen, Village of Tigers), an innocent locksmith who comes to Shang’s aid despite the danger, echoing Shih Chun in A Touch Of Zen. And if the sight of Hsu rifling through the Chen estate brings to mind Raining In The Mountain, then the ghostly appearance of the family butler literally gliding into view surely foretells Legend Of The Mountain. It’s more playful and imaginative with the genre than the shorthand directors like Chang Cheh were beginning to implement back at Shaw Brothers, where films were becoming more male-led.

Tu uses the same physical and in-camera effects as King Hu, with shots in reverse and out-of-sight trampolines. There’s a lot of roof hopping, and though the action might not be as well-orchestrated as that seen in Hu films, it still leads to as thrilling a finale as you could want. There’s even a throwaway (geddit?) reference to Goldfinger’s OddJob.

The result is a fun wuxia film that still feels inventive, and ultimately perhaps more cohesive than many of the contemporary examples that were coming out of Hong Kong’s Shaw Brothers. Recently restored by the Taiwan Film Institute, A City Called Dragon is one unsung classic that deserves more attention.

A City Called Dragon is available online for free from 18 to 27 September from the Taiwan Film Festival Edinburgh.