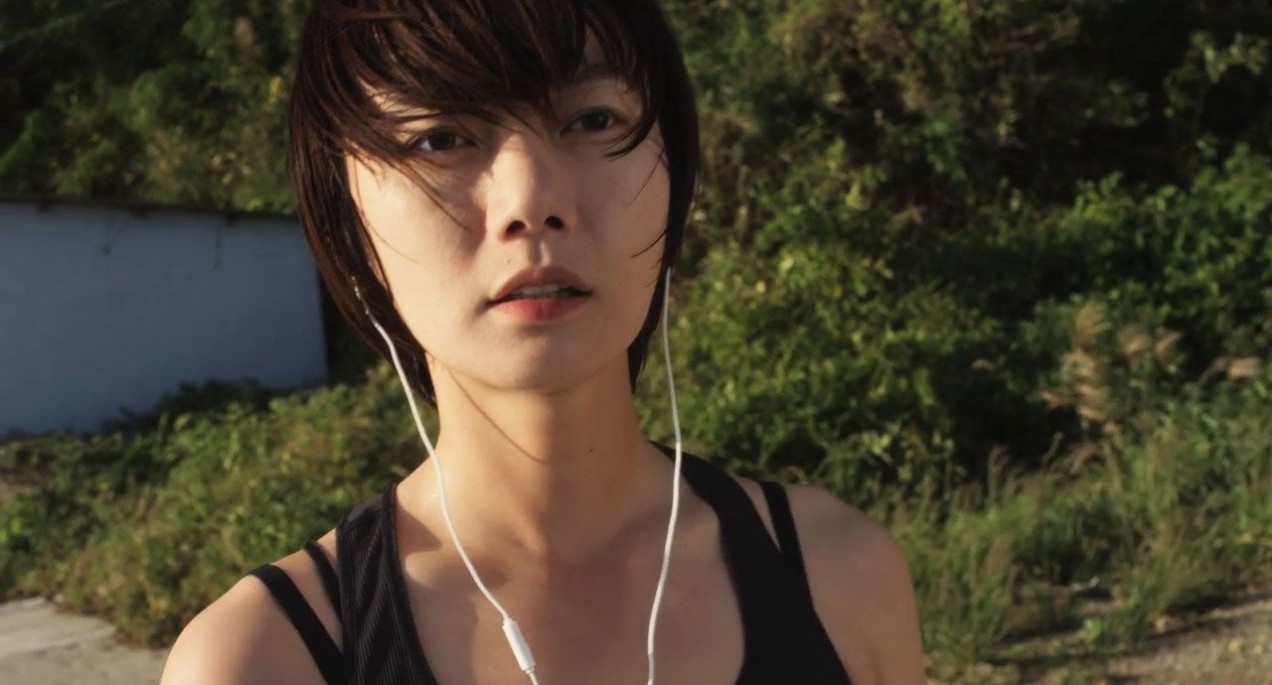 Alcoholism, abuse and outsiders in one of the best Korean films of 2014…

This film was previously reviewed on easternKicks by Andrew Heskins.

Writer director July Jung makes a stunning debut with drama A Girl At My Door, starring acclaimed Korean actress Bae Doo-na (Cloud Atlas) as a police officer who forms an uneasy relationship with a young girl in a remote rural area whose inhabitants all seem to have an alcohol problem. Like most outings from Lee Chang-dong, who served as producer, the film proved very popular with critics at international festivals, including Cannes, where it played in the Un Certain Regard section and where it reportedly received a three minute standing ovation from the audience.

Bae Doo Na plays Young Nam, a police officer who as the film begins has been transferred from Seoul to a remote rural fishing village to head up the local station. Things initially seem quiet, with most of the young people having deserted the area, mainly leaving behind elderly residents who spend most of their time drinking. However, Young Nam is shocked when she meets 14-year-old Do Hee (Kim Sae-ron, The Man from Nowhere) and finds out that she’s being abused by her stepfather (Song Sae-byuk, The Servant), a brutish man who runs a crew of illegal immigrants. Young Nam tries to help by taking the unfortunate girl in, though rumours start to spread about the nature of their relationship, and the truth about why she was forced to leave the big city surfaces.

Dealing with themes of alcoholism, abuse and homosexuality, subjects not often covered in mainstream Korean cinema,  A Girl At My Door was a risky proposition, and indeed the film was funded largely by the Korean Film Council, with its main stars apparently appearing without being paid. Despite its content, the film is surprisingly subtle, and what July Jung has crafted here is a truly rich and rewarding, if harrowing experience, which subtly gets to grips with some of the darker aspects of Korean culture and the clash between modernity and out-dated tradition. Taking the town as a microcosm for the country as a whole, Jung offers a powerful piece of societal criticism, depicting bigotry, misogyny and corruption, the locals distrusting outsiders and their ways, and with violence still ruling. Also touching on politics and the plight of illegal immigrants, Jung impresses through managing to cover a great deal of ground, though without ever preaching or letting A Girl at my Door become an obvious or overt ‘issues film’ – it’s really quite amazing to see a first time helmer of just 34 showing such maturity and focus.

Where the film also scores very highly is in the way that Jung combines these concerns with drama and Hitchcockian suspense, ensuring that it works on several different levels. The gradual revelation of Young Nam’s reasons for leaving Seoul and the truth about Do Hee’s situation both make for gripping and tense viewing, as does the unfolding power struggle between the two and her violent stepfather. Restrained and quiet through until its memorable conclusion, there’s a pleasing lack of melodrama, and is free from the kind of last act plunge into tears and hysteria that often taints Korean films of its type. Jung similarly shows a very steady hand when it comes to the visuals, and though on the lower budget end of the scale, the film looks great and manages to generate an ever-present atmosphere of unease and growing threat – while the idea of ugliness lurking beneath a pleasant rural façade is nothing new, it’s put to particularly good effect here.

Jung proves as talented a writer as director, and the film benefits hugely from a substantial and nuanced script, which successfully fleshes out the characters and drives the plot without spoon feeding viewers answers in the usual fashion. Both Young Nam and Do Hee are fascinating figures, and the shifting, ambiguous relationship between the two wounded souls is emotionally tense and rewarding. Bae Doo-na is excellent in the lead, and does a fantastic job of conveying her character often without words, gradually revealing her trauma and secrets through body language and the look in her eyes. Kim Sae-ron is also on top form in the difficult, semi-femme fatale role of Do Hee, and adds the necessary believability to the character, mixing vulnerability and manipulative techniques of an older and more sexualised woman – Kim was certainly well deserving of her Best New Actress win at the Blue Dragon Awards.

A Girl At My Door is a challenging, absorbing film, and one of the very best offerings not only from Korea, but anywhere in the world in 2014. Boosted by first-class performances from its female leads, the film marks an incredibly accomplished first outing for July Jung, and clearly highlights her as a director well worth keeping an eye on in the future.

A Girl At My Door is released on UK DVD on 11 January 2016 by Peccadillo Pictures.

One thought on “A Girl At My Door”