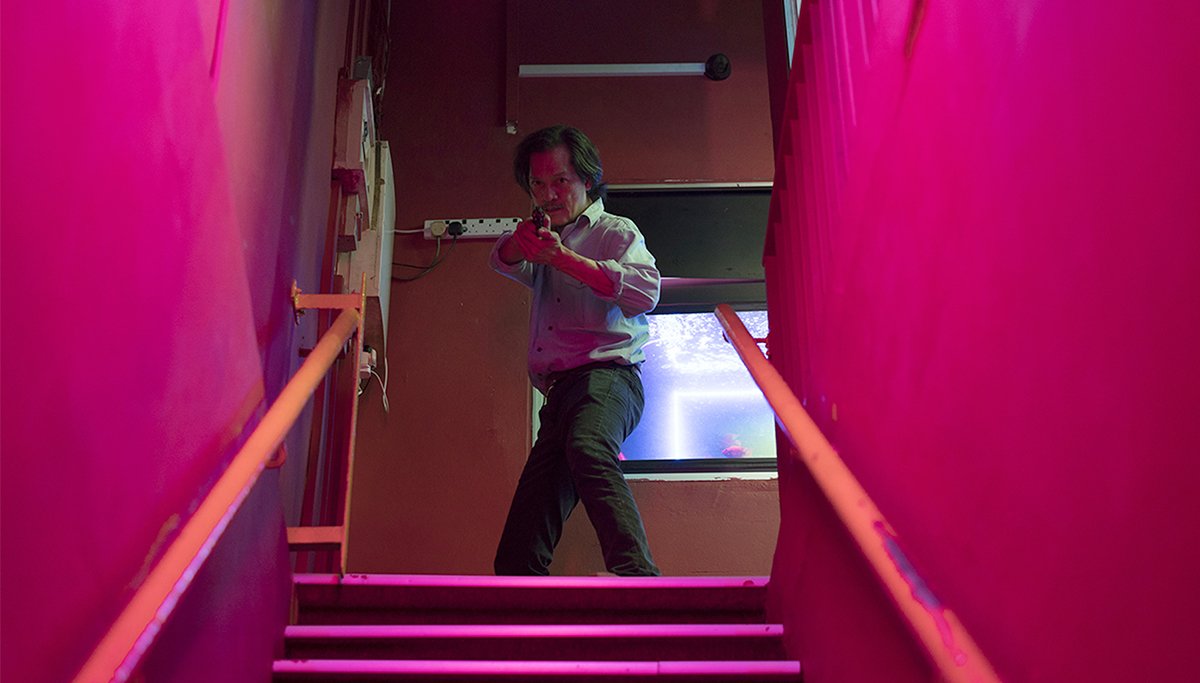 Total immersion, fish tanks and the mystery of what Singapore is made of…

This year’s winner of Golden Leopard in Locarno uses Lynchian nightmarish noir style to tell a tale about the disappearance of a Mainland Chinese migrant worker in Singapore. From the first seconds the film amazes with visuals and enigmatic atmosphere but do not be mistaken, there is much more to A Land Imagined than style and complicated non-linear storyline.

A Land Imagined unfolds around two main narration lines. The first one follows detective Lok, who is assigned to investigate the case of Wang Bicheng – construction worker employed at a land reclamation site where he suffered an accident while supervising gigantic machines that grind imported stones into sand used for expanding Singapore’s area and modify its coastline. Detective Lok’s character remains undeveloped, he serves more as a vessel to transport the audience into the second narration line, focusing on Wang Bicheng himself, telling the story after the accident from his perspective. The boss is not willing to pay for construction worker’s plane tickets back home after the injury, so he does not lay off Wang Bicheng, but until the recovery from a broken hand, the main character is given work as the construction company’s truck driver, running errands. Unpopular among his Chinese roommates, he makes friends with Ajit – Bangladeshi worker, whom he meets while driving the company’s truck. Although the work is easier, it is also less paid, thus growing anxiousness comes over Wang Bicheng and he starts suffering from insomnia. To kill the time during long sleepless nights, he goes to the internet cafe close by his dorm to play shooting games online. There he meets Mindy, tough and cynical young woman who is supervising the internet cafe, but is utterly bored with the work. The vague romance gives way to the feeling of entrapment and paranoia as Wang Bicheng starts to uncover the truth about the fate of some fellow construction workers at his company.

There seems to be no other film so deeply rooted in Singapore’s history and contemporaneity – a city built on a swamp, dream project of two men – sir Stamford Raffles and president Lee Kwan Yew. The first founded the city and begun its carefully calculated development as one of the British colonies, while the second coordinated Singapore’s modernization after the independence, aiming to turn it into a self-sustainable global city. Nearly renaissance, utopic designs still persist today, as the government continues to mould Singapore into a garden city and Venice of the XXIst century. A Land Imagined reminded me that few hundred years ago there was a similar tale of Saint Petersburg – a marvelous city on water, a dream project of Peter the Great in his pursuit of Enlightened Absolutism. Saint Petersburg was also built on a swamp and a legend says that during the city development thousands of workers died, consumed by the floods or the wetlands, thus it was infamously nicknamed the “city built on bones”. It sounds too exaggerated and dramatic for modern times, but these two situations do have something in common with the scene when the worker’s corpse is visible half buried in the sand at the beach.

In the dialogue with a mysterious online friend, Wang Bicheng also admits that he feels gradually consumed by some strange force, maybe by pointless waiting to escape from the workplace he seems to be stuck in permanently due to limited economic mobility. Mindy shares a similar fate, she sometimes persuades Wang Bicheng to drive for a night out at the beach made of the sand imported from Malaysia, Indonesia, Cambodia and other Southeast Asian countries. Their dialogue becomes an ultimate definition of Singapore – the city made of Little India, Chinatown, Bugis (Muslim district) and many other small universes, the city which area expands and develops using not only foreign soil but also the labour of workers from neighbouring, less prosperous countries. This is truly A Land Imagined.

Yeo Siew Hua as a director and writer uses the instantly recognizable film noir style and applies it into a local Singaporean context, creating a subtle, metaphoric image that accurately grasps the experience of living in this fast-changing city, which is full of contradictions, because for some Singapore can be a global, interconnected city of multicultural foreign talents but for some a prison or purgatory that they cannot escape from. It all depends on how much capital (financial, educational, social) one has, but there is one thing in common, which is the constant feeling of precariousness and the impression of living inside the artificially constructed environment, comparable to the fish tank that in A Land Imagined dominates the scenes shot in the internet cafe.

A Land Imagined is Yeo Siew Hua’s second fiction feature, but the filmmaker is already presenting a coherent vision, great creator’s discipline but also sensibility. The actors could not be chosen better, Liu Xiaoyi with his background in experimental theatre is able to express Wang Bicheng’s anxiety,  feverish confusion mixed with exhaustion. Peter Yu fits perfectly into the character of a confused, driven but very peculiar detective Lok. Peter Yu’s characteristic quality seems to be completed by his own life story – Singaporean TV actor massively popular in the 1990s, in 2008 went through a harsh divorce, depression, gambling debts, started working as a cab driver and slowly started to rebuilt his family life and career. Finally, Guo Yue’s performance as Mindy is combining contradictory features of the character: cynicism of a femme fatale figure with the dreamy spontaneity of a young woman. Guo Yue, originating from independent Chinese cinema, has a similar kind of charisma as Zhou Xun, especially in another noir film made almost 20 years ago, Suzhou River (2000, dir. Lou Ye).

A Land Imagined visual style is distinct, Yeo Siew Hua shows a construction site using realistic measure, but then internet cafe and outdoor night scenes fall into the realm of science fiction dreams, made under the fluorescent skies above Jurong Island, an artificial land reclaimed from the sea where now the petrochemical industry thrives. Or A Land Imagined can be like a poem written at night inside the online shooting game, which consumes the player’s spirit never to wake up from the glitched screensaver.

The total immersion is completed with film soundtrack composed by Teo Wei Yong and the additional complication score that accents several scenes in A Land Imagined. Malaysian Chinese Lee Yee’s 1970s old love song accompanies the noir romance between Mindy and Wang Bicheng. Then the music by Singaporean band .gif plays in the ending scene of the film, leaving the electrifying feeling as the credits roll. While being part of Singapore’s precariat, there are times when characters just dance, outside the Bangladeshi workers dorm or on the beach, it could also be in an old empty house in Geylang district or in many other places Singapore, because there seems to be something hidden underneath the sleepy HDB estates, just like in many other David Lynch films.

A Land Imagined does not give answers, only multiplies questions. For some viewers, it might be frustrating, but sometimes we can forget about the importance of solving the mystery and knowing the truth, just let ourselves be confused, charmed, disturbed, mix our understanding and experience with the story on screen. It is all fiction and all real at the same time anyway.

A Land Imagined was screened at the 2018 Locarno Film Festival.