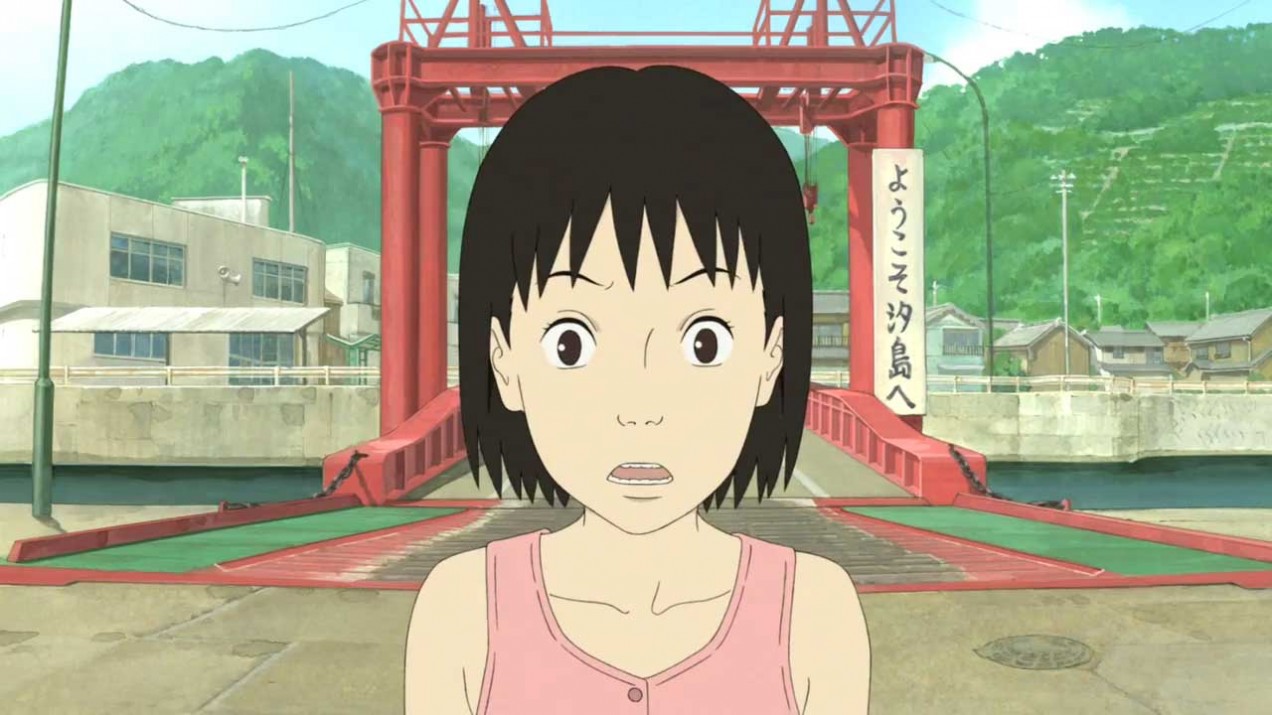 Quite simply on a par with Spirited Away as a magical kids film everyone can enjoy!…

13-year-old Momo (Karen Miyama) and her mother Ikuko leave behind their life in Tokyo after the recent death of her father for the remote island Shio. She deeply regrets an argument she had with him shortly before his death, having never got a chance to apologise, and tries to work out what her father meant to say in an unfinished letter he left her that just bears the words ‘Dear Momo’.

Adjusting to life on the island can be tough for the shy Momo, especially as the town doesn’t even have (shock horror) a ‘real’ convenience store! But when she begins to hear noises upstairs in a storeroom at her mother’s childhood home, which they share with her uncle and aunt, things take a turn for the weird.

The storeroom seems to be haunted by ghostly apparitions that take shape as three yokai (goblins): the grinning giant Iwa, the amphibian looking Kawa and the baby-like Mame. The unruly yokai quickly cause all sorts of trouble around the neighbourhood – but their appearance so soon after her father’s death turns out to be more than coincidence…

With over three decades in animation, director Hiroyuki Okiura is best known for shooting Mamoru Oshii’s (Ghost In The Shell, The Sky Crawlers) script on Jin-Roh: The Wolf Brigade. Easily near the top of my ‘must-see anime’ list, alongside films like Satoshi Kon’s Perfect Blue, it’s intelligent take on sci fi themes may have been down to Oshii, completing his Kerberos Saga trilogy, but the way it was filmed was far more, well, cinematic.

Yes, cinematic. It sounds like an odd way to describe an animated moving image, but Okiura’s understanding of film is far closer to live action than animation. His knowledge and appreciation for cinema was immediately obvious. I felt as though it was Oshii’s sci fi as seen through the lens of Alfred Hitchcock in Vertigo or Suspicion mode. But if Jin-roh is Hitchcock, then Momo borrows from another master, it’s children’s fantasy as though made by Yasujirō Ozu. (It even shares his low perspectives.)

A Letter To Momo is Okiura’s first directorial effort since Jin-Roh, and by all accounts much of that time has been developing this film, writing and storyboarding it, allegedly some seven years. That personal involvement shows in the painstaking work taken to bring this to the screen. It’s beautifully and painstakingly rendered with lovingly detailed backgrounds that truly bring the village to life.

But it doesn’t just look good; the writing of the characters makes them just as seem just as real. From the neighbourhood kids to the local postman, all are given a depth helped along by fantastic performances from the voice actors. The rascally Iwa is played by Toshiyuki Nishida, best known in Japan for his comedy fishing series 釣りバカ日誌 (leading to an in joke about his not liking fish) and by Western audiences as the original Pigsy in Monkey – not that we heard him then.

15-year-old Karen Miyama is particularly convincing, as the lead, perhaps because of her similarity in age. Momo’s efforts to fit in to her new surroundings and neighbourhood kids will immediately strike a chord with those of us who experienced moving to a new school or area at some point during our youth. By never playing down to the younger members of the audience the film is just as enjoyable for adults (if not more so).

Okiura is a master of pace and timing, never feeling the need to rush his characters reactions and their situations, but making the impact, whether humour, suspense or tension, all the more powerful for it. Throughout, even with an wonderfully evocative soundtrack by Mina Kubota, Okiura’s reins in the sentimentality till the very end, rather than playing it up.

Mark Schilling’s review in The Japan Times makes a good point: the island is far more tangible than the sort of glossy nostalgia we’d find in a Studio Ghibli small village or town. That grounding influence even spreads to the mythical creatures, making them seem just that little bit more feasible, despite it all. The fact that this film, like much of studio Production I.G.’s output, uses a lot of CGI, yet is completely unnoticeable on this film (unlike several recent Ghibi efforts) says it all really.

It’s difficult not to make comparisons to Studio Ghibli. Animation supervisor Masashi Ando worked on Spirited Away, and art director Hiroshi Ono worked on Kiki’s Delivery Service. It didn’t help that this played as part of a deliberately varied weekend from the BFI’s biannual Anime strand (read: heavy on the family friendly films, light on the robots, moe, shotacon, etc) which included a preview of the latest from Ghibli, From Up On Poppy Hill.

Thematically there’s much in common with previous Ghibli works, indeed the story of a young girl coming across strange, magical creatures, particularly with the absence of a parent, will instantly bring My Neighbor Totoro to mind. Though those characters were far less mischievous, and this, like Spirited Away, is really aimed at older children. Even Poppy shared a young girl trying to come to terms with the tragic death or her father. (These are, of course, pretty generic themes in terms of children’s movies; let’s just start with E.T. and move on from there shall we?)

And yet the comparison with Poppy underlines the films worth. Poppy is a solid, well-made, enjoyable film – but it sure doesn’t have the magic of Princess Mononoke or Spirited Away. Momo, quite simply, does – it’s an absolute delight!

It’s no surprise that this has won over audiences at festivals it’s played at. It was awarded Platinum Grand Prize at the Future Film Festival in Italy earlier this spring and won the grand prize at the New York International Children’s Film Festival (NYICFF)*.

A Letter To Momo screens as part of the part of the Japan Foundation Touring Film Programme 2015 – ‘It Only Happens in the Movies?’ at the ICA London and various venues around the UK, and is due for release by All The Anime.

*Update 22/12/2014: UK distributor All The Anime acquired the film mid 2013, yet are still to officially release the film beyond screenings at festivals and events. It was released in the US on DVD and Blu-ray on 21 October 2014 by GKids.