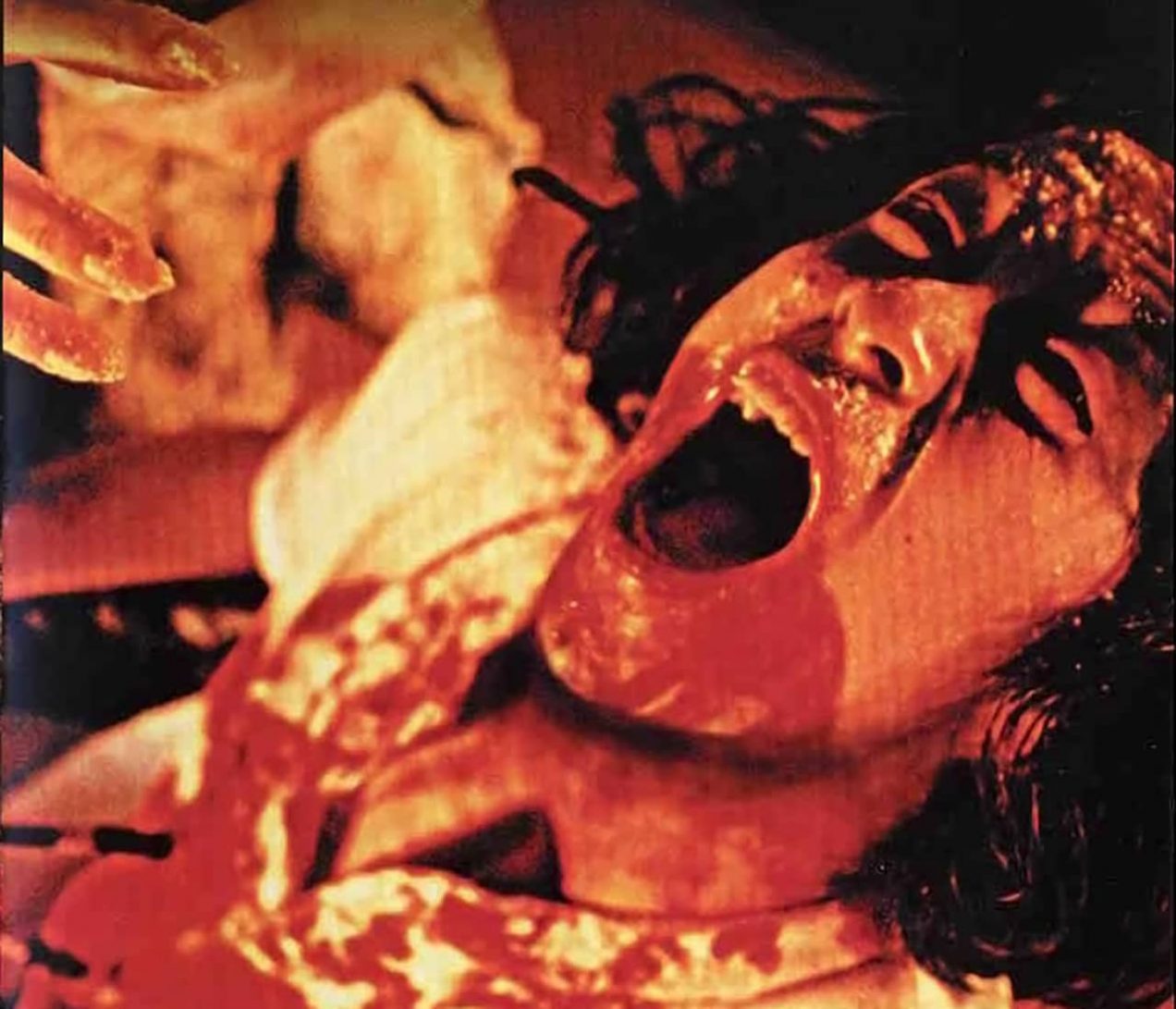 Although A Living Hell came out in Japan during the Asian horror boom of the early 2000s, the film took a while to start gathering word of mouth as a cult item, with comparisons being made with other eastern films such as Audition and western films like The Texas Chainsaw Massacre – in fact, the Saiko DVD release helpfully carries the tagline, “The Japanese Chainsaw Massacre”. The film has gained a reputation for being terrifying and sadistic, with some even likening it to the infamous Guinea Pig series, something which most of its promo art plays overtly, with gory images and lurid hints of unspeakably bloody torture.

Given this, I was quite surprised to find a different film awaiting me, with A Living Hell being more of a black comedy and an unhinged exploration of inherited evil than an all-out splatterfest. The plot begins with deceptive simplicity: Yasu (Hirohito Honda from Battle Royale) is wheelchair-bound and living with his brother, sister and often-absent father; into their lives comes an old woman called Chiyo (Yoshiko Shiraishi) and a young girl, distant relatives needing a place to stay after the last family they lived with mysteriously died. Right from the start, it’s obvious that there is something strange about the new arrivals, but Yasu’s family dismisses this as eccentricity and senility. However, as soon as they are alone in the house, the two inflict a series of tortures on Yasu that escalate from humiliation to assaults with pliers, a stun gun, and worse. Unfortunately, his family refuses to believe that anything untoward is happening, suggesting instead that he may be going a little crazy himself. Meanwhile, a local journalist investigates the sinister past of the old woman, rapidly learning that things are more complicated and twisted than they seem.

The biggest asset of A Living Hell is undoubtedly Shugo Fujii’s direction, which is far more accomplished than that in the vast majority of other shockers. A first-time auteur, Fujii also wrote and acts in the film, using a number of clever camera tricks and off-kilter angles to create an effectively unsettling atmosphere. Although the film is obviously quite low budget, Fujii directs with assurance and style, and the feeling of menace that pervades the first two-thirds of the film is built up gradually but persistently, with the viewer’s discomfort growing as the tortures intensify. Most of the violence is offscreen, or is sadistic without being bloody, and the film is all the more effective for not simply relying on gore, something which would have given it far less impact. Unfortunately, this may leave gorehounds feeling short-changed, and although there is some blood towards the end, the film is quite subdued in this department, working on the mind and nerves as much as the stomach – on reflection, since the gore effects that are shown are not of a very high standard, keeping the splatter limited was probably a good idea.

The third act of A Living Hell brings a wild shift in tone, including several bizarre plot twists. Without spoiling anything, it is at this point that the Texas Chainsaw Massacre comparisons become apparent, as the film hurtles into a hyperactive freefall of gibbering insanity. This may cause some viewers to lose interest, as dementia that follows is quite at odds with the rest of the film. I myself enjoyed these scenes immensely; even though some of the plot twists were a little ridiculous, they were nevertheless thrown into the mix with a great deal of enthusiasm, giving it a welcome shot in the arm and helping to really differentiate it from the other Ringu-style vengeful long-haired ghost stories so popular at the time.

It has to be said that A Living Hell is not all good. The acting, in particular, is pretty poor, especially Hirohito Honda, whose constant look of wide-eyed, open-mouthed shock quickly becomes ridiculous. Similarly, as the film gets increasingly deranged, the other performances derail somewhat, degenerating into eye rolling and shrieking, though I found this to be quite entertaining. On a more positive note, Yoshiko Shiraishi is terrifying as the old woman, tormenting Yasu with an awful blank look on her face.

Despite these flaws and some creaky production values, it’s hard not to be impressed with A Living Hell. Far from being the all-out atrocity that the promo art leads viewers to expect, it’s actually a subdued, creepy exploration of human cruelty. Until the last half hour, that is, after which all bets are off and your enjoyment probably rests on your tolerance for screaming and over-the-top wackiness.