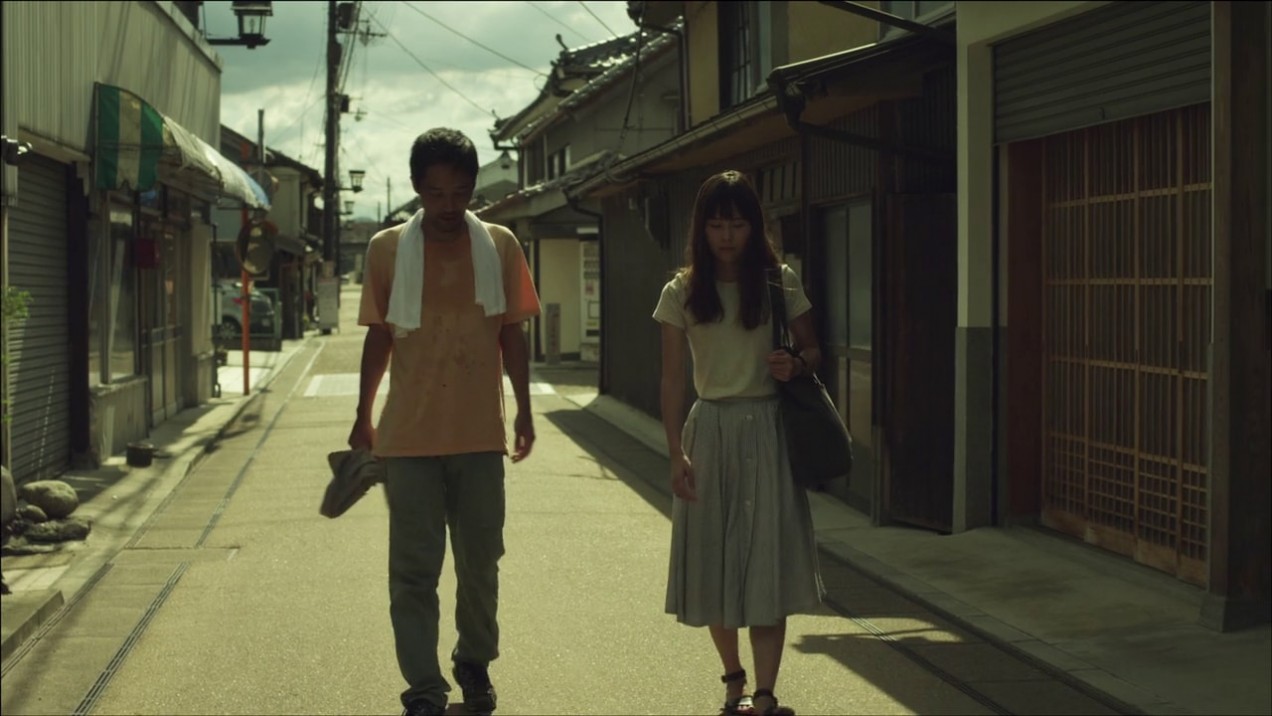 Korean writer director Jang Kun-jae follows up his much-praised 2013 Sleepless Night with A Midsummer’s Fantasia, a film split into parts following the experiences of a film director and his assistant in rural Japan. Reuniting Kim Sae-byuk and Lim Hyung-kook, who worked together on Kim Kyung-mook’s 2012 Stateless Things, the film also stars Iwase Ryo (Yellow Kid), and was produced by acclaimed director Naomi Kawase (Still the Water), whose Nara International Film Festival provided support. Having played to positive reviews at festivals around the world, the film emerged as one of the year’s biggest indie hits back in Korea, confirming Jang as one of the country’s most interesting rising talents.

The film consists of two chapters, opening with First Love, Yoshiko, in which a Korean director (Lim Hyung-kook) travels to Gojo in rural Japan as part of a location-scouting trip for his next production. Joined by his assistant director and translator Mi Jung (Kim Sae-byuk), the two travel around the area and interview several of the locals, becoming very interested in particular by the stories of an elderly woman and a civil servant who has returned from the city to live there (Iwase Ryo). The second part, Well of Sakura, depicts a romance inspired by a tale told during the previous chapter, with Mi Jung this time being a Korean actress visiting Gojo and falling in with a local persimmon farmer (Iwase again). Gradually warming to each other’s company, the pair wander the town, growing closer as they share experiences and memories.

There’s undeniably an air of familiarity to A Midsummer’s Fantasia, with its two part structure, overlapping stories, shifting characters and often rambling scenes of dialogue recalling the works of Hong Sang-soo and Richard Linklater’s Sunrise trilogy. The influence of producer Kawase can also be seen during the opening segment, shot in black and white documentary style, and with the film as a whole showing the same kind of tranquil eye for detail when it comes to capturing nature and rural scenery. The plot itself, both in terms of its understated romance and its Korean-Japanese cultural communication is similarly nothing new, with the presence of a film director, assistant director and an actress as protagonists being common in indie cinema.

Thankfully, A Midsummer’s Fantasia is a very strong indie in all other respects, Jang Kun-jae showing himself to have matured and progressed with his third offering. The film industry connection and his own experiences in Japan aside, the plot moves away from the autobiographical angle seen in Eighteen and Sleepless Night, though it’s no less intimate for it, and has a winningly naturalistic and laid-back feel throughout. While some viewers might find its meandering narrative and avoidance of artificial drama hard to get a hold on, it’s a deeply humanistic film with very likeable characters, the hour and a half spent in their company being engaging and pleasant indeed. Jang gets great performances from Kim Sae-byuk, Iwase Ryo and Lim Hyung-kook, and there’s a relaxed feeling to their interactions that is convincing and subtly moving, the film’s second half benefitting from a quiet romance that slowly pulls in the viewer along with the leads.

The film is also beautifully shot, Jang making great use of the gorgeous scenery without making things feel too picture postcard or touristic. Though the switch from black and white to colour is a bit jarring and pronounced, the film is atmospheric and easy on the eyes, its languid pace sitting comfortably with its hints and suggestions of profoundness, and its patient approach will certainly speak to viewers in tune with its charms.

For all its familiarity A Midsummer’s Fantasia is definitely one of the stronger Korean independent films of the last year, confirming Jang Kun-jae as a director to keep an eye on. Immensely likeable, well-made and accomplished, it’s easy to see why it’s proved so popular with domestic audiences, and the film should continue to win Jang more admirers on the international circuit as well.

A Midsummer’s Fantasia screened as part of the 10th London Korean Film Festival 2015.