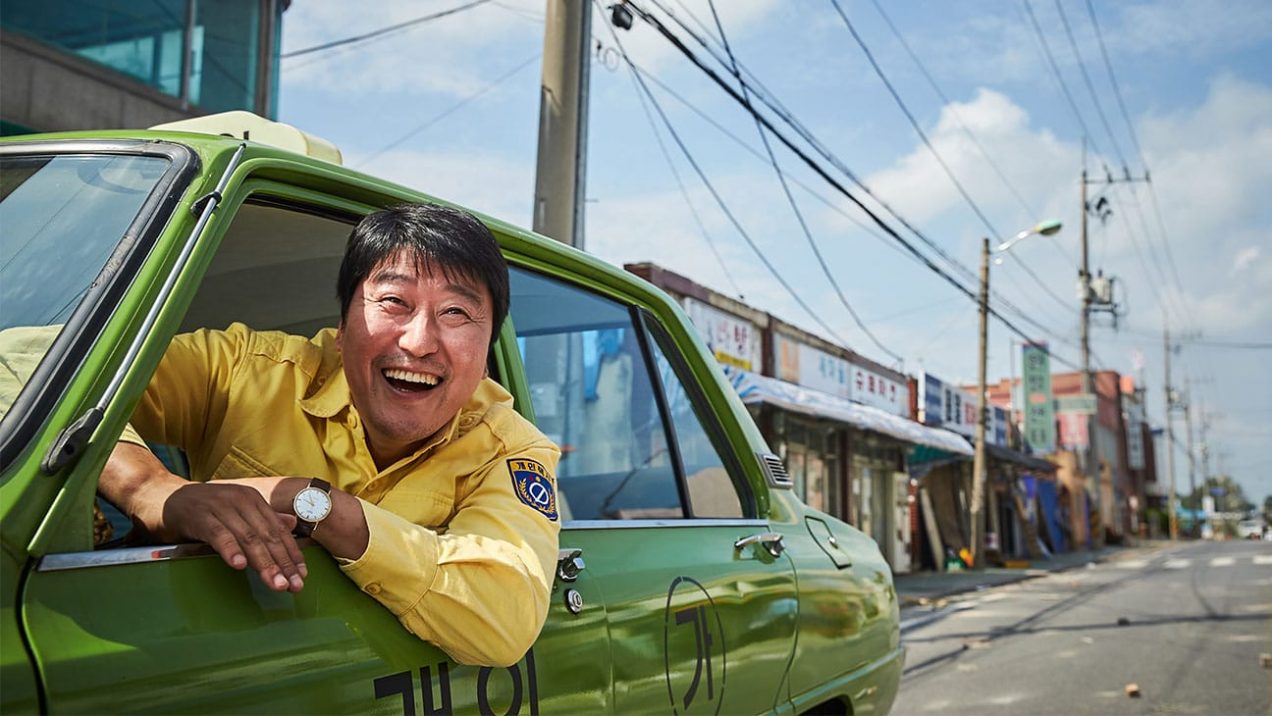 Director Jang Hoon (The Front Line, Rough Cut) and Korean superstar Song Kang-ho reunite for the first time since the immensely enjoyable (and popular) Secret Reunion. Jang’s film follows the route of the secondary protagonist who becomes central, as Song plays the eponymous lead in this historical drama re-enacting the events of the Gwangju Uprising in 1980 from the perspective of the taxi driver who took a German reporter right into the midst of what would become one of the notorious incidents in recent Korean history. In just two weeks the film has became one of the biggest hits at the 2017 Korean box office, quickly catching up with spy action flick Confidential Assignment.

The films context comes from the months following the assassination of President Park Chung-hee in October 1979, where new hopes for a democratic South Korea were raised then abruptly dashed by major general Chun Doo-hwan’s Coup d’état less than two months later. In early 1980 exchanges became more heated between pro-democracy demonstrators, mainly led by teachers and students, and the authorities. But our led protagonist thinks little more of the situation than irritation about it causes to the obstruction of daily traffic flow. Here we find widower Song Kang-ho struggling to bring up his daughter alone as a Seoul taxi driver.

By chance he hears of a foreign tourist offering big money to any driver that will take him to Gwangju. What he doesn’t realise is that the man (Thomas Kretschmann, Stalingrad, Avengers: Age of Ultron) is in fact a reporter, heading straight into a quickly spiralling situation there. What they find is beyond any expectations: a military regime-sanctioned massacre of students and civilians. (What the film does not cover, though implied, is that the population of Gwangju then took arms against the military to win the city back, for a few days at least.)

The events really happened, even though the identity of the taxi driver was never known. It’s been said that without the journalist (in reality the late Jürgen Hinzpeter) bringing the footage to the international stage, the government would have been able to largely cover the events up. Unsurprisingly, it’s left an indelible scar on the psyche of South Korea that, particularly with recent events, still reverberate today.

It’s also no surprise to find that those events have made their way to the screen several times before; from the 1995 SBS TV series Sandglass and Jang Sun-woo’s subsequent multi-award winning A Petal in 1996, through Kim Ji-hoon’s May 18 and Cho Geun-hyun’s manwha–inspired 26 Years. But even without that prior knowledge, it’s difficult not to feel we are on familiar ground. The allegations of corruption in government and eventual impeachment have translated into a multitude both true and fictional films, exploring dishonesty at the highest levels, but often in such a way that can be difficult for audiences outside of Korea to truly appreciate. We’ve even seen Song Kang-ho in a very similar role and historical period, playing The President’s Barber of Park Chung-hee. But if that’s put you off seeing the film, it shouldn’t…

Indeed, the role of the taxi driver is the perfect vehicle for Song, playing to all his strengths as comedic everyman, thoroughly obsessed with his own self-interest, but eventually seeing the bigger picture and how everyone can play a part (and thereby bringing the audience with him). Thomas Kretschmann’s character is also portrayed as a man initially more interested in just getting the story than more noble reasons. Kretschmann avoids the awkwardness so often seen by Western actors in Asian films, the two building a convincing friendship on screen as they struggle to communicate.

Writer Eom Yu-na hardly breaks the mould here. The fact that little is known about the taxi driver allows them to add narrative devices that help make him more sympathetic, such as making the taxi driver a widower and single dad. For his part Song holds the frame well, as the tone shifts from comedy as the pair witness the real horror of the events. Though always reliable, thos could well be one of his best performances in years outside of Snowpiercer.

Some elements also feel a little too fabricated, such as when the Gwangju taxi drivers rallying to the rescue when military authorities chase the pair. Though such a device is hardly unusual, and at least gets the film over the hump of the second half that lacks the initial pace and feels a little too drawn out. In terms of the production – save for the wonderfully chirpy Korean disco song that begins the film – other movies have more convincingly placed themselves in the time period. Though all things considered, perhaps that in itself is intentional?

Unlike many other recent historical films, one of the great strengths of Jang Hoon’s film is it doesn’t try to cover too much, keeping the timeline short and allowing the characters to breathe, however incidental. It also, perhaps with an eye on the international market, doesn’t play up the melancholy to the levels seen in other recent hits based on historical events. (Though sometimes the music by Jo Yeong-wook, who’s proven track record includes The Shameless, New World and Kundo: Age of the Rampant, plays too close to more emotive scores.)

With a solid supporting cast including Yoo Hae-jin (Fatal Intuition, Luck Key), Ryu Jun-yeol (Socialphobia, One Way Trip), Park Hyuk-kwon (The Tunnel, Secret Reunion), and a fleeting appearance from Jung Jin-young (Ode to My Father, Gangnam Blues), you can’t really go wrong. A solid film that tackles its subject matter well, A Taxi Driver deserves to get picked up for wider distribution in the West.

A Taxi Driver was released in South Korea on 2 August 2017, and is on limited release in USA and Canada. It was also the latest London Korean Film Festival teaser screening on 14 August.