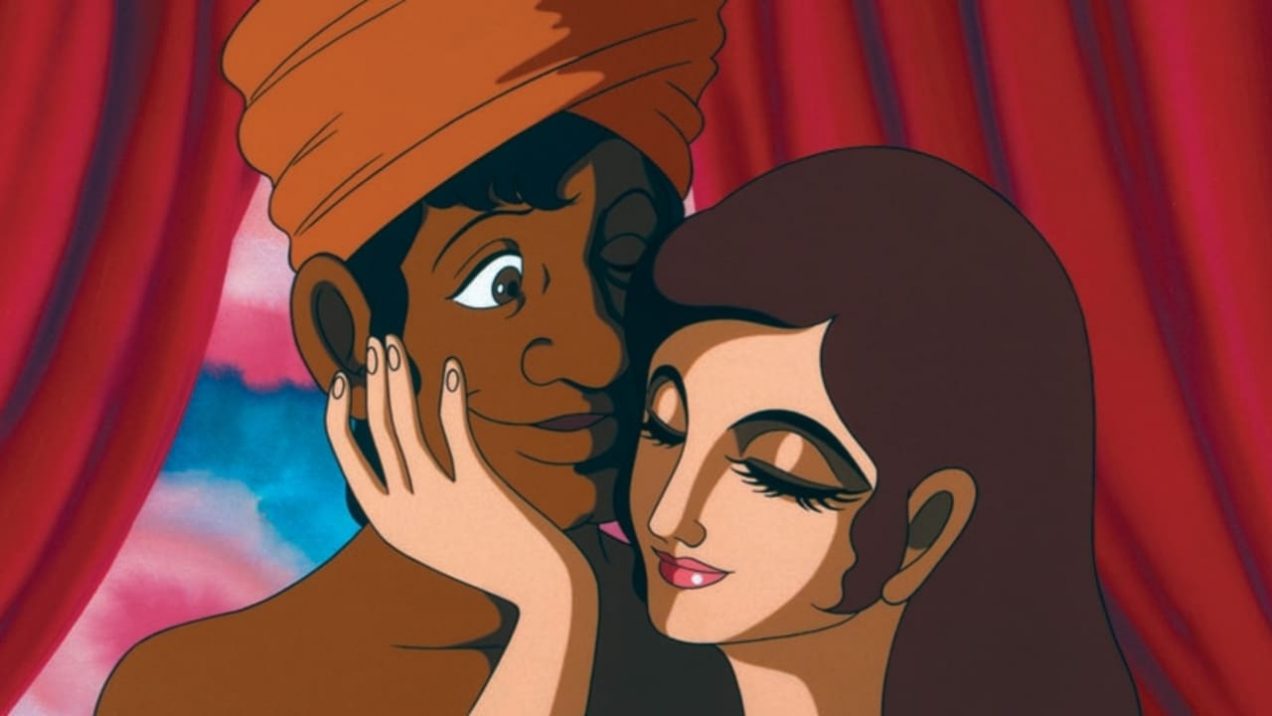 Fall into the world of Arabian Nights, anime style!…

Bit of background, in the 1960s Tezuka’s animation company Mushi Productions managed to produce some of the most popular Japanese children’s programmes, some including Astro Boy and The Amazing 3 managed to cross the oceans onto American screens. Tezuka, however, was concerned that anime was considered just for children, he wanted to show that it was appropriate for audiences of all ages including adults. This led to a trio of feature films that would be produced by Mushi Productions known as Animerama, anime films of a more adult nature depicting sex and violence for instance. The collection comprised of A Thousand and One Nights, Cleopatra: Queen of Sex and Belladonna of Sadness. A Thousand and One Nights would be produced by Tezuka and directed by Eichi Yamamoto, Tezuka would be primarily responsible for the story. What we are left with is a stunningly animated and surreal film that draws you into the raucous world of Arabian Nights, anime style.

The plot involves Aldin (Yukio Aoshima), a cocksure water vendor who travels to the city of Baghdad for new opportunities. He comes across a slave auction where a beautiful slave girl Miliam (Kyōko Kishida) catches his eye, he kidnaps her and the two fall in love. However, circumstances tear them apart leading Aldin to embark on several zany adventures meeting a wild array of characters, from the cunning chief of police Badli (Hiroshi Akutagawa) who is chasing Aldin’s arrest to the warrior-like daughter of a band of thieves Madia (Sachiko Itō). Every encounter eventually leads him back to Baghdad, but will he find his love again?

The plot isn’t straightforward much like the original A Thousand and One Nights. Tales within tales have been substituted for subplots within the main plot, so instead of the framing narrative of Scheherazade telling stories to the king for a thousand and one nights, the framing narrative of the film involves the journey of Aldin whilst other characters embark on their own adventures but are inexorably connected to him. The storyline(s) as a result are exciting and varied, taking you from an island inhabited by beautiful but bloodthirsty women to a sea voyage on a ship possessed by a sentient spirit. Every new predicament Aldin stumbles into is like a tale within itself that Scheherazade would entertain the king with. Furthermore, Tezuka has stayed true to the original source material with inclusions of some of the most famous tales including Sinbad and Ali Baba and the Forty Thieves. By blending the most well-known stories from A Thousand and One Nights while still using the technique of a framing narrative, Tezuka has succeeded in adapting the source material as a whole without having to adapt each tale individually.

The first striking thing about the film is the art, visually A Thousand and One Nights is a gorgeous film with a rainbow-like colour palate and stunning, almost psychedelic imagery. Even for 1969, I suggest it still rivals the likes of Ghibli today. There is also visual inconsistency where the art style changes several times throughout the film, a notable scene is where Aldin comes upon the den of the forty thieves where wild and almost surreal animation tells the story of the thieves within seconds. It’s a genius use of ‘show don’t tell’ but with very entertaining ‘show’ so to speak. But what’s A Thousand and One Nights without eroticism? There is a lot of sex in this film, but despite the raunchy and downright blunt display of sex in the books, a lot of lovemaking scenes in the film are surprisingly beautifully done. Despite some briefly cheeky scenes of wild sex, most sex scenes integral to the plot are never pornographic in their display but rather aesthetically done and even have an optical illusion look to them (trust me, you have to see it understand what I mean). This adds that exotic feel to the film that we come to expect from Arabian Nights, art that transports you to another world of mysticism and sensual pleasures. 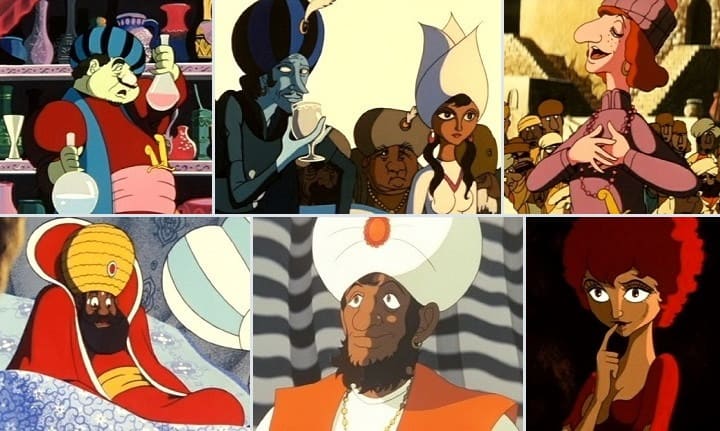 The downside to the art, however, may come down to the time period of production, there are a lot of repeated frames in some animated scenes which can grate on you. Storyboard art is also substituted for actual animation in many scenes, this blatantly stands out and it is unknown if this was done due to lack of time during the filmmaking process. Although going back to what I said about visual inconsistency, the storyboard art can create a nice break from the animation and give some variety to the viewing process. Even if it was a mistake, it adds to the artsy feel of the film. Tezuka also made use of real-life footage in scenes where large landscapes are featured, in scenes featuring the ocean for instance, rather than animating water we see footage of the actual sea substituted for it. This sticks out and doesn’t blend well with the animation at all, but again, this may be a product of its time.

The film incorporates a modern soundtrack, courtesy of Isao Tomita, with some funky guitar tunes to appeal to a global audience. This actually works in its favour given the hedonistic nature of the film, there are a lot of sex and drugs so the familiar guitar riffs compensate for the rock and roll. But for the traditionalists we still have some classical and even operatic music more appropriate for the exotic world of Arabian Nights, these pieces are used in the romantic scenes for instance.

Another standout aspect of this film is the gratuitous display of female flesh, there is a lot of female nudity in keeping with the adult nature of the film. It’s a gripe that makes the film hard to watch at times as female characters are largely there to be sold as property, sexually abused or objectified. Although I don’t have an issue with the erotic scenes which as mentioned before are beautiful to look at, it’s the treatment of women as characters that annoys me. Even admittedly strong female characters fall into this trap, Madia is a red-haired free spirit who fights alongside her father, the head of the forty thieves, and even aids Aldin throughout his adventures. At the beginning of the film she is raped by Badli and vows vengeance but in a complete turnaround, Madia later starts a consensual sexual relationship with Badli with no hint of the revenge she so clearly wanted. And of course, she is half naked throughout most of the film. Even Miliam seems oddly content when Aldin kidnaps her, claiming that he was the first man who didn’t treat her like property (even though he kidnapped her and actually tried to buy her before doing it). The filmmakers may be staying true to the original source material, but from what I have read so far of the original tales there is a share of smart, strong and capable female characters alongside sexual and objectified ones. Perhaps in keeping with the adult theme of the film, the focus remained on the latter, so modern-day viewers may have trouble with this. In fact, the film didn’t appeal to non-Japanese audiences when it was first released in the United States, an X-rated animated film was just too unusual for American audiences who were used to animation being just for children.

A Thousand and One Nights is an underrated animated film that slipped from history due to its explicit content, but that doesn’t undermine the exquisite animation and fantastical plot that would dazzle any film lover. If you are a fan of Tezuka and adult anime this hidden gem worth a viewing.

Cleopatra is released as an Animerama double bill with A Thousand and One Nights on limited edition Blu-ray and DVD by Third Window Films from 18 June 2018.