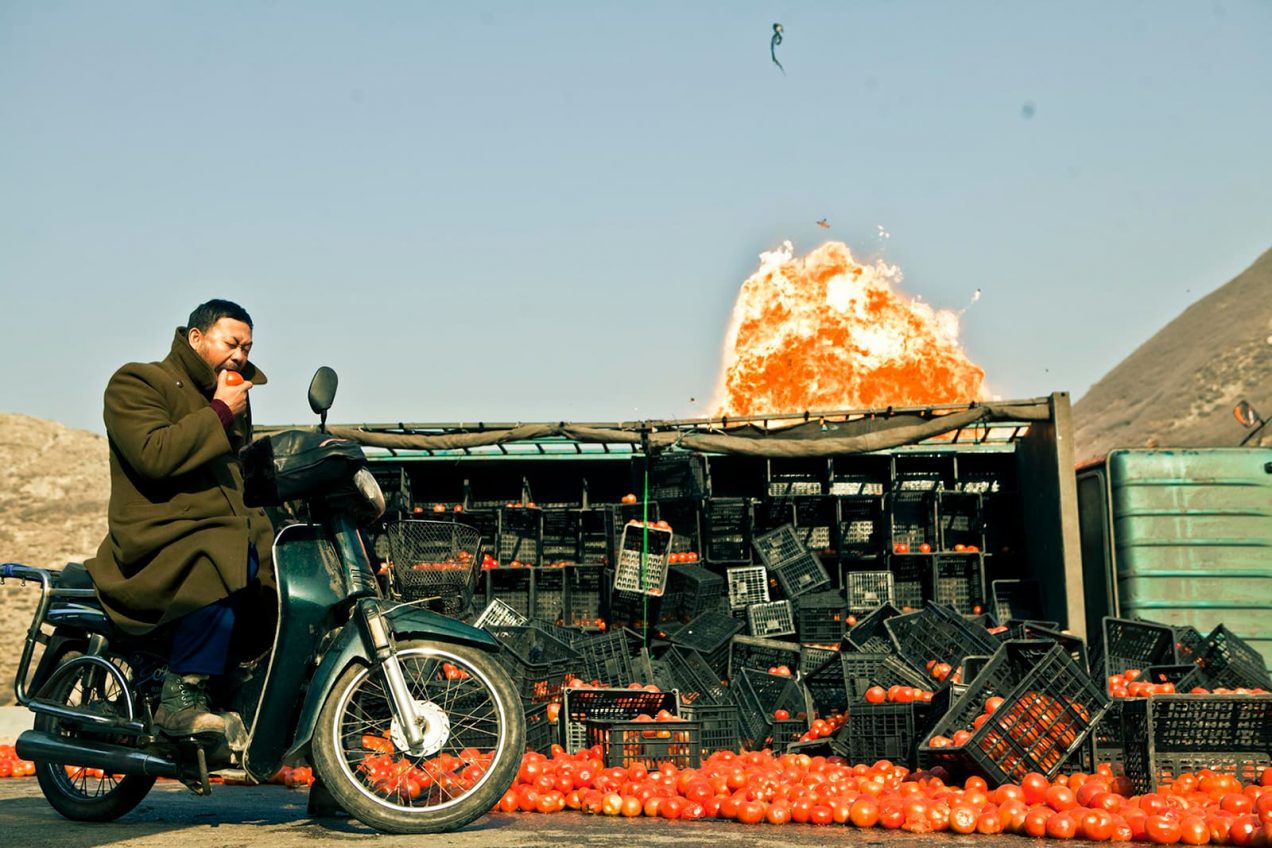 It’s difficult to say how much modern audiences are truly desensitised to violence. We’re certainly used to violence as a concept; violence as a solution to an issue, whether committed by heroes or villains. It’s hard to say the exact purpose that the acts of violence serve in A Touch of Sin, but director Jia Zhangke at least aims to provide violent acts with justification, with a burning impetus, to the point that violence comes to be the only option.

A Touch of Sin is something of an anthology film; taking inspiration from anonymous stories posted on the social networking service Weibo about seemingly random acts of violence. The characters are from numerous different backgrounds, ranging from a mine worker in Shanxi to a prostitute in Guangzhou. The audience is given background on the events that lead to the violence, but are told nothing about what happens afterwards, all of the stories ending on an uncertain note, lingering in the minds of the viewers as they ponder what could possibly come of what they just saw.

There’s something incredibly mythic about A Touch of Sin. The opening story is set in Shaanxi, our protagonist barreling down the road on his motorbike, he sees an overturned truck, then an explosion at the side of the road. It looks like it comes straight out of a post-apocalyptic setting, it couldn’t possibly exist within the realm of what we’d consider to be ‘modern’. It’s not something one is particularly used to seeing in contemporary Chinese cinema, and it hearkens back to the timeless rural settings in the early works of Zhang Yimou and Chen Kaige.

Jia cultivates rural Shanxi’s sense of distance from what we may know about China and makes even the act of showing this feel like an act of resistance.This is the only one of the four narratives in which the audience is confident that the perpetrator will not be caught, it never felt like anyone was keeping laws there anyway. It’s a terrifyingly stark way to open, and it’s absolutely perfect for what A Touch of Sin manages to do with its subject matter.

The sense of unreality continues into the other stories, as Jia intertwines notions of genre with touches of the social realism that he is better known for. It’s not just the stylish way in which violence is used, but in the assembly of the narrative itself, and the visuals that compliment this.

The colours are incredibly vivid, and each story has its own palette that remains fairly consistent throughout, and some of the shot choices are so stunning that the viewer comes to understand that they could only have been meticulously composed. It’s almost as if Jia is attempted to disguise the film as a marketable revenge thriller, with the central characters all miraculously transforming into amazingly cool killing machines when but one scene earlier they were struggling for cash, living on the underbelly of society.

This brings us to A Touch of Sin’s masterstroke, to humanise the faceless, nameless people in the Weibo reports that inspired these stories. What with the usage of genre conventions and the almost comic-book nature of the violence, one may expect the characters to be soulless vessels of revenge, but much of the film is focused on the realities of living in China in the present day, rather than being a mere spectacle.

Wang Baoqiang’s plays a bank robber who mercilessly guns down a pedestrian, sure, but his home life is also detailed, we see his partner, we see his financial struggle. It’s not a matter of absolving the crime, more of such extreme levels of contextualisation that the viewer ceases to question why the characters would commit these acts of violence, and come to search for any reason why they wouldn’t.

On top of this masterful script, every central performance utterly sells the desperation that the characters find themselves in in a unique way that seems utterly fitting within each narrative. The previously mentioned Wao Baoqing has a quiet mania to him, Jiang Wu is powerfully stoic as a beleaguered mine worker; think Song Kang-Ho in Memories of Murder but far more competent and dangerous.

Perhaps best of all are the central performances in the final two stories; there is a headstrong feeling to Zhao Tao’s hostess, at once the most likely to kill but also the most likely to be able to keep the desire to do so under control. Debutant Lanshan Luo is also fantastic in his role as a hospitality worker who feels his sense of self slowly get eroded more and more by the job drudgery, by the big city, by having to exist as a drop in a limitless ocean.

It’s in large part due to the nuances of these performances that stop the anthology structure from feeling jarring. It’s not that the same thing happens across China, it’s more that similar things happen for different reasons, and all four lead actors create distinct characters in distinct stories who respond to a helpless, crushing situation for different reasons.

It’s not explicitly a social commentary, but it’s an attack on something, a rallying cry saying “we can’t go on like this”. All this, and it still legitimately feels like a tense, brilliantly crafted genre film. Jia has found an intriguing concept and performed a remarkable balancing act to create a startlingly brilliant piece of work that demands attention at all turns.

A Touch of Sin is quite simply a remarkable feat. From its first shot it draws you in with its elegant composition and saturated colours, and from there it’s a two hour rollercoaster of revenge on the bottom rung of Chinese society. Rather than lecturing the viewer, Jia lets the points stand on their own whilst making one of the most thrilling revenge flicks in years. It’s brutal, nasty, and difficult to watch, it’s both an exposition and a caricature. It doesn’t revel in the fact that it’s based on true stories, but celebrates everything that is cinematic about itself. You can’t make stuff like this up.

A Touch Of Sin is released on the upcoming Three Films by Jia Zhangke Blu-ray boxset from Arrow Academy on 29 January 2018, including 24 City and Mountains May Depart, and Walter Salles’ documentary Jia Zhangke: A Guy from Fengyang.