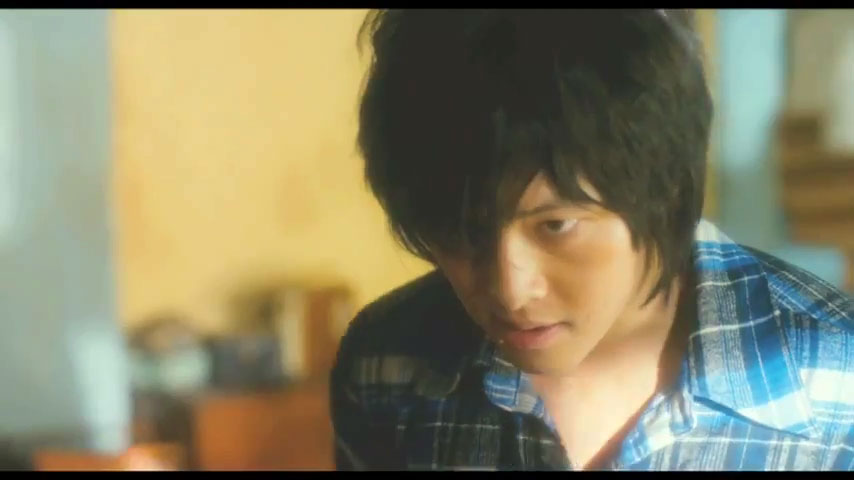 One of the biggest hits at the Korean box office last year, the director of End Of Animal returns with a note-perfect cute romantic fairy tale – hey, hang on…

Sometimes it’s what a director does next that can be the most surprising.

When Suni returns from the US to sell the family home, it brings back memories of the few short months she lived there with her widowed mother and sister some 47 years earlier. Moving out from Seoul to the rural countryside, partly due to Suni’s health, there are only a few local families and no one of her age.

After hearing strange noises from a locked room in an outhouse, she discovers a young boy of similar age who they presume to be an orphan from the Korean War. Naming him Chul-soo, her mother agrees to look after him, while Suni takes it upon herself to civilise the boy, who behaves more like a wolf.

Slowly, she begins to fall deeply for Chul-soo as he becomes besotted with her. But Ji-tae, son of Suni’s late father’s business partner who acquired the house for them, gets jealous of their budding relationship and begins to stir up trouble…

Jo Sung-hee’s debut film End Of Animal was a brave, Spartan, dystopian vision of a near future where society has broken down after an unspecified apocalyptic has brought the world to its knees and left few survivors. In his dark, ominous film, no one was without fault, and nearly all of his characters were motivated by greed, selfishness and self-preservation: hardly an optimistic view of mankind. So a heart-warming romantic drama might not have been what you were expecting…

Which is not necessarily a criticism.

Jo’s follow up is an unashamedly romantic fairy tale, though rather familiar. After fellow critic Hangul Celluloid made the comparison, it was impossible to shake Burton’s Edward Scissorhands from my head, though you could just as easily compare to Nick Castle’s (the original Michael Myers of Halloween) The Boy Who Could Fly; many films share familiar motifs, particularly around perceived outsiders and romance. (Though sandwiching the tale between modern day Suni remembering the story is rather too close to Scissorhands.)

There’s more than a little of E.T., with maybe just a touch of D.A.R.Y.L. thrown in. The relocation of the family from urban sophistication to the simplicity of rural life recalls a recurring trope in Studio Ghibli’s films from My Neighbour Totoro to their adaption of Mary Norton’s classic children’s tale The Borrowers, Arrietty. A more recent Japanese animation, Mamoru Hosoda’s Wolf Children, skates rather closer in both story and tone.

You could accuse Jo of cynicism aiming towards a post-Twilight romantic fantasy audience, itself having far outreached the expected female teenage – if he hadn’t made such a good job of it. He doesn’t only write likeable characters in endearing situations, he manages to get great performances from his cast, particularly the youngest members. Song Joong-ki (Penny Pinchers, A Frozen Flower, The Grand Heist) plays the (pretty much) mute Chul-soo perfectly; throwing himself into his characters animalistic side, there’s no dialogue to rely on. Alongside Park Bo-young (Blood Boiling Youth, Scandal Makers, If You Were Me 4) as Suni they make a cute couple; audiences can believe in this on-screen romance. Even with the Twilight comparisons, this is a decidedly chaste relationship, with hardly a kiss between them.

Considering the state of Korean cinema right now, dominated by the few big distributors, you can hardly blame Jo for choosing something rather commercial to get his career off the ground. A novelization was even released to coincide with the films release, so you know you’re in blockbuster territory then. Director Jo has taken the critical acclaim he received to build opportunities to make such films. You might wish he’d chosen something more challenging, but you have to admit it’s paid off – and the result is one of the better ‘commercial’ films to come out of Korea last year. You wonder what this says about the career goals of directors working in Korea now, or is he just playing the long game?

It’s a good-looking film, which brings a little more of those elements from the classic Universal and Hammer incarnations of the werewolf alongside Yim Pil-sung’s revisionist take on the Brothers Grimm fairy tale Hansel And Gretel. Even the makeup is more inline with the hirsute additional sideburns rather than ‘full wolf’ of John Landis’ American Werewolf In London and every Rick Baker inspired transformation since. But then this isn’t actually a werewolf: the literal translation of the Korean title 늑대소년 (Neukdae Sonyeon) is ‘Wolf Boy’, far more appropriate for a young man who turns out to be the result of sub-Captain America super soldier experiments.

In Ji-tae (Yoo Yeon-seok, Horror Stories, Architecture 101) we find a disappointingly one-dimensional villain, his actions flagged long beforehand as being the rather obvious bully we all take him for. But perhaps some of Jo’s previous leanings still show: when the elder Suni (spoiler alert) looks back with regret, it’s not at the romance she could have had with Chul-soo, but that her naive last message has led to him losing out on any sort of life, while she has done everything she ever wanted to do in hers. So maybe we’re not so far from his dystopian vision of mankind after all…

(An alternative ending exists which was released with the film for a while in Korea, and included on the Korean DVD/Blu-Ray release, where Park Bo-young takes the place of her older counterpart. Though this plays to the innocent romance, it actually loses rather the point of Jo’s conclusion.)

A Werewolf Boy screened as part of the Terracotta Far East Film Festival, and is currently available on Korean Blu-Ray and DVD.