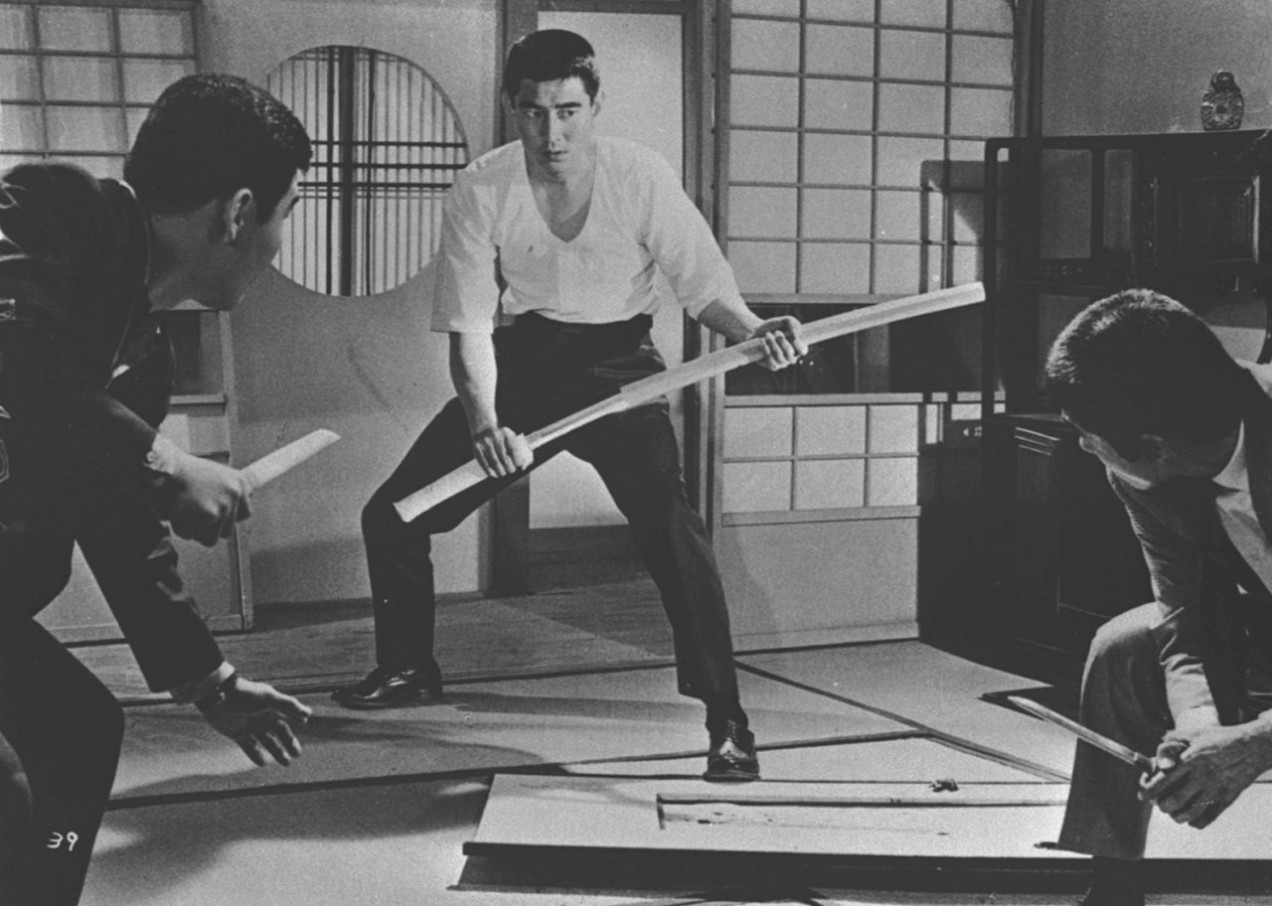 Today, Teruo Ishii is mostly known for his exploitation films of the late 1960s and 1970s bordering between artsy style-over-substance and trashy entertainment. However, his greatest commercial success he achieved with the 10 films he directed for the Abashiri Prison series.

In 1965, Ishii directed the first film, until 1972, seventeen more entries should follow, everyone of them a great box-office hit, most of them even among the top 10 highest-grossing feature films of their respective year.

Through the series’ success, Ken Takakura, star of all 18 films, was catapulted into stardom. Even the title song “Abashiri bangaichi”, sung by Takakura himself with a sonorous voice, became a popular tune and is today considered to be a well-known classic of the enka, the Japanese pop ballad.

Therefore, Abashiri Prison is not only the yakuza eiga series with most entries, but also by far the most successful film series of the 1960s. Nonetheless, its influence on the yakuza subgenre of the ninkyo eiga seems to be somewhat overrated. Back in 1965, the genre about honourable yakuza fighting against greedy modern gangsters of the present was already well established and had even found its most iconic star, Koji Tsuruta.

On the other hand, Ishii’s films is foremost a prison breakout film with some ninkyo elements, a remake of the American classic The Defiant Ones (1965), situated in the inhospitable and snow infested realms surrounding Japan’s notorious Abashiri prison

Nonetheless, Ken Takakura was elevated into the status of a national icon after this first film and became a role model for Millions of Japanese. Ironically, all because of this little, if very entertaining B movie whose style pays tribute to the classical Hollywood cinema.

After he attacks the boss of an opposing clan, yakuza Shinichi Tachibana (Ken Takakura) is sent to the notorious Abashiri prison. His exemplary behavior within the prison walls soon attracts the attention of the lawyer Tsumaki (Tetsuro Tanba) who promises to support Tachibana on his wish to visit his terminally ill mother. But then everything goes wrong: The nasty prison bully Yoda (Toru Abe) attempts to escape together with his henchmen Gonda (Koji Nanbara). Tachibana, who is chained to Gonda with an ankle bracelet involuntarily, has to join his enemies on their dangerous trip through the snowy plains of Hokkaido…

Foremost, Abashiri Prison is a classical prison film incorporating every cliché of the American counterparts like the obligatory prison bullies (led by prolific villain impersonator Toru Abe) and even the well-known prison workshop brawl that, of course, ends in mutilation.

However, in all honesty, Abashiri Prison often seems to be much less sophisticated than the best American prison films like Brute Force (1947) or Escape From Alcatraz (1979). Teruo Ishii is less interested in integrating social critique than in providing rock solid action entertainment.

In contrast to the relatively tame The Defiant Ones (1957), Ishii’s film offers a multitude of thrilling action scenes and some Hitchcock-esque moments of suspense. Chained together, the two unwilling allies have to face the sprawling snow regions of Hokkaido, tormented by freezing temperatures, not the sun of the south like in Stanley Kramer’s original film.

Cinematically, Ishii’s directorial style was always influenced by that of the American cinema mavericks of the 1940s. In contrast to the classic Japanese masters of cinema, Ishii’s direction is rather free-wheeling, not inspired by picturesque images, but by the dynamics of movement making for a visually rather shallow, if highly entertaining film.

Elements of the ninkyo eiga are merely integrated to characterize our protagonist. Ken Takakura’s Tachibana is a honest man, no unscrupulous criminal like his fellow inmates. A honorable yakuza who merely fulfilled his duty towards his clan by attacking an opposing oyabun (“yakuza boss”), but who basically just tries to life a decent live.

At least the cast offers many well-known character actors like Tetsuro Tanba or Kunie Tanaka best remembered for their countless portrayals of honorable yakuza or petty criminals. Most impressively is the appearance of legendary silent film star Kanjuro Arashi who, at 62 years, proves that he is still capable of giving an intimidating and powerful performance as the imprisoned oyabun Onitora.

In the end, however, Abashiri Prison is an action-packed entertainment film in the best sense of the word offering, among other scenarios, an exciting railroad handcar chase scene at breakneck speed. Without any safety precautions, the scene was extremely dangerous to film and act. Yet, it were the actors themselves who endangered their lives to grant the audience a moment of nail-biting escapism.

Considering its B movie format, Abashiri Prison may not quite deserve its gigantic influence, but it’s certainly a work of passion. The narrative maybe hampered by clichés, the characters are not much more than cardboard cutouts, but Abashiri Prison is filled with enthusiasm which undoubtedly conveys itself well to an audience demanding nothing more than roughly 90 minutes of pure fun.