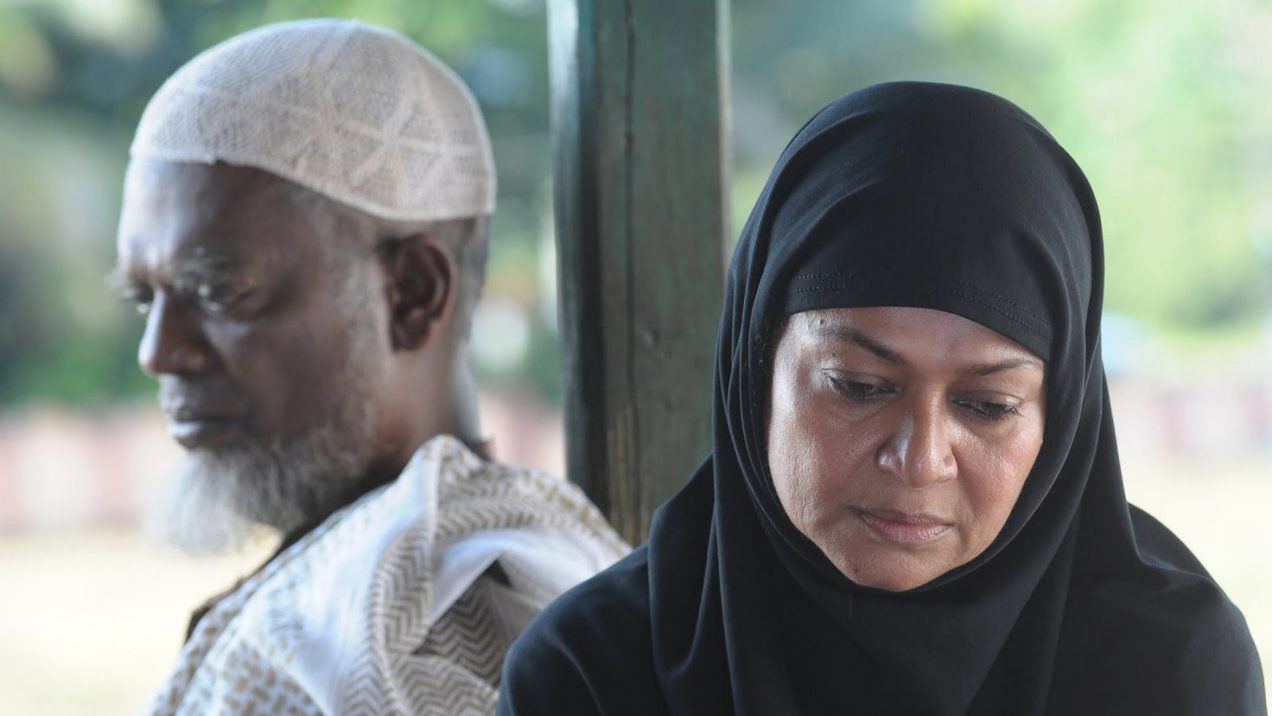 A simple tale, beautifully filmed and acted, and a rare insight into Muslim life in Kerala…

Set in the Southern Indian state of Kerala, Abu (Salim Kumar, Achanurangatha Veedu, Gramophone, Perumazhakkalam) is a salesman of the traditional perfumes that are no longer in fashion. His son has deserted him and his close friends are dying of old age around him. Alone with his wife Aisumma (Zarina Wahab, Chit Chor, Gopal Krishna, My Name Is Khan), in their small country house, Abu decides to fulfil their lifetime ambition – to go on the Hajj, a religious pilgrimage to Mecca, for which he has been saving rupees for years.

When he speaks to the local travel agent, he finds he has fallen out of step with modern times, the cost is more than expected and they need passports to go there. They realise they must sacrifice much if they are to make it to Mecca. Though friends offer to help, in accordance with Hajj Abu and Aisumma are not allowed to accept charity, they must find his own way there.

Beautifully shot by director of photography Madhu Ambat, director Salim Ahamed captures a rarely seen side of Muslim life in Kerala within a small village. Ahamed follows the story of Abu, a pious, hard working man respected and loved by his community as the tale gently unfolds. It’s an incredible performance by Salim Kumar, whose expressive performance says so much even without words or actions.

It’s hard not to want to make some sort of political point about this movie; it’s almost a great advert for Islam. Just imagine how a film like this would play out in the West, if the main protagonist was to go on a Christian pilgrimage instead: the local community would rally round to ensure they went on their trip. But though audiences (and maybe even in India?) may desperately want Abu to accept others help, of course that isn’t part of Hajj tradition. That Abu is so accepting of Allah’s will only adds to the poignancy of the story.

For all the seemingly rustic setting it’s a modern take on Muslim life: storekeepers doubting how Abu could possibly afford to go to Mecca joke he must have received a cheque from Osama Bin Laden. Director Ahamed shows he doesn’t only respect tradition but also is savvy enough to place his tale within the modern world.

Abu, Son of Adam is a beautifully gentle, touching tale that plays out like an adult fable. Unsurprisingly it’s been widely acclaimed since it’s release earlier this year, and won numerous awards at the 58th National Film Awards for the best in Indian cinema. Let’s hope it finds a wider audience outside of film festivals, and as India’s official entry to be considered for nomination in the Best Foreign Film category for the 84th Academy Awards it just might…

Abu, Son of Adam was shown as part of the London Film Festival.

ALTERNATIVE VERSIONS:
There’s definitely a different version of this film made for the original Indian audience. There are more songs, and the artists to one of them appear in a sequence roughly 40 minutes in where Abu is shown selling his goods that quickly turns into something of a hilltop music video.

It doesn’t necessarily spoil the film, but it still seems incongruous with the rest of the film. It also seems rather patronising of the filmmakers to suggest that Indian audiences wouldn’t watch a film without a song and dance number.