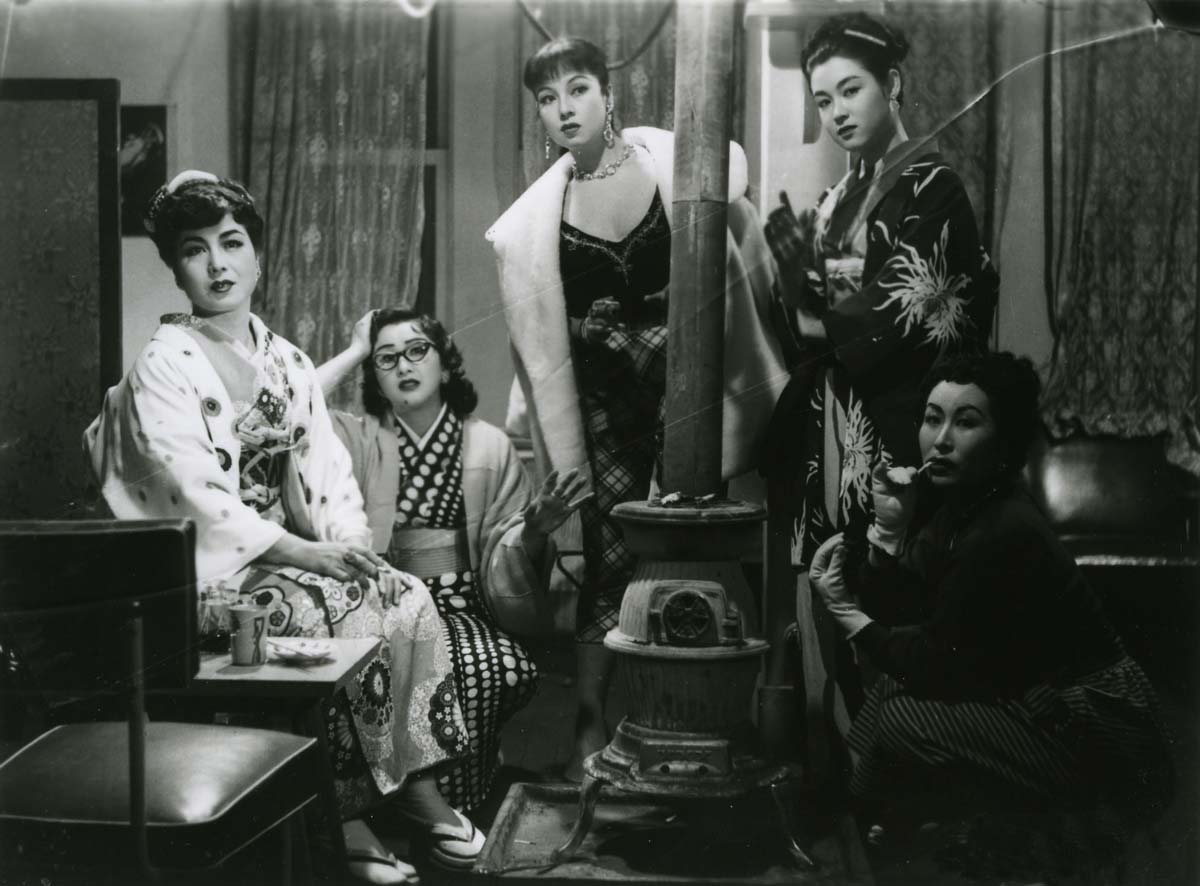 Street of Shame‘s original title Akasen Chitai literally means “red-line district”, opposite to the blue-line district with the difference between them being that the first one was legal, the other illegal; yet, as Tony Rayns says in the audio commentary of the Masters Of Cinema Blu-ray edition, Akasen Chitai has a lot to do with shame.

War shaped Japan in a much different way from what it used to be, customs and façades both changed to fit a world drawn to the unique path of globalization. Teahouses and Geisha were part of the past; their consideration during the Twentieth century was more and more closer to that of prostitution.

In 1956 the Kokkai, Japan’s legislative council, was in a turmoil because of the Anti-Prostitution Law which eventually was approved in May 1956 (two months after Akasen Chitai was released) and fully active by 1958, leaving those who were used to a certain life-style with one question: what would have been of them?

Kenji Mizoguchi knew this world. He often lived it as a customer, scarred for life by a prostitute who stabbed him in the back in his youth, but mostly because of his sister, who sacrificed herself for her family by deciding to become the mistress of a Viscount. He has also, obviously, portrayed Geisha many times in his career and somehow seems appropriate that his last movie was taking a last peek at the profession trying to give the audience a ultimate glimpse inside a dying world.

His experiences might be the guilty sparks from which most of his women in film have born, many anticipated Akasen Chitai coral representation of the fictional Dreamland, the teahouse where the movie takes place with all its various sub-plots.

All of the stories involving the geisha have at least a pinch of shame moving them: Hanae (Michiyo Kogure, Drunken Angel, The Tale of Genji) hardly maintains her husband and son trying to outlive their despair; Yumeko (Aiko Mimasu, The Loyal 47 Ronin, Osaka monogatari), a woman in her forties, uses all her earnings to pay for his son’s college fees without having him knowing what she does for a living; Yasumi (Ayako Wakao, Floating Weeds, The Loyal 47 Ronin) exploits her clients in order to gain an economic freedom; Mickey (Machiko Kyo, Ugetsu, Yokihi) uses her body to annoy a father who showed no respect to his family.

Shame will step in as the subtle fate every single one of them will meet, some thanks to Mizoguchi himself, who apparently added several scenes to Masahige Narusawa’s screenplay adapted from Yoshiko Shibaki’s novel. Not surprisingly, those scenes are actually the better one, resembling images we’ve already seen in some of Mizoguchi’s previous films but more mature, as if he had acquired a knowledge that enables him to catch perfectly the emotional side of a human life without the urge to deprive them of the necessary aesthetics.

It’s the end of an era that with a handful of days uncovers what will happen when the Anti-Prostitution law will pass, when they’ll lose their job and left in the street without the government to help them out of their situation, with a bare future in their closet and a present which had given them no self-respect to live with.

On the 24th August of 1956, three months after the Anti-Prostitution Law passed, Kenji Mizoguchi died in Kyoto. He directed masterpieces such as Sansho Dayu and Ugetsu, but rarely he has been so sadly realistic as he had been in his, unfortunately, last movie, Akasen Chitai.

The Late Mizoguchi limited edition Blu-ray boxset is available now from Masters Of Cinema. The set includes Oyu-sama, Ugetsu monogatari, Gion bayashi and Sansho dayu, as well as Uwasa no onna, Chikamatsu monogatari, Yokihi and Akasen chitai – which will only be available as part of this set.

This post is concludes Fausto’s ongoing series on Mizoguchi.