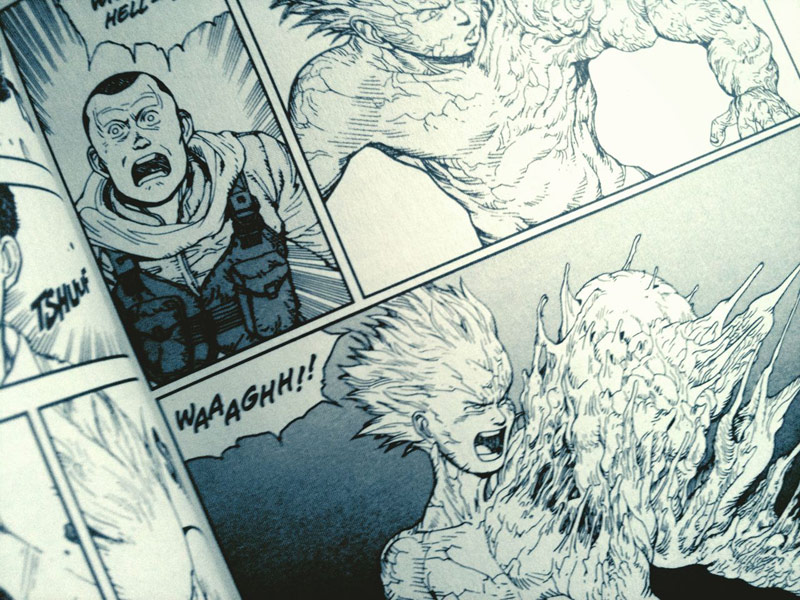 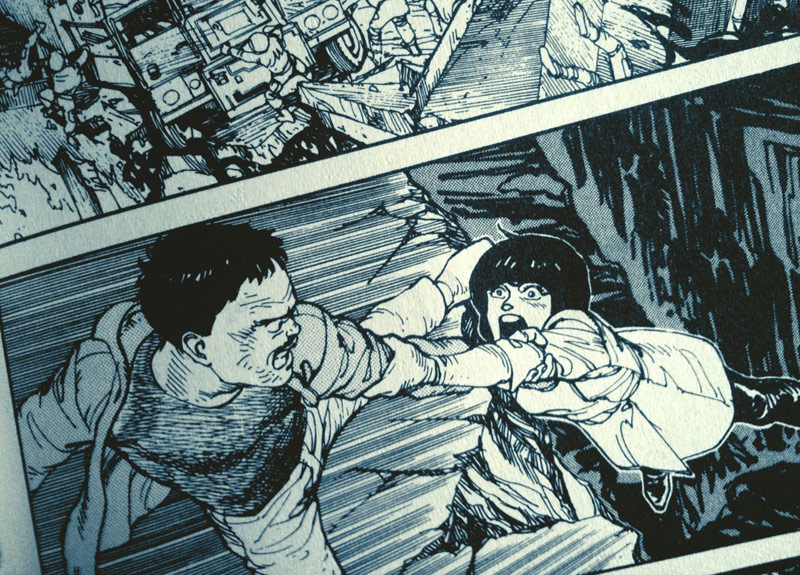 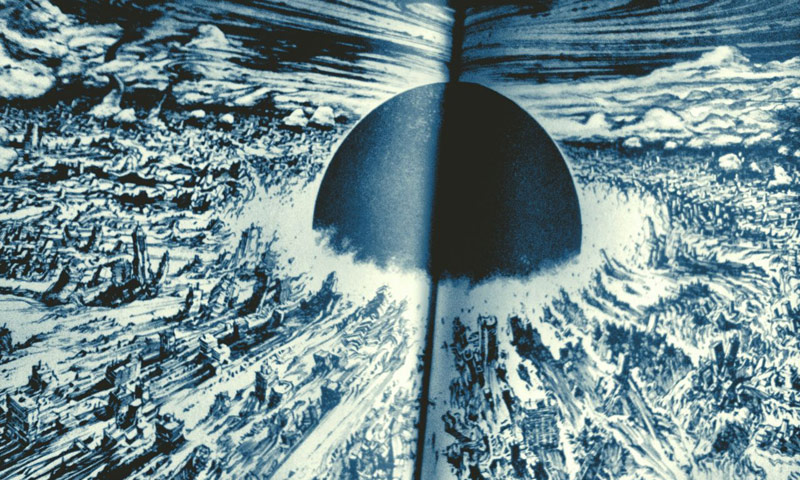 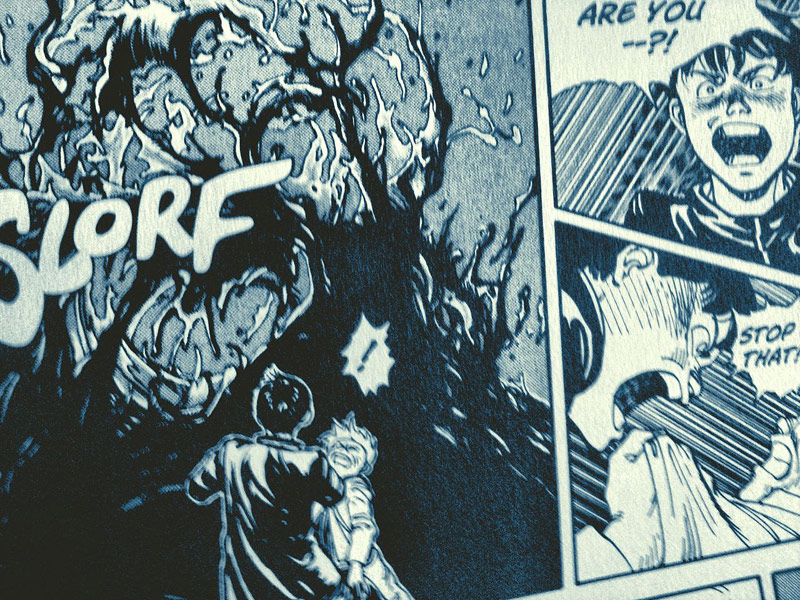 Before the film, there was Katsuhiro Otomo’s manga. Well, not really, it was still being serialised when the Anime came out, but I digress…

30 years after Toyko became the first victim of World War III, Neo-Toyko has been reconstructed in its place, a new Olympic site built on the epicentre of the explosion. High school dropouts and biker gang members Kaneda and Tetsuo are about to find themselves at the centre of a secret government project to tap into telekinetic powers when Tetsuo meets one of the subjects, and finds he too has some latent abilities.

Unfortunately the government don’t know what they’re playing with when it emerges that Tetsuo could be as powerful and dangerous as the previous subject Akira, and this activity is beginning to wake him up from his containment way beneath the new Olympic site. After causing havoc joining up with a rival gang, the escaped Tetsuo soon goes in search of his predecessor – and then all hell breaks loose.

Suffering another devastation close to the impact of 30 years before, civilisation breaks down, with Tetsuo and Akira forming the Great Tokyo Empire in its place, feeding drugs to followers to keep them keen. Only religious leader Lady Miyado, together with Kaneda, former revolutionary Kei and the last remaining survivors of the government project, stand in their way.

But soon Tetsuo’s power begins to overwhelm him, the entire world is in danger of destruction…

Unsurprisingly, like most people I came to Katsuhiro Otomo’s original manga long after enjoying the film. And, again like most, I have to admit to the 6 volume, 2,000 plus page tome cutting a rather imposing, uninviting weight on my bookshelves for quite a while now. I shouldn’t have been so intimidated, in fact the piece rattles along at a rapid pace.

For the main part it’s action, not words, that push along the narrative in a way that can easily be referred to as ‘filmic’ or ‘cinematic’. Though not uncommon for manga by any means – just look at Kazuo Koike and Goseki Kojima’s Lone Wolf and Cub, for example – Otomo takes this further, outlining each part of the action in minute detail, to the point where even these pages look like a storyboard. (And having seen the films storyboards on the Blu-ray, that’s not so far from the truth.)

It’s bustling full of energy, propelling the reader through the books many pages as if the action was unfolding on screen in front of them. (Which later, of course, it would.) It’s easy to see how far towards moving pictures Otomo was heading.

It seems strange to say it now, but even into the late 80s this was still a revelation in comic book narrative in the West. Comics had to work hard to sell an issue, rarely running a plotline from one to another, let alone daring to run frame after frame without dialogue (or as is often the case in Otomo’s work, any more than grunts, cries and sound effects). That has changed significantly now, led by the impact of Alan Moore and Dave Gibbon’s Watchmen, Western comics understand how potent the medium of imagery can be – particularly when paired with powerful, thought-provoking themes. (Gibbon’s is one of many artists who have admitted how influential he found manga and Otomo’s Akira in particular.)

As with his previous work Domu, Otomo dwell’s on his urban environment with candour and satire. More than the eventual film, this future is closer to our own, making the eventual disintegration of society after the second explosion and the formation of the so-called Great Tokyo Empire all the more shocking. As I mentioned in my review of the film, as someone growing up in the 70s reading British comics like 2000AD, this really struck a chord.

There’s a certain synergy with the ideas of British writers and artists like Moore, Gibbons, David Lloyd, Pat Mills and John Wagner, who lived through riots and demonstrations of the 60s and the promise of a better world, only to find a grim reality in the 70s of high-rise flats and a Thatcherite government. The dystopian future shown in Judge Dredd or V For Vendetta is not so far away from what we find in Otomo’s work, if little other than Moore’s Watchman and Miracleman truly match its scope and vision – and to a large extent its themes.

The painstaking detail of Otomo’s illustration is breathtaking. Even wrecked, the skyscrapers of Neo-Tokyo are relayed with the kind of exactness that suggests (political correctness out the window) autism. In those 2,000 plus pages, there’s not a bum frame, not one hint of ‘phoning in’ a panel in order to fulfil his commitment to the publishers. And it was that precision he took into adapting the work into a feature length film.

Originally the story was serialised in Young Magazine between 1982 and 1990, and occasionally this becomes obvious. There’s a plot point early on where Kaneda finds out he’s made his sometime girlfriend, the school pharmaceutical nurse, pregnant that quickly becomes irrelevant to the plot, other than underlining what a thoughtless little cad he is. It’s said that Otomo himself was never entirely satisfied with neither the manga nor anime of his work, and he just didn’t quite know how to finish it.

For the main part though it’s an incredibly well thought-out piece. Certainly the animated adaption gave Otomo the chance to reappraise the first half of his work and significantly change and restructure the plot. Nowadays, you could imagine it being adapted by a third party, and either trying to stick too close to the original and wheeling out three films, or missing point entirely. Thankfully that didn’t happen.

For fans of the film, the second half of the work will be most surprising, as the film completely omits the founding of the Great Tokyo Empire in order to combine both showdowns with Tetsuo into one – which would have become repetitive. As well as major plot points, Otomo was pretty ruthless with characters in his own work.

There’s a certain joy in watching the Colonel Shikishima character warm and become more sympathetic as the work goes on. Lady Miyado is far more important to the plot, becoming little more than a cameo in the film, and Kei’s heavyset, heavily-armed, revolutionary friend Chiyoko doesn’t even appear (undoubtedly some of the influence behind the lead character of The Legend Of Mother Sarah, which Otomo wrote and created). It’s Kaori, cast as Tetsuo’s girlfriend in the film, but forced into serving him in the manga, who comes to an unexpected but touching end.

The influence of Akira as a manga is as assured as the film, but one character stands out. The blindfolded Birdman acts as the Great Tokyo Empire’s ‘all seeing eye’, the symbol on his blindfold is unmistakably close to that of the mysterious and enigmatic Friend shown in Naoki Urasawa’s long-running manga series 20th Century Boys, which itself was adapted into three live-action films.

(And for me, there was more than a little amusement to be found in setting the main part of the action in a newly built Olympic stadium. Maybe that’s just ‘cos I can see the new Stratford stadium being constructed from my window, but I can help thinking the architects had Akira in mind. And yes, I am wondering what’s beneath…)

The English edition, originally published by Dark Horse Comics in the US, does an overall far job of adapting the work. It must be said, though, there is an overuse of American colloquialisms and vernacular that has been quite popular in translations for both subtitles and illustrated work (often now more than a little dated!). You know, to make it chime with the kids, innit? Personally I find there can be too much alteration in the original meaning – I’m a bigger fan of the ‘explained notes’ approach, and I think some greater understanding could be gained from it.

This is one hell of a ride, from cover to cover, and a must-read for Anime and graphic novel fans!