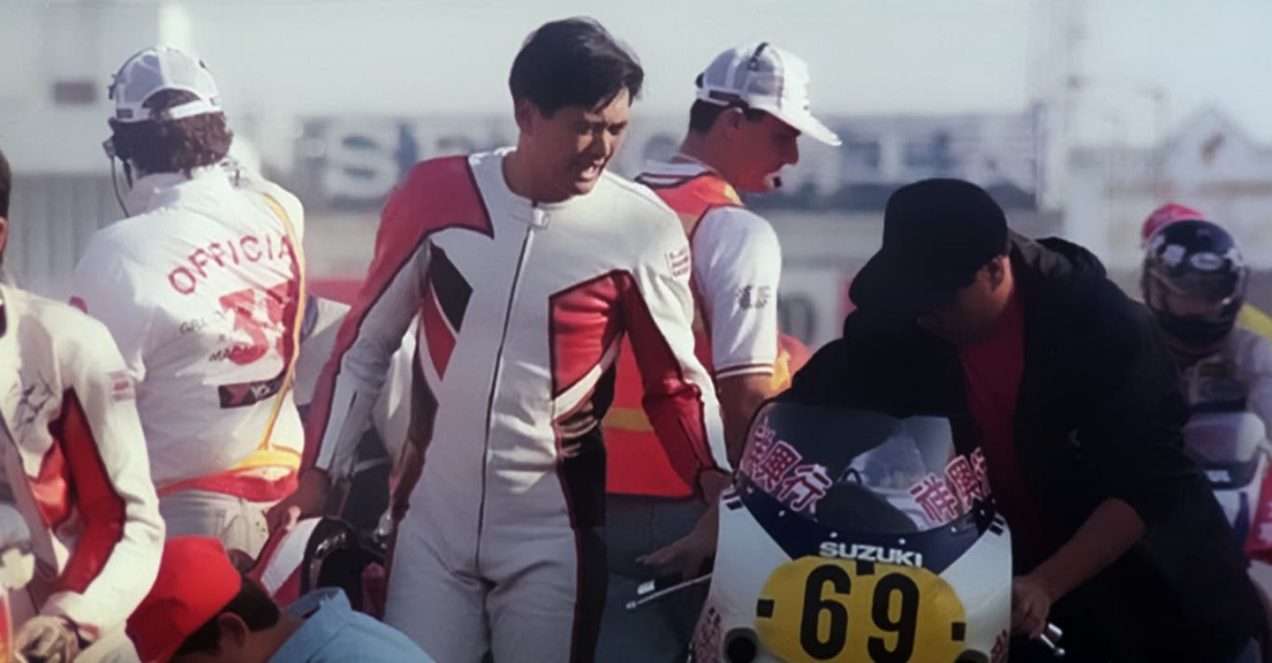 A classic Hong Kong drama, directed by Johnnie To and starring Chow Yun-fat and Sylvia Chang…

All About Ah-Long is a classic of modern Hong Kong cinema, which was originally released back in 1989, when it proved hugely popular with audiences and critics alike, winning Best Actor for a young Chow Yun-Fat at the Hong Kong Film Awards, who was then establishing himself as more of a serious leading man and dramatic actor. Chow also wrote the film along with his co-star Sylvia Chang, and it was an early effort from director Johnnie To, seeing him tackling heartfelt family drama rather than the explosive action and triad thrillers for which he would later become primarily known.

At the heart of the film is the relationship between the titular Ah-long (Chow Yun-fat) and his young son Porky (Wong Kwan-yuen), who live together in his rather squalid apartment in Hong Kong. Ah-long works on a construction site, having given up motorbike racing after crashing and injuring his leg. However, this doesn’t bring in much money, and so one day he sends Porky to audition for a role in a commercial, little knowing that the director is in fact Sylvia (acclaimed Taiwanese actress, director, producer and singer Sylvia Chang), his estranged girlfriend who he hasn’t seen for ten years since he was sent to jail and she went to the U.S. with her mother. Unbeknownst to her, Porky is actually her son, who she was told died at birth, and she finds herself having to come to terms not only with him, but with Ah-long, especially in the light of her impending return to the U.S.

Johnnie To’s direction is tight, and despite the fact that All About Ah-Long covers a lot of emotional ground and character development, the story progresses convincingly and smoothly. Similarly, although the central conceit, of a woman seemingly being unaware that she has a son, may seem somewhat far-fetched, it’s dealt with in a believable manner and without dwelling too much on who is to blame for the deception. Indeed, the film as a whole enjoys an air of realism, and as a result it is far more than either a melodramatic custody struggle or the simple tale of man’s quest for redemption. It’s frequently amusing, though not intrusively so, and this light-hearted approach works very well, helping both to endear the characters to the viewer and to make the proceedings engaging in a wonderfully entertaining fashion.

The main characters are all well drawn and given an uncommon level of depth, and To doesn’t shy away from showing their faults as well as merits, especially, and indeed crucially, in the case of Ah-long himself, who is shown in flashbacks to have previously been a genuinely nasty piece of work. As a result, the viewer genuinely cares for him, Sylvia and young Porky, and the film shows a heartfelt sense of honesty throughout which it is impossible not to be moved by. Although the plot does become somewhat predictable in its later stages, by this time the viewer has been drawn into the story and the fates of the characters to such an extent that this is barely noticeable and does not detract at all from its considerable impact.

All About Ah-Long is anchored by a marvellous performance from Chow Yun-fat, with his role here being completely different than his usual suave charmers, though he does have a few opportunities to flash his trademark charismatic grin. The actor shows his great versatility and emotional range, and the film serves as en excellent reminder that he is capable of far more than simply playing immaculately dressed rogues. Sylvia Chang is similarly impressive as the torn Sylvia, with a moving turn which ensures that the viewer never sides wholly with Ah-long, and for which she won a Best Actress nomination at the Hong Kong Film Awards, and young Wong Kwan-yuen also does well as Porky, in a role which garnered him several award nominations.

The film is firmly rooted in the eighties, from the bouncy synth music to Chow Yun-fat’s wild bouffant – it should be noted that his is by no means the most ridiculous coif on show, with that honour going to Sylvia’s assistant Peter, who sports a truly bizarre mullet. While this does date the film a bit, it also gives it a pleasantly nostalgic feel, though without being heavy handed.

This adds a sense of time and place to All About Ah-Long and again helps to ground its characters, further underlining the basic humanity which drives the story. Bolstered by fantastic performances and earnest direction from Johnnie To, it’s this depth which truly captivates the viewer, and which makes the film an entertaining and moving classic which should still be enjoyed by all viewers even thirty years later.