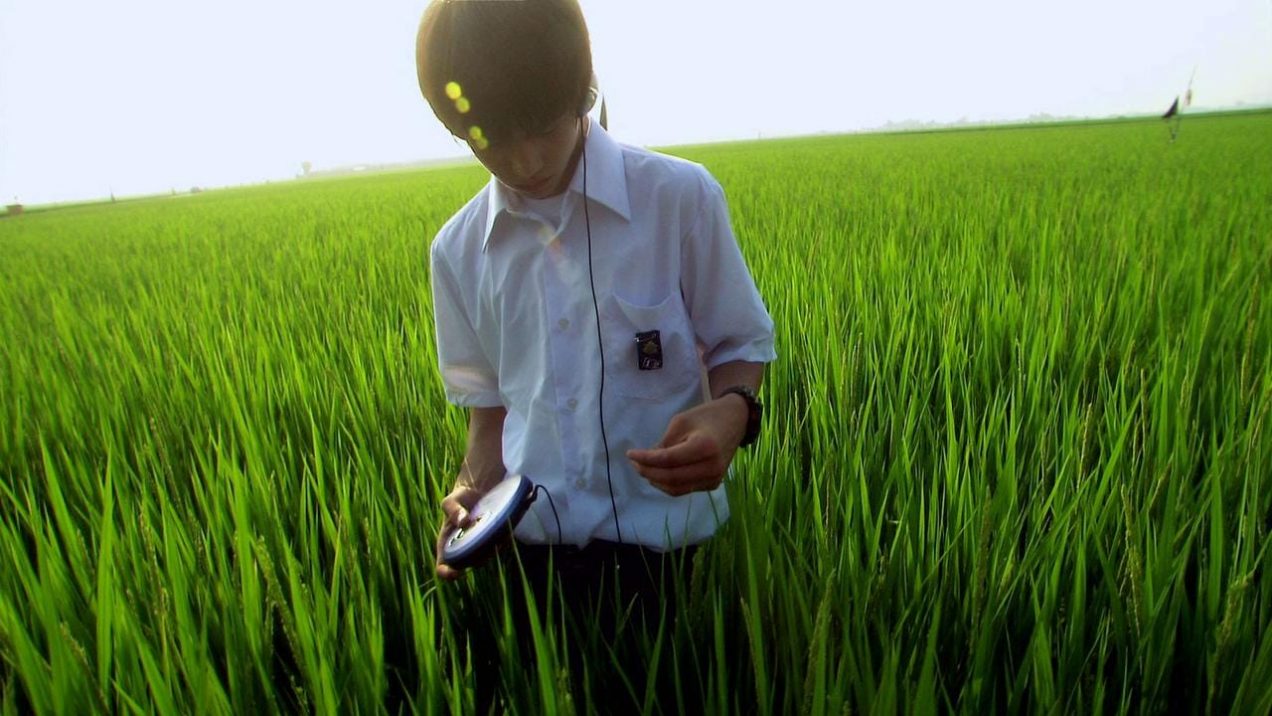 A brutal, bitter film that has excellent stylistic flair but can never quite raise itself to greatness…

We very rarely see the characters of All About Lily Chou-Chou using computers, or any technology beyond a shoddy camcorder; and yet one would struggle to say that it’s anything but a film about technology. From the very beginning, message board posts are overlaid with the action, the anonymity providing ambiguity, giving the characters completely different personae to when we see them in their physical form. It’s within these online conversations about the fictional singer Lily Chou-Chou that the film is the whimsical teen drama that I expected it to be, whilst in the real world it is harsh, brutal, and borderline unpleasant.

All About Lily Chou-Chou is, surprisingly enough, not all about the titular singer. It starts in media res, with Yuichi (Ichihara Hayato) standing in a windswept field, listening to Lily on his walkman. We eventually jump back to the beginning of the school year and see his blossoming friendship with the strong, silent Hoshino (Oshinari Shugo) and how a near death experience on a holiday to Okinawa changes the personality of the latter to be horrifically cruel and domineering.

Much like Lily’s own brand of light shoegaze that plays over a large part of the film, everything appears in a haze, with the plot being conveyed in snapshots of memory. This can make the timeline of the film confusing, but it’s an effective storytelling method. It feels almost as if the film is being told in a home video format, recreating the snapshots of memory that Yuichi has of this period.

That said, the film is the best part of two and a half hours, and over this lengthy duration then the haziness and hand camera work begin to outstay their welcome, and one begins to pine for some clarity in the narrative. The overlaid message board posts make the characters’ conflicted emotions clear, but the main action can occasionally feel like it lacks purpose.

This brings us to the point on which the entire film hangs: the characterisation of Hoshino and Yuichi. I thought that Yuichi was a brilliantly realised character; nuanced, relatable, believable. Yuichi could have been any one of us, believing so sincerely in the importance and sincerity of his own actions and thoughts that he is willing to block out the rest of the world. Ichihara puts in a fantastic performance as well, deftly capturing the innocence of youth.

Hoshino could have been a far better character if there were any real hint given to why he behaves in the way he does. It is attributed to divorce, but that is not an interesting part of the story and very easy to forget that it happens. One could say that he becomes so manipulative in an act of revenge as he was bullied in his elementary years. The problem with all of these theories is that they simply do not engage the viewer and don’t aid the narrative at all. The only thing that does is the fact that he becomes such an unpleasant character, but that doesn’t leave the viewer any less wanting for answers.

The change in Hoshino’s character is directly related to the very dark tone that the film takes. We see glimpses of it earlier on: a boy is forced to masturbate by Hoshino’s gang whilst they all look on, but nothing can prepare the viewer for the later atrocities in the film. Maybe I would have reacted differently if I had expected the film to be as dark as it was, but the drama surrounding the character of Kuno in particular was something I found to be deeply distressing. She is the class whipping post, and ultimately falls victim to the events of a scene which shows the zenith of Hoshino’s manipulative nature.

In some ways I am glad that I was so shocked; any film that can provoke an extreme reaction must be doing something right, or at the very least doing something interesting. However the tone of the film spirals into something so unpleasant that it did become something that I wasn’t pleased to be watching, I wasn’t feeling enriched by this experience. Luckily it was limited to a few isolated scenes, but Hoshino was elevated to be a figure of such awfulness that not only did the film go overboard with its emotions, but he began to feel more like a caricature than an actual bully.

At the core of the film’s emotional drama, however, everything is forgiven due to the brilliant stylistic choices made by director Shunji Iwai (Love Letter, Swallowtail Butterfly). I have already mentioned the overlaid message board posts, but am yet to mention how they ground the film, justify the ambiguity, and provide some much-needed heart.

We see various anonymous monikers posting on a fansite for Lily Chou-Chou, every message being followed by such nicknames as ‘bear’, ‘blue cat’, or ‘philia’. They discuss how Lily represents ‘the aether’, a quality simply not held by other musicians. Whilst we understand fairly early on that Yuichi and Hoshino are contributors to this site, it is not explicitly stated which of the posters they go by, or if they are any of the regular posters at all.

This is a fantastically innovative method at showing the emotional drama that would otherwise have remained far too implicit to infer. We also come to be able to build a portrait of Lily in our own minds, and seeing the level at which she is adored by these hardcore fans once again shows the innocent joys of youthful obsession. Even though I find this to be a deeply flawed film, the message board posts is one of the most stunningly inventive stylistic choices I have seen in any film for a very long time indeed.

Ultimately, Lily Chou-Chou is too long, too unwieldy, too strangely dark for me to love it. The characters could definitely stand to be stronger and the performances, whilst fine, are hardly anything to write home about. I adore lots of its stylistic choices, though the handheld camera can get to be slightly annoying by the end. It’s a valiant effort to create a different type of teen film, but it fails to consistently hit the mark.

All About Lily Chou-Chou screens as part of the New York Asian Film Festival 2016 (NYAFF), with Shunji Iwai’s latest film A Bride for Rip Van Winkle. Read all our reviews and coverage of #NYAFF2016.

One thought on “All About Lily Chou-Chou”