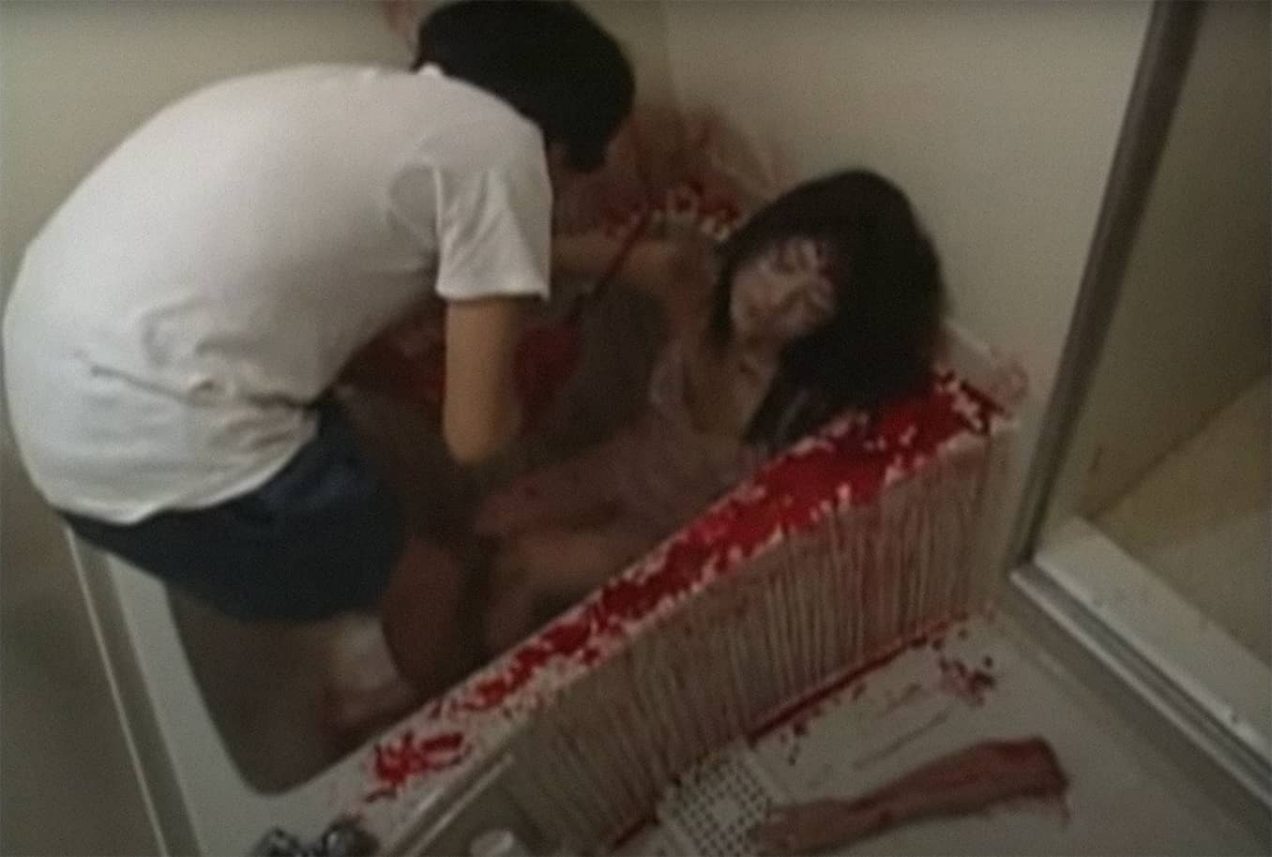 Katsuya Matsumura moves away from revenge for the third in the series, and into even nastier territory…

Following in the fine tradition of many other horror franchises, the third instalment of Katsuya Matsumura’s All Night Long arrived in 1996 claiming to be The Final Chapter – needless to say, after a break of a few years, Katsuya was up to his old tricks again in 2002 with All Night Long R, and then again with further entries in 2003 and 2009. To be fair, the film does feel like the last part of a trilogy of sorts, in that it brings the nihilism and themes of abuse and of human beings as garbage of its predecessors to a logical, and even more extreme conclusion, and fans of the series are unlikely to feel particularly short-changed by its later continuation.

The film follows creepy protagonist Kikuo (played by Yuji Kitagawa, who also featured in Katsuya’s charmingly, though not inaccurately-titled Concrete-Encased High School Girl Murder Case: Broken Seventeen-Year-Olds), a young loner who works in a seedy love hotel cleaning up after customers and who spends his spare time either spying on people or lurking at home with his computer and carnivorous plants. Becoming obsessed with a woman who works in a nearby convenience store, he starts to stalk her, going through her trash and finding out everything he can about her and her life. After witnessing his colleagues attack and abuse a high school girl, her brings her back to his apartment and keeps her prisoner, at first practising measuring different bodily dimensions before moving into torture and worse, skills which come in handy when he inevitably snaps and goes on a murderous rampage.

Viewers already familiar with the All Night Long series should have a pretty good idea what to expect, though whereas the first two instalments had more arthouse and philosophical leanings, The Final Chapter doubles down on the squalor and nastiness, and is probably more the kind of far-out exploitation that extreme genre fans might be hoping for. There’s certainly more torture and sadism on screen here, and despite the shot-on-video budget limitations, Katsuya manages to work in some nauseatingly effective makeup and gore. With scenes of sexual assault thrown in, and with pretty much every character being an abuser of one sort or another, the film does go to some very unpleasant places, and at times verges on Red Room territory, all shot in the director’s usual slow-paced, minimalist, matter of fact style.

While some films pride themselves on following outsiders living on the fringes of society in some kind of romantic rebellion, the protagonist of The Final Chapter quite literally lives surrounded by human waste, whether it be the bodily fluids and used condoms he cleans up at work or the trash bags he rifles through searching for used sanitary pads and other choice items belonging to his target. Even aside from the gore and torture the film is pretty hard to stomach at times, and there are few other productions that show such dedication to depravity and degradation, with most of the running time being spent reducing human beings either to trash, known only by what they throw away, or the sinister data which the protagonists collects.

As with the other films in the series, the horror here arguably comes mainly from the all-pervading bleakness and nihilistic hopelessness, and Katsuya’s depiction of a society whose sole function seems to be to create and facilitate monstrous behaviour. Although it roughly follows the same structure, in The Final Chapter it’s not so much revenge which triggers the last act rampage, and more just anger and disgust, and there’s nothing even approaching catharsis or a traditional character arc. While in previous instalments there was at least some sympathy for the protagonists before they go over the edge, here Kikuo is a bizarre, mumbling maniac, with there being no attempt to humanise him or to give the viewer any choice other than to simply watch him as he stalks and works his way up to murder, the film existing in a complete moral void and having an icky feeling of voyeurism throughout.

All Night Long 3: The Final Chapter is definitely the kind of film viewers will want to take a shower after watching, and is only one for those keen to plumb the depths. Though other films might be a little more extreme in terms of gore and graphic mayhem, few manage the same level of depressing dread – for better or worse.