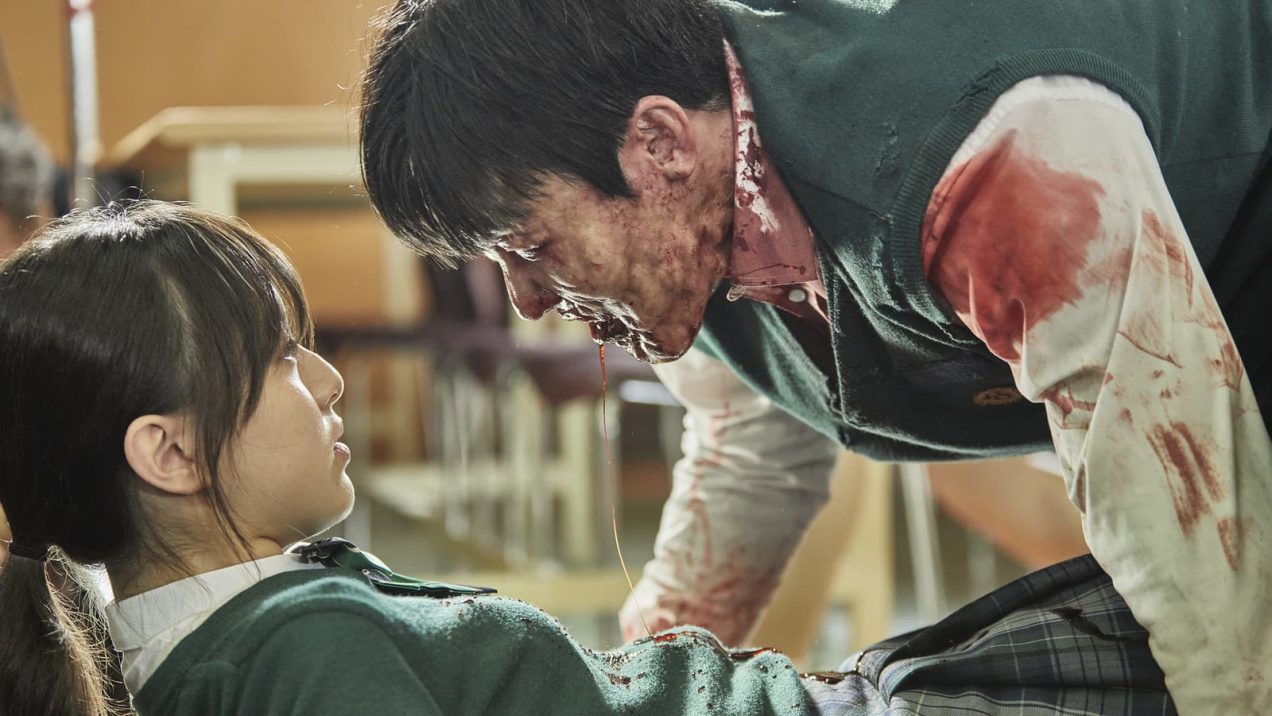 With the new year comes another Korean Netflix series that’s topping the viewing charts around the world in the form of the high school zombie thriller All of Us are Dead. Based upon the popular webtoon Now at Our School by Joo Dong-geun, the series is equal parts survival horror and teen melodrama, with a huge cast of youngsters trying to avoid being eaten while dealing with bullying and unrequited crushes. Following in the footsteps of Squid Game, Hellbound and other recent Korean Netflix shows, the series has already proven a massive mainstream success since its launch at the end of January, and looks set to join the ranks of the streaming platforms biggest hits.

The story mostly takes place in Hyosan High School, where a zombie infection suddenly begins to spread like wildfire, seemingly connected to science teacher Lee (Kim Byung-chul, R-Point), whose son was viciously attacked by bullies. Most of the students and staff are quickly overcome, leaving a small group of survivors trying to figure out how to stay alive and escape from the undead horde, including childhood friends On-jo (Park Ji-hoo, House of Hummingbird) and Cheong-san (Yoon Chan-young, Mourning Grave), who may or may not be harbouring romantic feelings for each other, aloof class president Nam-ra (Cho Yi-hyun, Metamorphosis) and former bad boy Su-hyeok (Park Solomon, Horror Stories 3). Against this backdrop the virus begins to spread outside the school, with the military seizing control and On-yo’s fire rescue father doing his best to come and save her.

As a zombie thriller, All of Us are Dead gets a lot right, taking a similar approach to Train to Busan in terms of its mix of sprinting ghouls and teary drama – the two seem very much like they could be taking place in the same world, with the film being the subject of a few throwaway meta-references. There’s certainly lots of horror action, with every episode featuring buckets of blood and gore and being structured around exciting set pieces, and with the series notching up the tension as the situation becomes increasingly desperate and as it expands outside the school and onto a bigger battlefield. Although it doesn’t really add anything new to the usual zombie virus formula, the series does make a few interesting attempts to try something a little new, if only to sustain its length, and shows a good sense of what makes the genre work. Matters are helped by solid performances from the generally likeable young cast, and though Park Ji-hoo and Cho Yi-hyun impress the most, there are a few scene-stealing supporting players scattered throughout, including Lee Yoo-mi, who plays a very different character to her Squid Game fan favourite.

Though all of this makes All of Us are Dead an entertaining watch, it does suffer from being overlong in comparison to other Korean Netflix series, clocking in at 12 episodes, many of which are over the hour mark. It’s hard not to feel like 8 episodes might have been better, especially since most follow the same pattern of students running from zombie danger, then finding a classroom to hide in and play out some melodramatic shenanigans before something happens to push the plot forwards towards a cliff-hanger. The pacing in general is variable, the series suffering from a slump around the middle, and this does detract from its intensity as a survival thriller, especially for viewers not so keen on teen love triangles.

On this score, there really isn’t much to the characters, who are very quickly established as a bunch of K-drama and high school romance archetypes, with most of their dramas and relationship struggles being generic and clichéd – the series does lean a lot more heavily into this side of things than the likes of Squid Game and Hellbound. This isn’t particularly bolstered by much in the way of social commentary, and though the series does deal with inequality and bullying, this is increasingly side-lined in favour of tearful love confessions and students crying at length about this and that, another way in which it recalls Train to Busan, and its later stages in particular.

All of Us are Dead also suffers from spreading itself rather thin across its large cast, especially when it does expand its scope outside the school, with some subplots not really adding much, and it’s quite likely that viewers will end up forgetting some minor characters when they disappear for a couple of episodes, especially when they’re not connected to the main plot. With the series not really going for the Battle Royale approach of cruelly culling the student body it does get a bit muddled in places, and this again suggests that a more streamlined length would have been better.

Still, while All of Us are Dead might not make for as compulsive viewing as some of its Netflix peers, there’s nevertheless lots to enjoy here, if perhaps not to binge in one or two sittings. It’s great to see another full-blooded genre series making a gory splash, and even viewers who would normally steer clear of K-drama style teen romance should be entertained by its mix, even if they do find themselves groaning in places.

All of Us Are Dead is streaming now on Netflix. Join us every Thursday for the latest in James’ #cineXtremes series.