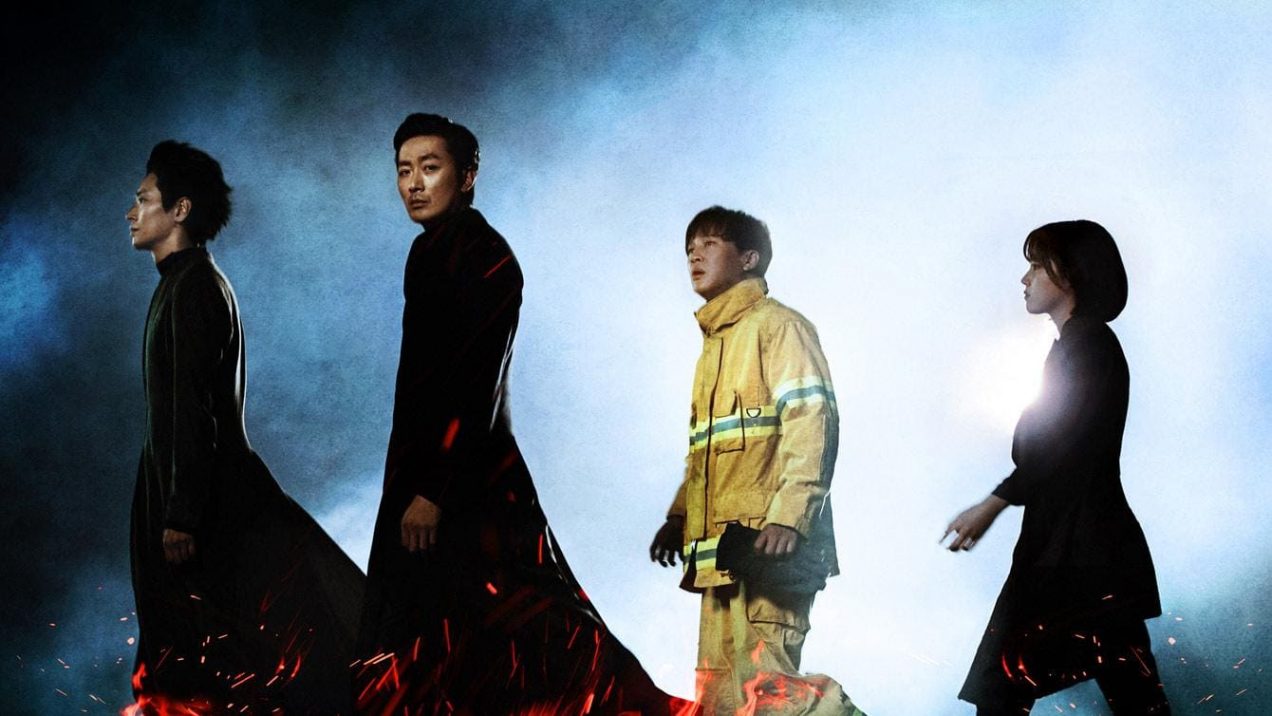 Three grim reapers help a firefighter navigate his way to the afterlife, in one of the biggest Korean films ever…

Filmed back-to-back with its sequel The Last 49 Days, Along With The Gods: The Two Worlds marks the return of director Kim Yong-hwa after his popular films 200 Pounds Beauty and Mr. Go. Featuring a well-known cast that includes Ha Jung-woo (The Handmaiden), Cha Tae-hyun (My Sassy Girl), Ju Ji-hoon (Confession) and Kim Hyang-gi (A Werewolf Boy), this big-budget extravaganza mixed the familiar motif of afterlife recollections with CG superhero action, becoming one of the biggest box office hits in Korean history. Even before the much-awaited sequel hit screens, two more were announced in June 2018, proving this is one franchise that has legs – more than you can say for some superhero universes.

The brave death of firefighter Kim Ja-hong (Cha Tae-hyun) saving a child makes him a ‘paragon’, fast-tracking him to prove his worth to reincarnate in 49 days through 7 trials in hell. His appointed grim reapers Gang-rim (Ha Jung-woo), Haewonmak (Ju Ji-hoon) and Lee Deok-choon (Kim Hyang-gi) defend him through this fantastical world to face his final judgement. Meanwhile, a family member dies leaving a vengeful spirit that threatens to turn both their world and ours…

There’s something of a cinematic tradition for the end (or near-end) -of-life reminisces of those looking back on milestones and major events, often with regret for what they became or could have been, and often led by a guardian. It started with the first adaption of Dickens’ A Christmas Carol, which at least goes back to Walter R. Booth’s Scrooge, or, Marley’s Ghost (from 1901, since you ask). Ernst Lubitsch’s Heaven Can Wait and Frank Capra’s It’s a Wonderful Life put a heavenly connection on the proceedings. But it was Powell and Pressburger’s A Matter of Life and Death, ostensibly a propaganda film to improve Anglo-American relations following World War Two, that gave the ‘Other World’ a visually spectacular design well beyond the expected pearly gates. Even if it didn’t want to refer to it by name.

Kim Yong-hwa’s epic CG-heavy vision of this other world easily draws on this idea, as it does the central notion of a man facing trial to win the right to life (or in this case reincarnation). Kim’s own Dexter Studios has led the way in using these special effects, his last film Mr. Go bringing a baseball bat-swinging gorilla to life. Along With The Gods is far more ambitious though. The effects are decent if not mind-blowing, sometimes objects seem too flat. It’s hardly the equal of effects in the Marvel Universe, though to be fair the budget is not even modest by Hollywood standards, and not much worse than that of rivals DC. That these reapers possess superhero-like powers is deliberate; the series is based on a webtoon by Joo Ho-min. Haewonmak even makes the rather meta reference: “Wow, Korean firefighters should join The Avengers!” If it’s meant as a calling card for his company’s services, then it’s pretty impressive.

These action sequences lift the film from the melodrama at the root of almost every Korean box office success or recent years. We see Ja-hong’s with hardships with his ill and mute mother, his deaerating relationship with brother, conscripted into Korea’s compulsory military service. But are we ever in doubt of Ja-hong’s worthiness? In the opening shot, we see his bravery, and, by dent of being a firefighter, he’s easily worthier than most of us. It’s something of an uphill struggle to make us believe he could have done anything that would mean he doesn’t achieve his goal of reincarnation, and one the film fails at, mainly because the filmmakers don’t want to show us anything too extreme. Where is the peril? The nearest we get are some Bosch-ian visions of those stuck in the variously themed hells, held safely at a distance. Instead, the film falls into a loop: at each trial showing us something that risks his position, and then that he has very good reasons for doing it. Then reset. It’s at this point the film desperately needs the subplot about the vengeance spirit in our world to propel the film along.

Established cinematographer, and one-time director in his own right, Kim Byung-seo (Cold Eyes) gives the proceedings a sheen that a glossy, big-budget Hollywood film would proud of, but much like the majority of superhero films ‘light’ is the operative word here. Unlike those earlier films of Lubitsch and Capra, there’s no personal journey of self-discovery to be made here for our lead protagonist. We learn nothing more about him or ourselves, everything is played for immediate, one-dimensional effect. And however much gravitas the casting of actors like Ha Jung-woo, or even that of Lee Jung-jae (Assassination) in his fleeting role as the ruler of the underworld, Yeomra, may give to their roles, there’s little for them to get their teeth into. Even the spirituality of the Confucian-tinged Buddhist afterlife is given the lightest of touches. It’s only military service, following a scene reminiscent of Park Chan-wook’s Joint Security Area (JSA), that receives any bite – suggesting (and not for the first time by any means!) that not everyone is suitable for conscription.

It’s hard to work out quite why this struck such a chord with Korean audiences – perhaps it’s little more than the mix of maudlin, fantasy and action meant it could work with both male and female audiences of all ages. Unlike many of the two-part films, the film is reasonably complete in itself, with little more a teaser of what’s to come in the sequel. And that looks set to replicate The Two World’s success, but if the mooted follow-ups are going to keep audiences coming back, they’ll need to add more complicated subplots rather than the same, already repetitive, model.

Along With The Gods: The Two Worlds is available on US Blu-ray and DVD via Well Go USA, and available to stream on Amazon Prime (USA).

Along With The Gods: The Last 49 Days is currently on release.