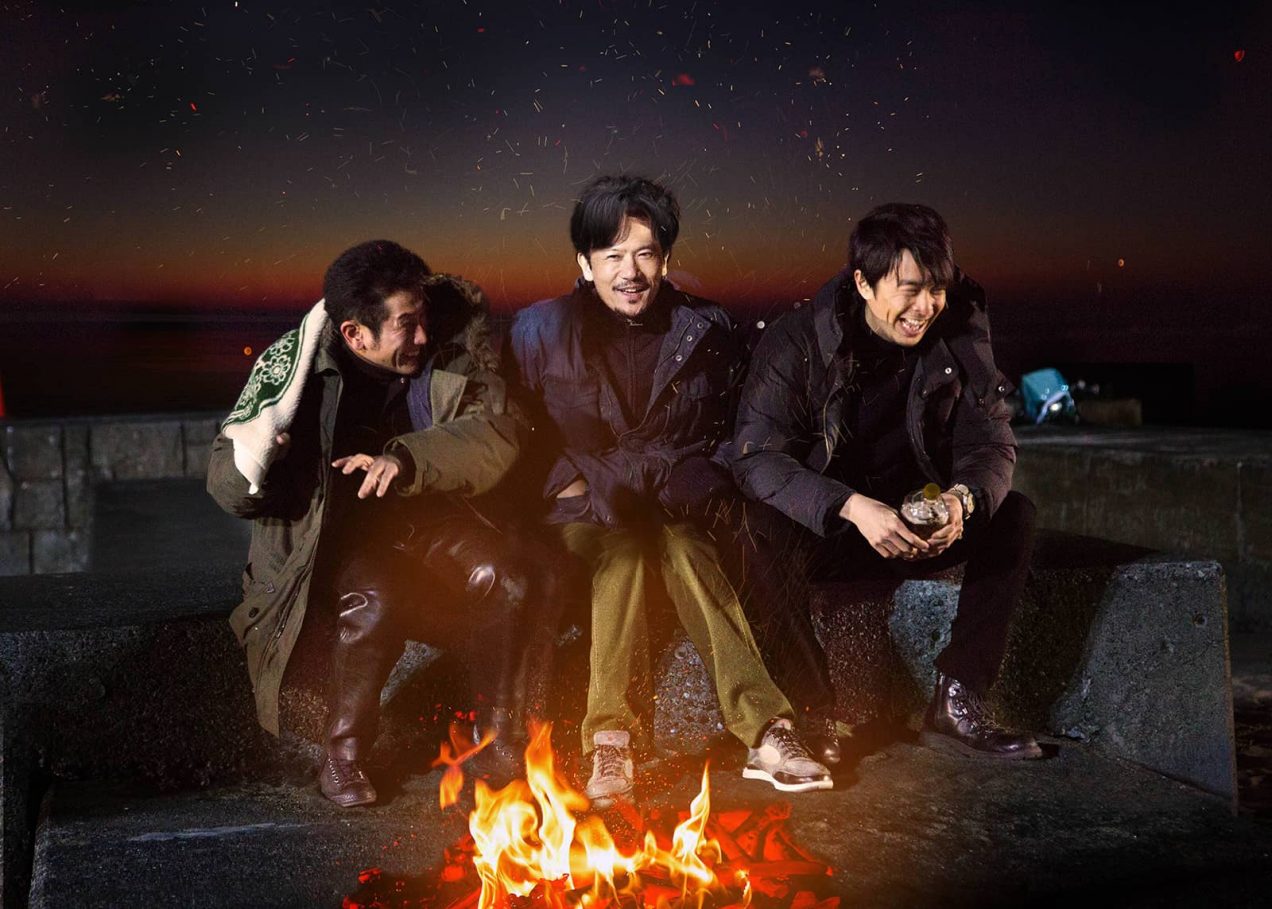 A beautifully layered exploration of the problematic nature of relationships…

While Sakamoto Junji is not an unknown name in Japanese cinema, he has not had the international appeal as some of his contemporaries. Within Japan, various narratives (Face (2001), Someday (2011), Chorus of Angels (2012)) within his oeuvre did not fail to earn prizes at prestigious festivals. His last narrative, Another World is not different, earning the Audience Award at last year’s Tokyo International Film Festival.

One day, when Hiroshi (Goro Inagaki) is driving through town, he recognizes a passing backpacker as his former friend Eisuke Okiyama (Hiroki Hasegawa), who has suddenly returned to his birthplace after eight years living in Hokkaido. While Eisuke and Mitsuhiko (Kiyohiko Shibukawa), owner of Iwai Car Sales, immediately celebrate his return and help him get settled in his parental home, they quickly realize Eisuke, a former Self-defense Force official, is nothing like his former self.

Beyond Hiroshi Takamura’s struggle with the financial side of his company Takamura Charcoal makers, his family-life is filled with subtle conflict. Can Hiroshi turn his company into more profit and become a better husband for Hatsuno (Chizuru Ikewaki) and a true father for Akira (Rairu Sugita)?

Another World should be read as a slow dramatic human portrait of two subjects, Hiroshi and Eisuke, who despite their particular injury, re-find in each other – however fleeting it may be – the friend they used to be. When Keisuke returns to his hometown, his return is shrouded in mystery. But even if the reason for his return in clouded, the aspect that something problematic marks/guides his subjectivity does not fail to shines through the clouds of mystery. This is made evident by his Eisuke’s distant behaviour and his subtle acceptance of being talked about instead of forcing for himself a position through speech. In other words, Eisuke’s distant behaviour reveals a constraint to manifest himself as desiring subject.

There are, of course, moments in the narrative where Eisuke reveals some of his subjective history – evocative fragments vaguely approaching the trauma’s that lead to his inability to realize himself as the subject. One is quickly led to realize that his past as self-defence force official has had a causal role in his current subjective retreat. Without revealing too much, we can say that the evocative revelation of the real that marks Keisuke’s subjectivity – a real not unrelated to his guilt – subtly criticizes the lack of mental support for those who served their time as a soldier.

It is only through the act of getting drunk that Eisuke is able to enter the lives of his former friends.  While a connection is established, Eisuke subtle evades talking about his own subjective position as self-defence force official – his funny narratives bear, in truth, no relation to his position as subject. Nevertheless, due to this moment of drinking – an acceptance to socialize more -and his acceptance to aid Hiroshi in his factory, the possibility for an inter-subjective encounter between Eisuke and Hiroshi is opened up.

The focus on relational dynamics in Another World is not only underlined by the focus on the relationship between Eisuke and Hiroshi, but also because of the narrative focus on Hiroshi’s position within his family and the inner dynamics of his family as such – the struggles caused by the financial strain on the family, Hiroshi’s subtle refusal to include his wife in his decision-making, and the rumour concerning Akira. In this context, it is necessary to highlight the fact that Hiroshi, ever overdoing his best for his small struggling company, fails in his position as a husband – a failure revealed through his refusal to accept his wife’s help or to take her concerns seriously. The couple might be communicating but they do not hear what each other is saying. Hiroshi also fails as a father, as he is unable to listen to what his son Akira is showing/saying.

While it is only by way of intermingling different focal points (Mitsuhiko, Hiroshi, Eisuke, Hatsuno and Akira) – focal points always relational in nature – that the narrative evokes something of the community, it is also true that this intermingling circles out Hiroshi’s position of failure, Eisuke’s re-integration in the social dimension – the re-finding of a place within the community, and the forming of a new bond between Hiroshi and Eisuke as the central nodal points of the narrative’s unfolding. In other words, it is only by forming a social bond that Eisuke and Hiroshi are able to attain a minimal change at the level of their subjective position.

What makes Another World engaging is the naturalistic way – sketching subtle and minor relational changes –  by which the subject-matter is approached. The drama in Another World is ever born from the natural and realistic interactions between the various characters. There is, in other words, no recourse to cinematographically techniques to empower the drama in the narrative – the drama is solely carried by the actors/actresses. The fact that the human drama, relational as well as a psychological drama, is so sincerely felt only highlights the strong acting performances of the entire main cast – Chizuru Ikewaki’s powerful performance does warrant a special mention.

The cinematography of Another World, courtesy of Shingo Gima, consists of a blend between fixity and mostly subtle movement – following movement as well as wandering spatial movement. This blend is not only found in the concatenation of shots but also in the shots as such – shots thus blending subtle movement with moments of fixity. Only, in rare instances, like the framing of a fight or the framing of the reality of fishing, fluidity is exchanged for a more cruder movement and fixity for framing marked by a slight tremble.

The visual concatenation supporting the unfolding the drama of human relations and a look at the Japanese tradition of charcoal making is furthermore subtly decorated with direct and indirect views of Japan’s beautiful coastal nature.  While these shots of nature place the narrative within the context of a small village in Mie prefecture, their beauty goes beyond a mere contextualization of the narrative, acting as a sort of peaceful background for the subtle struggles of the speaking beings.

While music is mostly applied between dramatic moments – moments of more worldly relational drama, there are some scenes where music – most often strings but in one instance drums – comes to support the narrative moment. One such scene is the scene evocatively revealing Eisuke’s subjective truth, a scene supported by a piece of drumming marked by a lingering danger. Beyond the importance of the acting-performance for framing each dramatic moment, the latter scene reveals that music is only applied when the narrative focuses on Eisuke’s subjective drama – the drama of another world – or aims to highlight the subtly change that Hiroshi as subject underwent.

Another World, as a narrative, neither ends in completely sadness or fulfilling hope. But while subtle hopeful moments and moments of sadness and conflict create a natural narrative rhythm – a leisurely exploration of relationships, its sincere humanist message – everyone is marked by the traumatic real – is not able to truly reverberate in a moving way. Sakamoto may be able to touch upon the importance of inter-subjective relations and the importance of finding a place for oneself in the social fabric, the two moments of disruption, the two defining moments of Another world, are not strong enough to make the narrative’s message touch the spectator. Despite our criticism, Another World should still be considered as a beautifully layered exploration of the problematic nature of relationships – be it due to trauma or due to a subjective oath.

Another World screens as part of the Japan Foundation Touring Film Programme 2020 beginning at ICA London from 31st January, before touring other venues around the UK. For more information on all films screening, visit the official website.