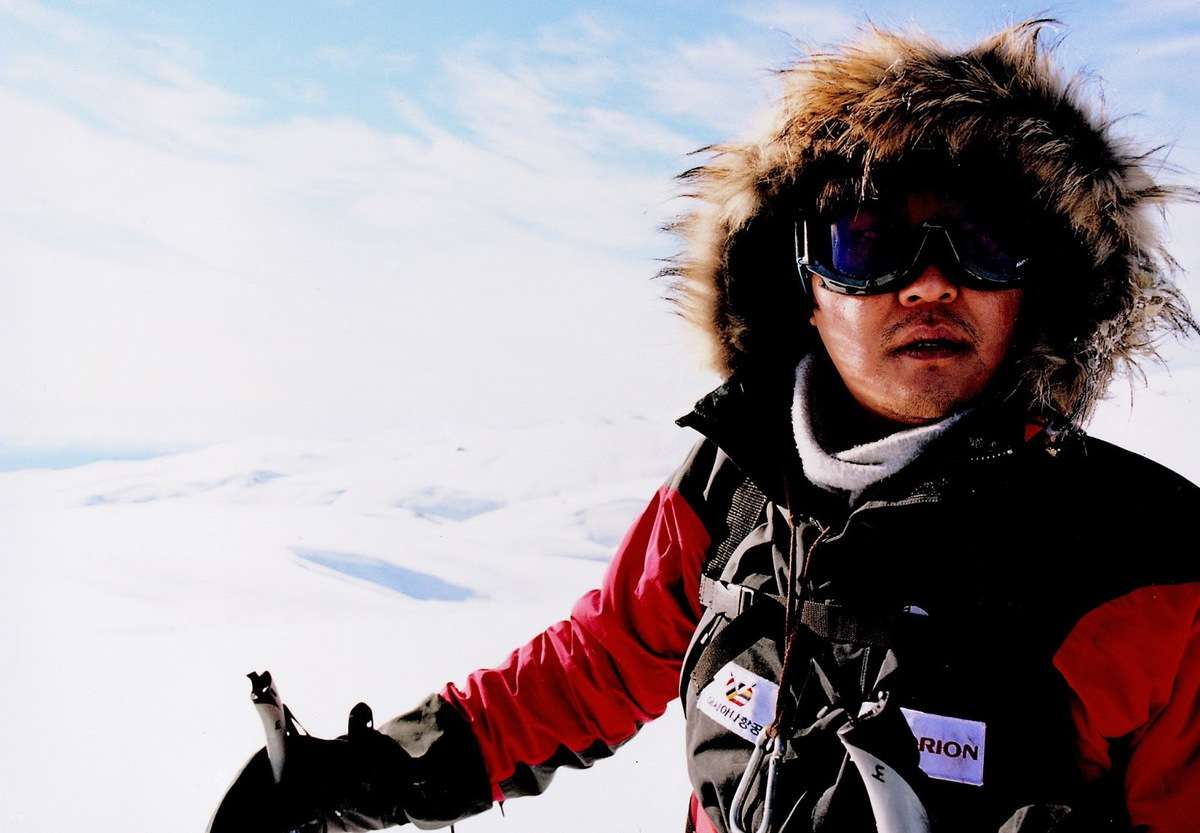 The 2005 South Korean production Antarctic Journal apparently took five years to complete, a fact which suggests that debut writer-director Yim Pil-sung was possessed of the same dogged determination and endurance as his characters. The film is difficult to categorise, being equal parts supernatural mystery, psychological tease and survival thriller, which is certainly no bad thing, representing a departure from usual ghost stories and tales of vengeful female spirits that dominated the Korean genre at the time. Much talked-about on its original release due to its production values and high budget, Antarctic Journal unfortunately failed to make an impact at the box office, though should still be of interest to Korean film fans today due to the presence of star Song Kang-ho and the fact that it was co-written by Bong Joon-ho.

The plot follows a six-man Korean expedition to reach the ‘Pole of Inaccessibility’ (referred to throughout as the P.O.I.) in a remote region of the Antarctic, a feat only matched previously by one other team. As well as the elements, time is against them, with just 60 days until the sun goes down for six months, a fact which puts considerable pressure on their already none too stable captain, Choi Do-hyeong (Song Kang-ho). Misfortune befalls the men in a variety of forms, from bad weather and communication difficulties to unexplained illness, despite the fact that as the script reminds us on multiple occasions, no virus can reportedly survive in Antarctica. Part-way into the trek, Kim Min-jae (Yoo Ji-tae), the youngest member of the team, finds an old journal which apparently belonged to a British expedition from 80 years back, and which seems to relate them having experienced the same strange problems. From this point, things only get worse, the tension between the men turning into paranoia and violence, and with time running out, their chances of surviving, let alone finishing their mission start to look slim.

It quickly becomes apparent that the main flaw of Antarctic Journal is that it moves far too slowly, with director Yim Pil-sung relying far too much upon an ominous atmosphere and minor enigmatic accidents – while this in itself need not be a problem, the film consistently fails to actually deliver upon any of its vague menace. The first hour or so consists mainly of the men trudging across the unchanging scenery, pausing to argue every once in a while, with hints of unease coming through odd camera angles and scenes of characters staring inexplicably at the ground for long periods of time. Although things certainly pick up in the second half, with snow storms, mental breakdowns and some gruesome amateur surgery, the damage has already been done, and the film as a whole has an unavoidable feeling of listlessness. Given the talent behind the camera this is a bit of a surprise, with Yim not managing the inventiveness he would show in his 2007 take on Hansel and Gretel, and with Bong Joon-ho’s script having little in the way of his usual genre-bending creativity.

Matters are not helped by the fact that none of the characters are particularly well-developed, being burdened with mundane motivations, none of which convincingly explain why they continue with such an obviously doomed quest. Without anyone to sympathise with, and with no central villain save the snow, the viewer feels lost, and the film becomes a fair slog in places. To be fair, this isn’t really the fault of the cast, with Song Kang-ho and Yoo Ji-tae both doing their best in what were doubtless tough conditions, and with neither of them having much to work with.

The film is undeniably handsome, with New Zealand standing in perfectly for the bleak Antarctic wastes, aided by the odd bit of computer enhancement. Yim directs with a steely gaze, favouring long, static shots over fast editing, and he gives the film a feeling of real isolation reminiscent at times of early John Carpenter. This does make for occasionally tense viewing, and gives the landscape a malevolent, threatening character of its own. There are a few good shocks, mostly of the creeping dread variety, rather than out and out horror, though sadly these are undermined by the fact that the viewer soon gets used to the film’s stubborn refusal to really deliver the genre goods.

Whilst by no means a bad film, Antarctic Journal is nevertheless a disappointment, as with tighter editing and more in-depth character development, it could have been an effective story of bravery and dangerous obsession. As it stands, it’s a film which is likely to try the viewer’s patience, taking a long time to get anywhere, and offering only mild chills when it finally does.