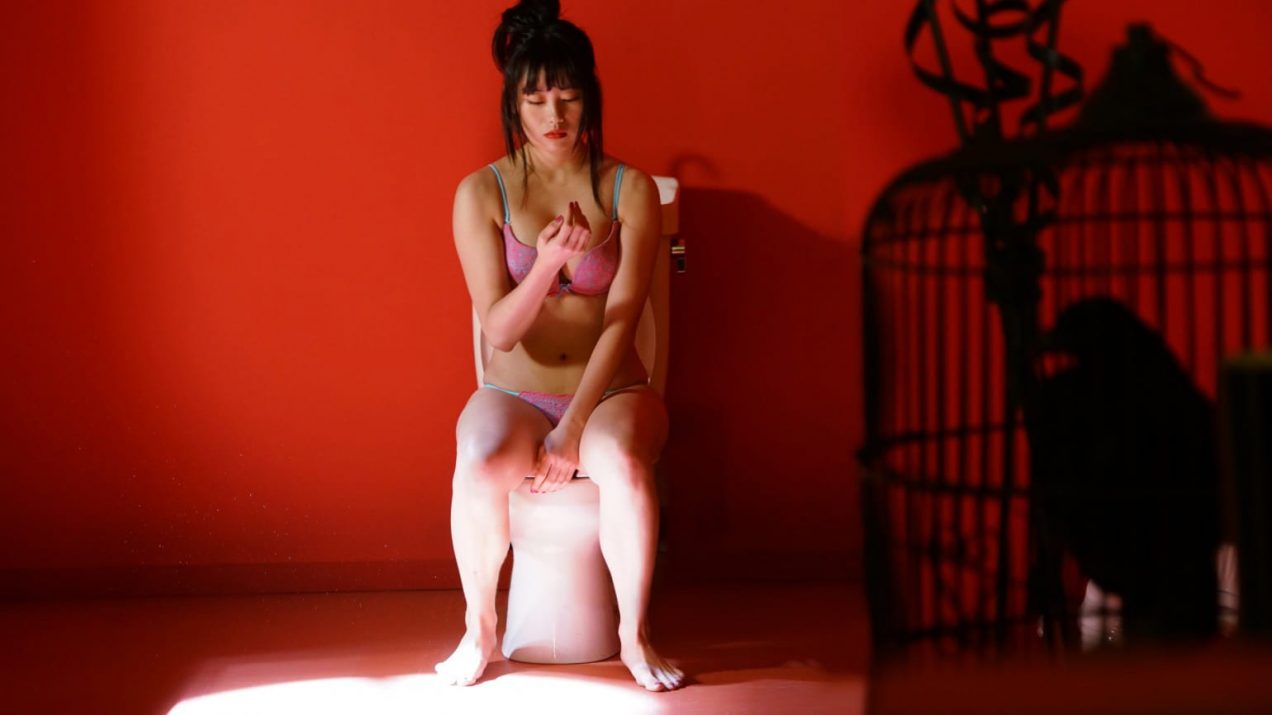 Sion Sono is back with another small tale that packs a big punch for feminism. Seriously!…

Whenever you hear of the director Sion Sono, you expect a little controversy, a little surrealism and something a little extreme. And with films like Love Exposure, Suicide Club and Strange Circus to name a few, he has earned the reputation of being a maverick director. But in some of his recent work, he has gotten onto themes which are surprisingly in contrast to his earlier work. Much like in the schoolgirl horror/fantasy Tag, he delves into themes which reflect the faults in present Japanese society. And in his latest film, Anti-Porno, Sono does it again with spectacular results. As part of the five-film saga of the Roman Porno Reboot, Sono certainly makes his mark.

Former gravure idol Ami Tomite stars as Kyoko, a talented young artist and author whose life is in disarray due to her troubled past like the sudden death of her sister and the depraved relation between her parents. Taking inspirations from her life and using it for her novel, she becomes the woman that she is today. Trudging through her day-to-day life of interviews, magazine shoots and creative outlets, she has a dangerously sadistic relationship with her personal assistant, Noriko (Mariko Tsutsui). That is until one day, her life (as well as the story) turns upside-down to the point where the audience will have to re-evaluate what had just happened.

As with all of Sono’s films, the less you know about the story, the better. And Anti-Porno has many surprises and tropes that Sono is capable of pulling off. Like in Tag, Anti-Porno deals with female oppression and objectivity and it is just as sharp. Sono toys with actions that the characters make, which can be seen as exploitative as well as prurient but in retrospect as well as in the final act of the film, it all coalesces to a point and it is a marvel to witness.

The cinematography and production design by Maki Ito and Takashi Matsuzuka is fantastic to look at and really blurs the line between fantasy and reality with ease. Sono again utilizes classical music from Beethoven to great effect, but it can get a little repetitive, while the editing by Junichi Ito keeps the film clear and concise, especially for the film’s short running time.

Sono’s storytelling in Anti-Porno also feels like a greatest hits compilation at times, with many elements picked from Himizu (the use of paint), the fascination of the oppression femininity (Tag and Guilty of Romance), psycho-sexual horror (Strange Circus), but Sono does one-up the story in one extreme way and it makes all the difference (without spoilers): he goes meta. Not only does it add some much-needed humour (like in a hilariously dark and depraved dinner scene), it also adds a lot of punch to the exploration of its themes, showing what it feels to be looked down on and having warped perceptions about the down-and-out facts of life.

The actors (or mainly two) certainly follow Sono all the way. Having worked with Sono in small roles like in Tag and The Virgin Psychics, Ami Tomite takes the leading role in Anti-Porno and she delivers a whirlwind of a performance. Seemingly one-dimensional in the first act (basically acting hysterical), as the story turns itself on its head, her performance becomes a lot more layered as her character deals with sorrow, desperation and guilt, and Tomite delivers in spades.

Veteran actress Mariko Tsutsui (who has appeared in Sono’s The Land of Hope) also delivers in a similar way, playing her role as one-dimensional (in this case, submissive) to the point where she becomes a force of nature that took me by surprise. The supporting cast are all fine in their performances but the acting highlights are mostly from Tomite and Tsutsui.

As for its flaws, the film does indulge in actions that can turn off the audiences, particularly those who are politically correct. Also, the first act does drag a little bit as it seemingly becomes a never-ending array of hysteria and violence with no point to it, but for those who are patient will be guaranteed a pleasant surprise.