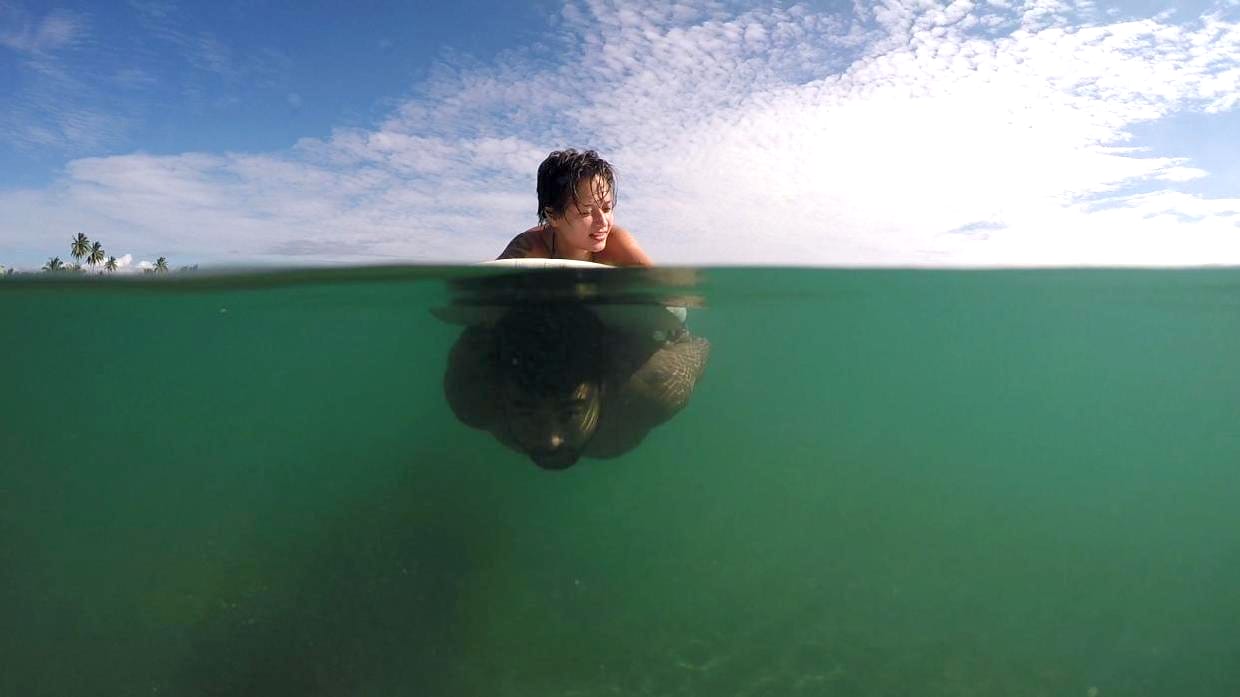 If you were told that your father was a famous film director, would you prefer to live in blissful ignorance, or find out the potentially painful truth? Apocalypse Child is a film about Ford (played by the dashingly rugged Sid Lucero, a popular actor and TV star in the Philippines), an enthusiastic experienced surfing instructor who has always been told his father was Francis Ford Coppola. Yes, the Francis Ford Coppola who directed Apocalypse Now in the Philippines.

This then, is where the film begins; with the audience told one legend of an illegitimate son, and another legend that surfing began in the Philippines from the abandonment of a surfboard by the departing American film crew. Are either tales true? Who knows, and Apocalypse Child rightfully admits so in the opening scenes, where instead we are treated to a film that dances around truths, gracing the audience with a narrative about the myths we tell one another. Whether those myths are true or not, whether we want them to be or not, and whether telling one another those myths (even though knowingly untrue) help us to lead better lives.

Apocalypse Child focuses around the relationships between Ford and those around him. He teaches his new girlfriend Fiona (played by the tantalizing Annicka Dolonius) how to surf, an out-of-towner who has been swept up in Ford’s rugged mysticism and is a lot wiser than her youthful looks portray. We also see Ford’s mother Chona (Ana Abad Santos), a wistful middle-aged remnant of 70s hippieism who is more friend to Ford and his compadres than she is a mother figure and guiding hand. Chona is one if the most interesting characters of the film, clinging forlornly to the myths she’s told herself for so long, whilst depriving Ford of the mentoring parental figure he so evidently needs. Added to the mix is Rich (played by the charming RK Bagatsing), the childhood best-friend of Ford, who has returned to Baler after the death of his father (a father who was also the only parental figure to Ford himself) to take over the job of local congressman.

The characters weave through a web of connectivity in the myths they have created around one another, using these lies and half-truths to maintain relationships and a stable, but acceptably unrealistic lifestyle. These myths are so realistic; in the way that the characters hide from one another personal tragedies such as domestic abuse, teenage pregnancy, underachievement and familial resentment, that I can’t help but feel that Apocalypse Child is one of the few films I’ve ever seen with truly realistic characters and development. There is no extrapolation of drama, no ‘addition’ of unnecessary padding to create unneeded interest or tea-time television soap character portrayals. The characters in Apocalypse Child feel like friends and acquaintances we would all know, with constant emotional diversions used as distractions for hidden tragedies and personal grievances.

The cinematography in the film is subtle, being a compliment to the main focus of the narrative and the characters themselves. The camerawork here is not to add an extra element to the film, but instead to merely compliment the script and tell the story. There is never a detraction with fast paced or ‘action’ camerawork, instead the use of honest and revealing camera angles give the feeling of security and closeness with the actors. Whether we are floating in the water alongside Fiona and Ford on surf boards, or sat in tight angles huddled in quiet discussion on the beach or on Ford’s bed, no scene feels obtrusive and purposely engineered to detract with camera movement. The location is a beauty, with almost every wide-shot feeling more like a painting than a film, giving the haunting need in the viewer to pack a bag and go travel. Stunning vistas, beautiful sunsets and beaches, the shining heart of the Philippines is told alone in the scenery shown throughout the film. Every interaction between the actors feels as genuine as if you were watching a documentary, and the impression is given that this is more an insight into the lives of islanders on the Philippines than actors in a film.

There are two standout stars of Apocalypse Child. The first is the myth of the Philippines itself, which we are told at the start of the film. What is true and what is a lie? We hear plenty of myths weaved throughout the narrative, but as an audience learn it’s more important to tell ourselves these half truths in order to maintain more peaceful and happy lives. It feels that the location and ease of the actors in the film allow this dreamlike idyllic way of living to permeate throughout the film in a sense that wouldn’t be possible if it was shot in Vietnam or England. The second standout star is Annicka Dolonius herself, with the character of Fiona showing a constant arc of progression and development throughout the film, coming out at the end both more adult and wiser. The acting range of the actress is breath taking in the way scenes flow from subdued and meek performances, to explosive and painful expressions of emotion. This growth in the performance of the actress is what elevates Apocalypse Child from a film that not only stands out, but is also memorable from the development of all the characters alone.

Apocalypse Child is one of those rare beauties that come along once in a while, where the narrative plays second fiddle to a combination of perfect locations and the performance of the characters. Stunning vistas of Baler, mystical half-tales of the past and emotional revelations, jaw-droppingly realistic character portrayals. This work of director Mario Cornejo may just be his best film yet.