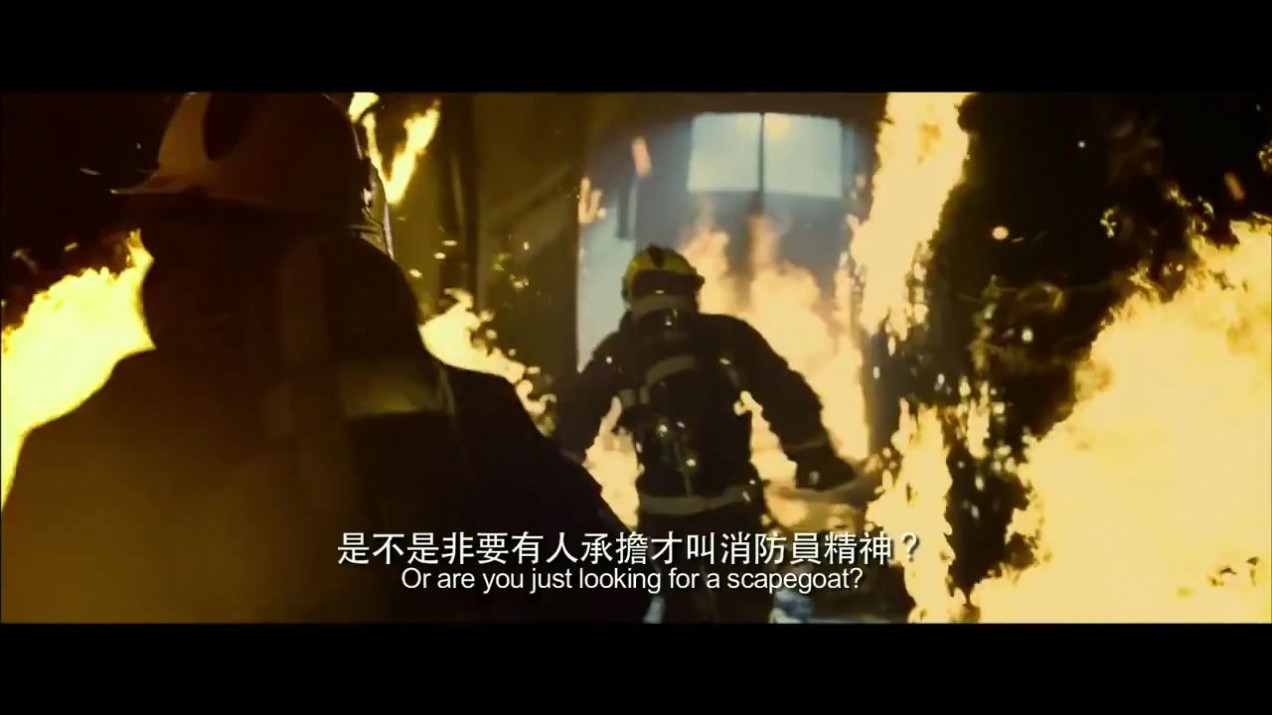 A bleak action disaster movie with lots of charring ups and downs, one of the weaker ‘public service’ films released this year…

As the Light Goes Out follows the firemen of Hong Kong on Christmas Eve as they battle blazes at a power plant struck by disaster, and battle to save the city from going into a complete blackout. Intriguing performances are put forth from all the major names and a lot of main-screen attention is given to the performance from China’s Hu Jen. A blockbuster more thematically in common with bigger Hollywood disaster movies such as Twister, this unexpected Hong Kong hit doesn’t fizzle out until the credits finish.

Derek Kwok is the director of this action drama, an educational film which places as much emphasis on the action as it does helping the audience empathise with the jobs of emergency service units and the dangers of firefighting. Early on we are told that smoke can kill in three minutes, and this is certainly put to the test as Sam (Nicholas Tse) and comrades Chill (Shawn Yue), Yip (Andy On) and Ocean (Hu Jen) repeatedly face more billowing smoke and dark rooms than fire throughout the scenes. The film starts one year earlier in a disciplinary hearing where Chill takes the rap for making a bad call and endangering the lives of two others, time skipping forward to Christmas Eve on 2013 we now see that his friend Yip has taken advantage of this by getting promoted whilst Chill remains on the bottom rung and Sam tentatively watches from afar.

There is always a sense of comradeship and family in the film; as even though troubles and rank separate the group, they still pull together laughing behind closed doors or helping each other out by filling in school recommendation forms, one notable scene includes Sam giving permission for his demoted melancholy partner to drop his son Water off at school in the fire truck. The soap opera play however does little to progress the story with all the relatives seemingly upset with their firefighting spouses and the outlying disaster from this laying in wait later in the movie. The most interesting part of the film is not the firefighting itself, but the small pieces of downtime that the team have at the station training and the bi-play between themselves and the other firemen, indeed the firefighting is the most turgid part of the film which is weighed down by laborious backstory and unnecessary side plots, with characters randomly appearing and getting into trouble during a building collapse for no other reason asides a lack of common sense or a need to beat the plot forward with a stick.

This setup however has nothing on the finishing action piece, a massive explosion in the power plant that powers Hong Kong leads to blackout’s across the city, whilst both employees and school children (where Chill’s son was dropped on an outing) are in danger from the disaster. Building on this is the touted ‘hottest Christmas Eve ever’ with a typhoon approaching, a lack of professionalism in the egotistic government employees who hold positions of power, and all this eventually leads to them accidentally sacrificing the lives of the more deserving firefighters for their own reputation. The first half of the film spends most of its time prodding a lot of traditional film stereotypes with a stick, and the other half plodding through a swamp of turgid backstory. The rest of the film focuses around the rescue mission of the power plant itself, with massive set pieces and a lot of pyrotechnics and CGI in place to sell the destruction well. It all looks very pretty, however a mess of individual stories means that the camera flits about through the action and it’s hard to see which actor we are currently following, and it feels that all of this haphazard jumping around in the script is trying to be disguised by the billowing smoke and the loud noises to distract the audience from the disjointed narrative.

As the Light Goes Out is nothing but evocative of the courageous actions that it’s main characters parade throughout, with a lot of large action scenes and taking big risks in the script, however there is little substance in the characters themselves and the plot suffers from being as hazy and insubstantial as the murky smoke lingering in every shot. There are better firefighting films out there, however Derek Kwok and the cast deliver a valiant effort in a film that is both enigmatic and an enjoyable brash cinematic experience, it works well in a theatre with the hazy dark scenes and loud explosive pieces. The frequent mentions to a typhoon are a nice touch to the (also released at a similar time) police services film Firestorm; however in a comparison it’s notable that Firestorm exceeds in all the areas that As the Light Goes Out does passably. Unfortunately this is not a film that shines bright like the fire it epitomizes, but instead it flickers drearily through the murky smoke of the narrative portrayed.

As the Light Goes Out screens at the New York Asian Film Festival 2014 (NYAFF).