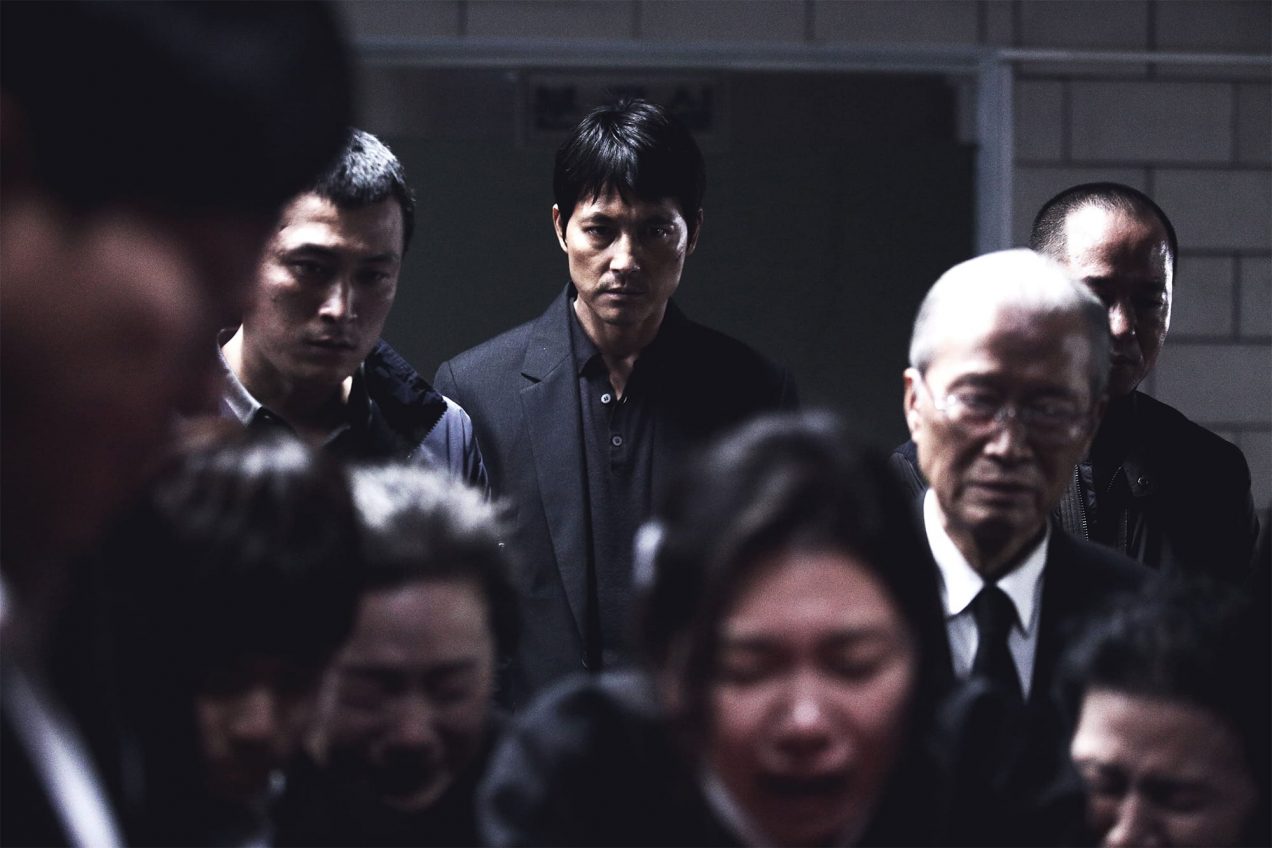 Korean director Kim Sung-soo has had a very varied career, from romantic comedies like Please Teach me English and the demon hunting fantasy The Restless through to his recent blockbuster disaster movie The Flu. His latest offering Asura: The City of Madness sees him trying his hand at hardboiled gangster action, reuniting him with regular star Jung Woo-sung, who previously worked with him on Beat, City of the Rising Sun and Musa the Warrior. Its name drawn from Indian mythology, the film is a violent, brutal affair, which premiered at Toronto before going on to win acclaim at a number of other international festivals, picking up a series of awards at home and abroad.

Jung Woo-sung plays Han Do-kyung, a detective forced to take bribes in order to pay for his wife’s exorbitant medical bills, his debts placing him at the behest of the city mayor Park Sun-bae (Hwang Jung-min, The Wailing). Park is a corrupt, power-hungry man involved in a shady urban redevelopment scheme, which brings him to the attention of prosecutor Kim Chain (Kwak Do-won, who co-starred with Hwang in The Wailing), who resorts to underhanded tactics himself to bring down his quarry, blackmailing Han and forcing him to turn against his boss. Desperate to find a way out, Han persuades his rookie partner Moon Seon-mo (Ju Ji-hoon, The Treacherous) to take over his position as Park’s top goon, though needless to say, things don’t work out even remotely as planned.

Asura: The City of Madness is a film whose entire cast of characters seem to be in a permanent state of enraged enmity, all constantly at each other’s’ throats, plotting, scheming and trying to bring their rivals down – the film isn’t dog eat dog, so much as dog rip dog apart and spit out the pieces. It’s a dark, nihilistic film as a result, filled with characters who have no redeeming features, only Han being vaguely sympathetic. Thankfully though, Kim Sung-soo gives the film an over the top, almost satirical air, and the feel of a nasty comedy of errors, its characters trapped in their cycle of violence and even the most well-meaning move (of which there are few) bringing only more troubles. Tightly plotted and tense, the film shows the same distrust for authority as Kim’s The Flu, and though the scale is smaller, Asura is if anything more contemptuous towards the ruling class and the so-called greater good, depicting Korea as a corrupt, hopeless society where the chances of surviving and retaining any sense of innocence or goodness are pretty close to zero. While there’s technically nothing new about the narrative, it’s this extra dose of nastiness and coffin-black bleakness that really makes the difference, and, against the odds, the film does carve out an identity of its own.

The film benefits from a near-perfect cast, the male leads really giving their all, and seeming to take no small amount of glee from playing such vicious characters, clearly having a great time chewing the scenery. It’s very much an ensemble piece, driven by the various shifting relationships between the four men, something which unsurprisingly results in a lot of macho shouting and cruel laughter, and Kim does a great job of keeping their dynamic engaging and dramatic. Jung Woo-sung in particular impresses as Han, making the unfortunate man likeable and human despite his many poor choices, giving the film what passes for its emotional core and winning himself Best Actor at the 17th Busan Film Critics’ Awards. Oddly, it’s arguably Kwak Do-won and Ju Ji-hoon who come across as the villains of the piece, though this is mainly down to the fact that Hwang Jung-min’s performance is one of his most enjoyable and unhinged of recent years, making Park an evil pantomime figure who it’s genuinely difficult not to root for.

Asura is also a great-looking film, in a suitably modern noir fashion, whether in the shadowy alleyways and rooftops, or the ominous-looking board rooms and police stations, and the film has an air of threat and danger throughout, nicely reflecting the paranoia and edginess of the characters. Regular Kim Jee-woon cinematographer Lee Mo-gae does very impressive work, winning himself Best Cinematography at both the Blue Dragon Film Awards and Busan Film Critics’ Awards. It’s all very well-staged and choreographed, and Kim keeps the action and pain coming thick and fast throughout. The film is definitely one of the most brutal and bloody of its type, with torture, stabbings, beatings and more, Kim notching things up as it builds towards a markedly carnage-filled climax.

While Korean churns out more than its fair share of films about cops, gangsters and corruption, Asura: The City of Madness is easily one of the best of the last few years, not to mention one of the most savage. Boasting great performances, a cutting script and some thrillingly-staged violence, the film is a triumph for Kim Sung-soo, and a must-see for all genre fans, even those who think they’ve had their fill of the form.

Asura: The City of Madness is available from YesAsia.