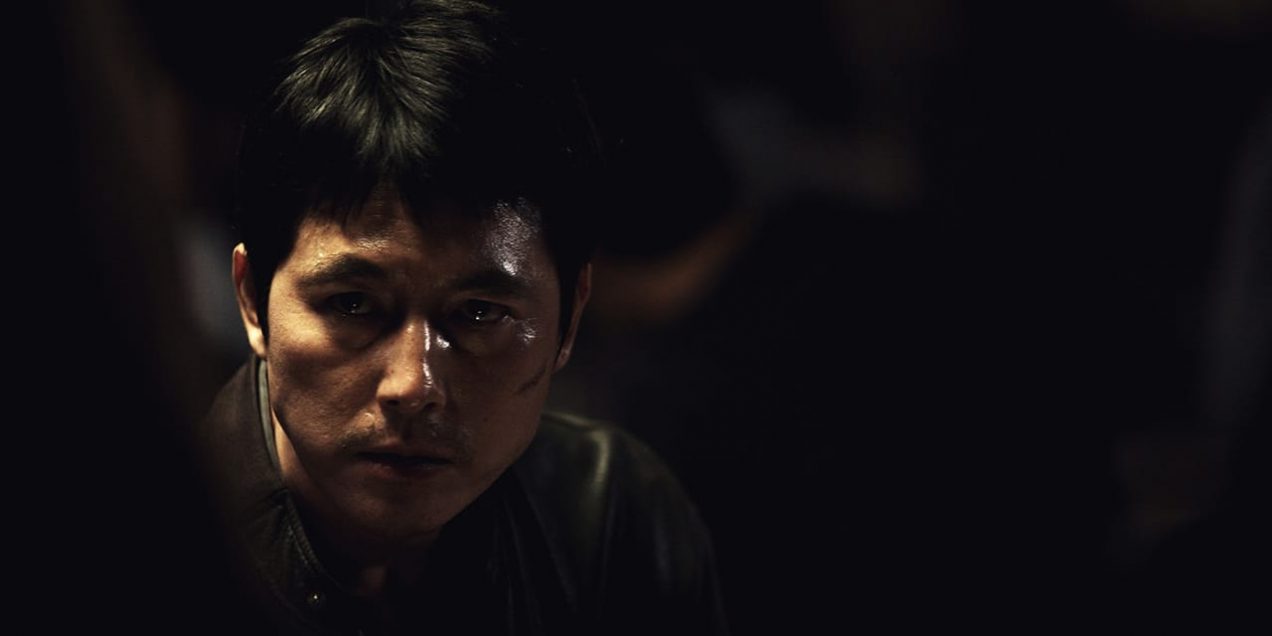 The films of crime and punishment are endless and full of wrong turns, bad choices and easy ways out that end badly. Asura: The City of Madness is a film that distills the idea of law vs. chaos so succinctly that it’s hard to imagine the film not working on some level, even if you take it apart as either the plot in a straightforward manner or on a much more complex level.

Han Do-kyung (Jung Woo-sung) is a detective who works in the city of Annam which is not so much a city as it is a series of slums, highways, offices and houses where nobody really knows the truth of anything without being compromised in some way in the knowing. Chief of all this is the mayor, Park Sung-bae (Hwang Jung-min), who presents himself in a series of carefully choreographed photo-ops as a man of the people but in reality, he’s the reason in some part that there is a criminal element in the city. He consorts with criminals, destroys evidence of corruption and wrongdoing and then smiles for the cameras when it all goes his way. His main weapon in this is Han who acts as his enforcer and eyes in the justice department. Han’s only real weakness is his wife who is dying in hospital so he’s trying to escape from the police and work for Park full time. But an incident in the beginning of the film lands him in the sights of the chief prosecutor who wants to take down Park and will use any means to get it and Han’s just become the latest weapon in the war against the Mayor.

The cast is the most potent weapon in Kim Sung-soo’s arsenal. They tear into each scene, ripping apart other films who have delusions of grandeur in how powerful people should act in films. Every one of them knows the damage that could be inflicted on themselves, their allies and their enemies if one false move is made. Just look at any scene involving Jung Woo-sung and Hwang Jung-min. Han and Park start the film as uneasy allies, bonded by blood in the form of Han’s marriage to Park’s half sister. But as the film goes on, their dynamic changes over and over again, sometimes within a scene as the two men try to best each other or gain an edge over the other. Park is the personification of evil, slyly egging the people in his direction while holding everyone else in orbit. Hwang’s twitches, chilling looks and spontaneous humour in dark scenes invokes Kenneth Branagh’s Iago from the film version of Othello. He infuses Park with a kind of fatalism, a feeling that nobody gets away from him unmolested. Special prosecutor Kim Cha-in (Kwak Do-won) has the grim optimism of every angry, morally dubious lawman in film: he’ll get his man no matter who gets hurt. Like a metaphoric Ahab, Park is the White Whale and the rest of the cast are the men of the Pequod. Kwak’s take on the prosecutor layers anger, repressed frustration and righteous fury into a delicious package. His role is doubly important since he must duel Park and bend Han to his will.

The dialogue scenes between Han and Prosecutor Kim are mined with furies and silences where the camera not so much records what they do as it does witness their characters working through their great labours. But hands down, the main character of Han as played by Jung Woo-sung is a singularity around which every other actor moves. Whether it’s beating up a suspect for a murder or spitting blood on a table, grieving for his dying wife or bellowing orders and accusations at someone, Jung Woo-sung is so good in this. His arc moves from fallen and defeated cop to coldly adept killer and finally to vengeful indignation that he’s allowed himself to fall this far at the hands of such petty men. He glues you to your seat staring into a person’s face, lying all the while, and never once looking guilty once while doing it. Also, hats for him for the beating his character takes. Scuffles turn into beatings, beatings into near hospitalisations and his face looks more like roast beef the longer the film runs for. Jung stares out from the makeup, lost in a maelstrom of pity and anger as his life disintegrates because of jealous and petty men. He slaps the film and the film slaps back, letting each combatant know where they stand with the other.

Kim Sung-soo directs the picture with roadrunner-like speed, launching us into each scene as it could go any way it wants. The most energetic scene is the car chase in the midpoint of the film as Han races to stop two criminals and the camera jumps in and out of both vehicles as he slowly loses his cool, blood pumping down his face, bullets flying and he lets out his battle cry and swings into a kind of cinematic hyperactivity. Think of the Church fight scene from Kingsman but with a car only shorter and you’re halfway there. Scenes of raw violence come right after a calm scene of exposition while the moments with Han and his wife as she worries more about him than herself and he worries about her only make the film a multi-layered affair where your loyalty to the film’s conventions set out early on are rewarded over and over again. Kim’s characters are corrupted and compromised on so many levels that none of them could be considered clean. His approach to take Han, the most corrupted of all, and put him through a trial by fire as he tries to come out clean not he can escape but so at least one person’s conscience can rest easy by film’s end.

The film’s main thrust is that Han is not seeking redemption but rather than he has become intolerant of his tolerance of the status quo maintained by the Mayor and the Special Prosecutor. He’s being broken down in front of us as a warning that the easy way into a life of crime seems simple but escape is next to impossible. But he slowly realises that he needs to save as many people as he can before it comes down on top of him and when his breaking point comes, it is glorious to watch as the film moves into its final act and Han starts the whole rolling with a grim, bloody smile.

Asura is a powerful film, expertly made, beautifully crafted, acted with dedication with no easy answers in the questions of corruption and redemption. It completely came out of nowhere for me and totally had my attention. Call me a convert because I had never heard of Kim Sung-soo before now and really want to see more of his works because this film has a menu, a cast of diners and a hefty bill to pay in terms of the work it puts in. I cannot recommend it highly enough to you.

Asura: The City of Madness screens as part of the London Korean Film Festival 2016 running from 3rd to 27th November.

2 thoughts on “Asura: The City of Madness”