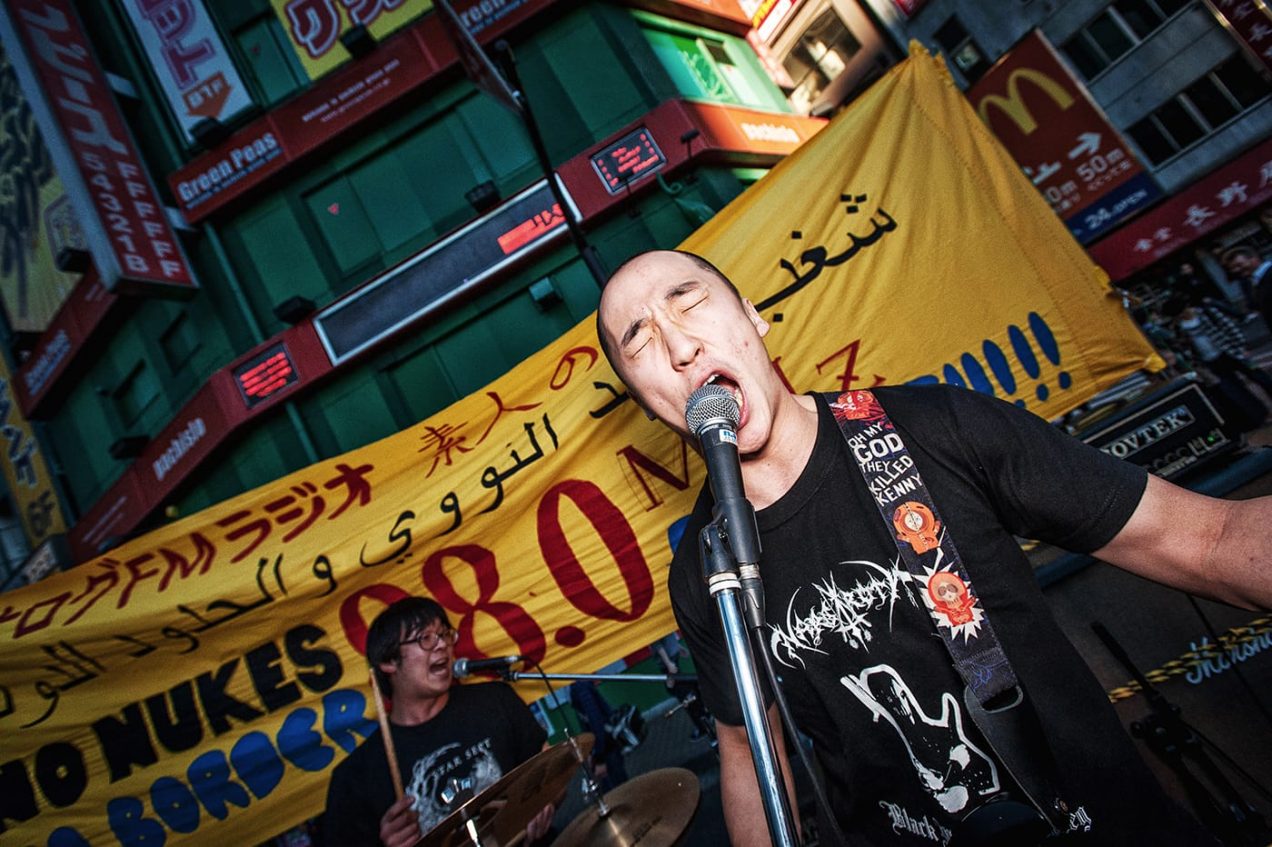 Director Jung Yoon-suk made an impact with his award-winning debut feature documentary Non-fiction Diary back in 2013, exploring both real life murder cases and Korean society in general. Having worked on shorts and television pieces for the last few years, he now returns with his second documentary Bamseom Pirates Seoul Inferno, filming the titular punk band as they play gigs and kick back against the state and against what they see as a sick society infected with hypocrisy. The film premiered at International Film Festival Rotterdam in early 2017, where it emerged as one of the most popular of the festival, and has since gone on to play a series of other events around the world.

Bamseom Pirates the band is made up of drummer Kwon Yong-man and bass player Jang Sung-geon, and the doc follows them as they hold concerts and events in unconventional venues such as abandoned buildings, eschewing the usual music halls and bars in favour of something which more resembles performance art. While they’ve been referred to as a punk act, this is very much a case of pigeonholing, as they band make use of items other than instruments to make their noisy music, and have a very strong visual element, with presentations and video footage being employed as backdrops at shows. Given their anti-authority stance, the band unsurprisingly whips up a considerable amount of controversy, and as the doc progresses it finds them ending up in trouble as a result.

Bamseom Pirates Seoul Inferno is very much an activist documentary, Kwon Yong-man and Jang Sung-geon coming across as a resistance of sorts, being sharply critical of the Korean regime and society, which they view as a corrupt capitalist system, tackling themes such as the country’s relationship with North Korea head-on. There’s a sense of anger throughout, and it’s clear that the band are more than willing to put their money where their mouths are, getting involved with and playing music at student protests, urban land development sites and the like, allowing Jung Yoon-suk to get some pretty fascinating footage. The doc does have a lot of strong scenes of this type, giving it the feel of a very socially-aware work, and though it stops short of lionising its protagonists too openly, it does give the impression that Jung is on their side. At the same time, Kwon and Jang make for naturally engaging documentary subjects, and there’s a very enjoyable lack of pretension or self-important preaching to their crusade, the two being charismatic and amusing, never being afraid to crack jokes at their own expense, acknowledging the outlandishness of their attempts to agitate.

This isn’t to say that Bamseom Pirates Seoul Inferno is a light-hearted doc, and though basically accessible it does suffer from a rather punishing running time of nearly two hours, something which might well prove a bit much for average audiences. Similarly, while Jung has done a good job of making the doc both visually appealing and accessible, with plenty of explanations and information on the political and social context, it’s undoubtedly one which will play better to those with an active interest in or existing knowledge of the subject rather than casual viewers. Certainly, a taste of the Pirates brand of music, be it punk, grindcore, experimental noise or whichever label might best apply, would also help, as the film feature a lot of concert scenes, some of which do push out the sonic boat.

These caveats aside, Bamseom Pirates Seoul Inferno is an impressive doc that succeeds in both tackling a challenging subject and in finding a pair of compelling lead characters. As with Non-fiction Diary, Jung Yoon-suk again here offers up a film which not only entertains and holds the interest, but which has an earnest and thought-provoking social conscience.

Bamseom Pirates Seoul Inferno screens as part of the New York Asian Film Festival 2017, which runs from 30 June to 16 July.