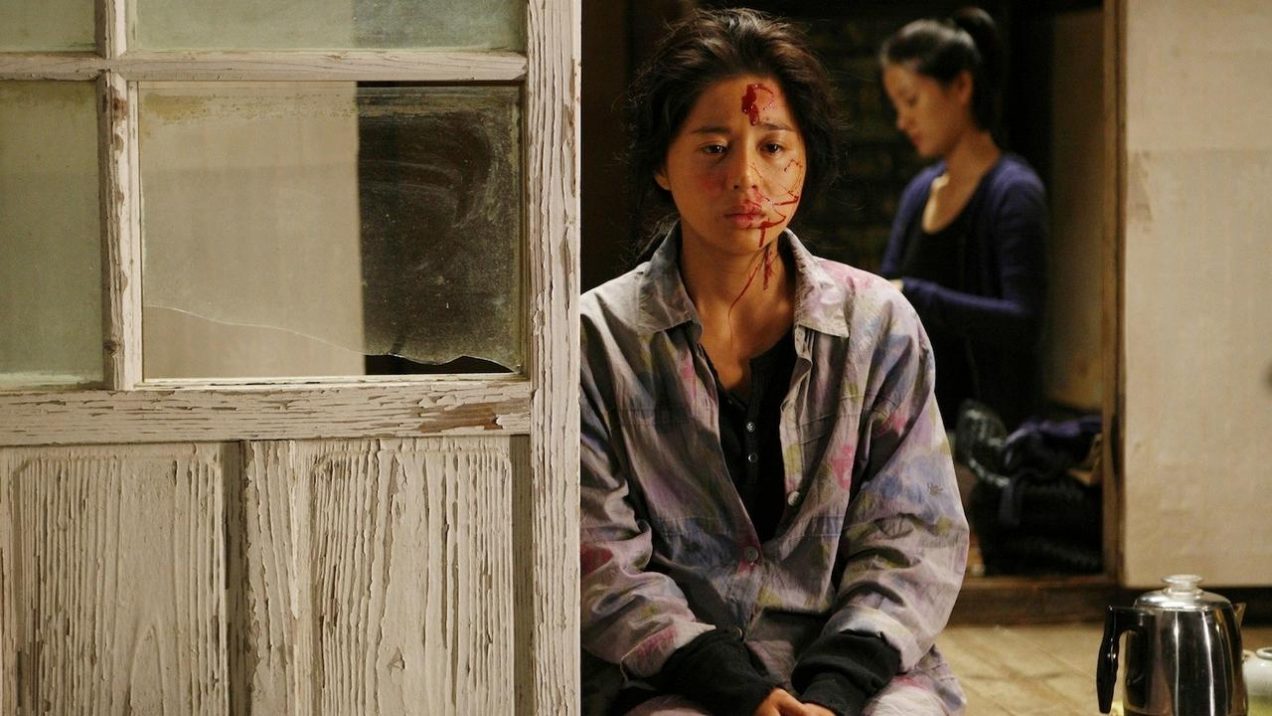 Bedevilled emerged as one of the most hard-hitting and accomplished films from Korea in 2010, a shocking and unforgettable revenge thriller starring actress Seo Young-hee (The Chaser) as a woman pushed too far. The film marked the debut feature of Jang Cheol-soo who previously worked as an assistant to Kim Ki-duk, and so it’s perhaps unsurprising that it deals in no-holds-barred fashion with themes of abuse, gender politics, and of course, murder. Perhaps unusually for an uncompromising and violent outing, the film was hailed by critics around the world, premiering at the International Critic’s Week at Cannes 2010 and going on to win a number of prizes and nominations for Jang and Seo.

The film kicks off with cold Seoul career woman Hae-won (Ji Sung-won, Empire of Lust) having a dreadful day, witnessing the brutal beating of a young woman and being pushed over the edge by the pleadings of an old woman at the bank where she works. Told by her boss in no uncertain terms to take a break, she heads to remote Mudo Island where she grew up and where her friend Bok-nam (Seo Young-hee) still lives, whose letters she has been simply throwing unopened in the trash. She soon discovers that Bok-nam has been suffering horrific abuse at the hands of her husband and his brutish brother, not to mention being exploited by the handful of cruel old women who make up the rest of the island’s tiny population. After it becomes clear that Hae-won is unlikely to help, Bok-nam grabs her young daughter and tries to flee, though is soon recaptured, the poor child dying in the process. Finally snapping, the unhinged woman grabs a sickle and takes bloody revenge.

Bedevilled is a far more morally complex and challenging film than this synopsis might suggest, and is by no means a straightforward revenge thriller in the traditional sense. Similarly, despite its setting, the film isn’t an exercise in exploitative backwoods fear, with Seoul being portrayed as a bleak place full of random violence, and with the island being run by a monstrous matriarchy whose members are every bit as bad as Bok-nam’s male abusers, reinforcing oppression and ignorance. The film also eschews a typical revenge narrative or indeed the usual patterns of victims and abusers as protagonists, beginning with Hae-won as the main character, and later shifting to Bok-nam, only for things to be turned on their head when she turns devilish aggressor.

With Bok-nam being the only sympathetic character, director Jang immediately forces the viewer to face the full horror of her existence, pulling no punches in his depictions of her being beaten, sexually abused and mistreated in every way possible, physically and emotionally. However, at the same time, whilst the blame clearly lies with the island’s inhabitants and perhaps to a greater extent to Hae-won, it’s also suggested that the apathy and acceptance that she has fallen into make her to a degree complicit in her fate. It’s this kind of complexity and painful humanity which really marks Bedevilled as such an accomplished work, and Seo Young-hee’s multi-layered performance gives her role the substance it needs, being one of the best and bravest from a Korean actress during the period. Her transformation from victim to killer is wholly believable, never falling back on either the usual damsel in distress or wide-eyed lunatic riffs, and as a result the viewer is dragged along with her on what proves to be a truly devastating journey.

While the brutal power struggle and battle between the sexes at the heart of the film, characterised almost entirely by abuse and violence (summed up in stunning fashion in a disturbing scene where Bok-nam fellates a knife), is certainly reminiscent of Kim Ki-duk’s works, Jang goes for a more gripping narrative approach, melding his themes with the story rather than allowing them full reign. The film is incredibly tense throughout, with the threat of violence ever-present, playing off neatly against the atmospheric rural idyll of the setting. The omnipresent air of brutality is so effective that when the film switches to Bok-nam whittling down the inhabitants of the island it never misses a beat, with her actions seeming logical and inevitable. After being terrifyingly violent for the first hour in terms of domestic and sexual abuse, the film later becomes intensely gruesome once she goes on her sickle rampage, with some spectacular scenes of throat-slitting and worse. However, these are not played for kicks in the traditional slasher film manner, and work well to underline Bok-nam’s decent into homicidal monstrousness, putting the viewer in the difficult position of not knowing whether to root for her or not.

Bedevilled still stands as one of the toughest and most powerful films from Korea this century, and is more than deserving of the praise it garnered on its original release. Anchored by a stunning performance from Seo Young-hee, it stands as a must-see for anyone brave enough to run its emotionally draining gauntlet.