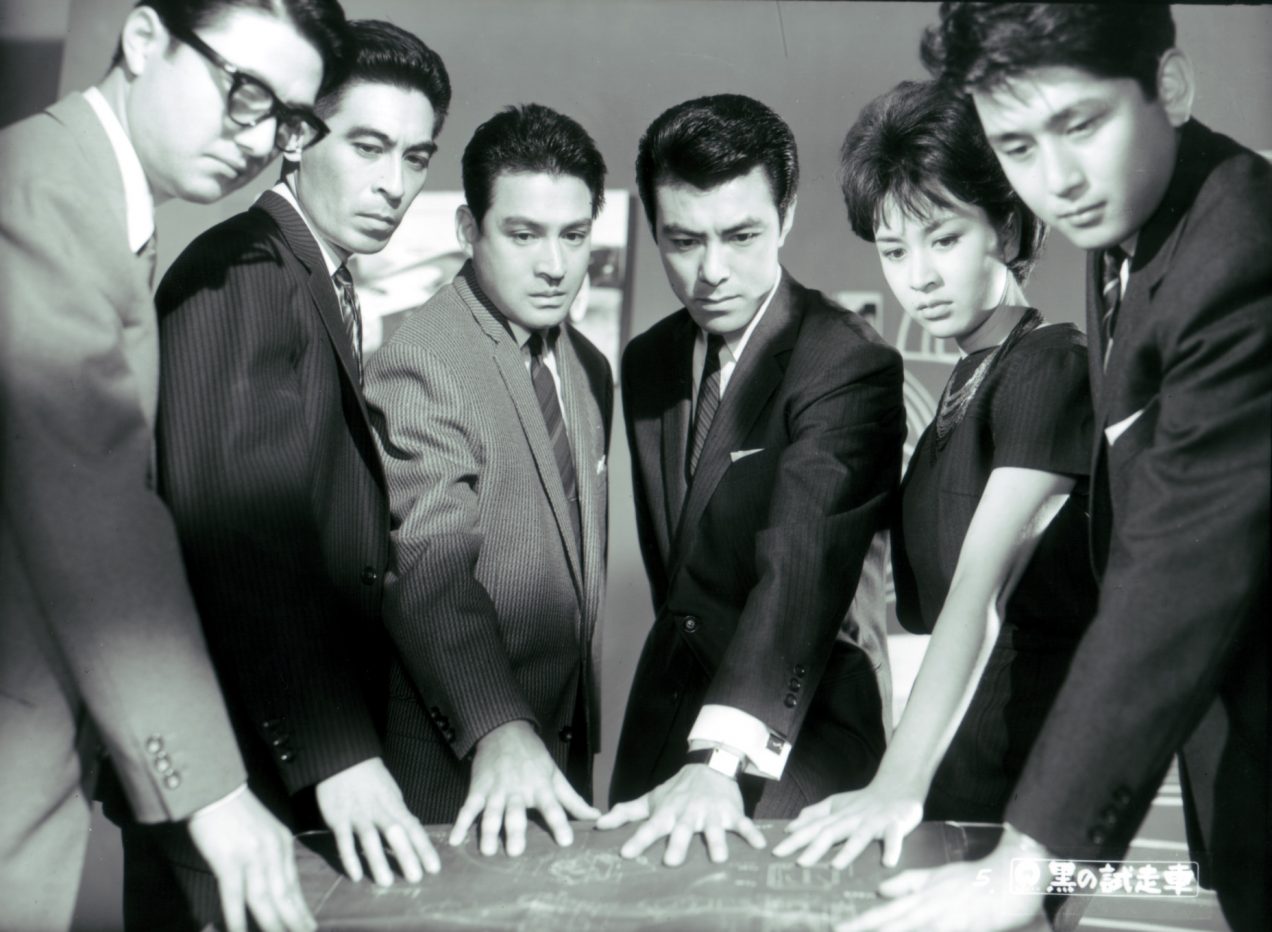 Who can you trust in the world of competitive car manufacturing?…

When I first read Black Test Car was about rival car companies at war my first response was;

It’s an odd premise because car manufacturers aren’t the first choice for a spy thriller but rather competitive racing films like 2019’s Le Mans ’66. Rarely do we hear about rivalries behind the scenes of the drivers. Surprisingly however the film manages to suck you into a menacing world of backstabbing and scheming where characters cross dangerous lines to outdo each other. What results is a film fashioned more as a film noir rife with cynicism and twistedness.

The plot follows Tiger Motorcar Company working on a top secret sports car due for launch, their rivals Yamato Company, however, seem to know Tiger’s every move and manage to copy elements for their own sports car production. Tiger then suspects someone in their company is spying for Yamato leading to Creative Head Toru played by Hideo Takamatsu (Shogun, The Last Emperor, Black Statement Book) becoming obsessed with finding the company traitor and employing his own spy tactics to get one step ahead of Yamato Cars. What follows are clever yet desperate tactics employed by increasingly paranoid and ambitious men doing everything they can for the sake of the company. Or so they are convinced.

From the explosive opening showing a black test car ripping across the road before crashing into flames as dramatic music blares over the title, the tone of the movie is set. This rivalry is driving down a dangerous path.

As mentioned before the film subverts expectations with its style; instead of intense drama with characters screaming at each other, the film is set more like a WW2 spy noir. Being a black and white film lends well to the noir aesthetic along with expertly filmed shots. Even the characters are styled like noir stereotypes; company employees behave and speak more like underworld gangsters with their scheming and dirty persuasion tricks. The women who comprise of girlfriends or hostesses are femme fatale like using seduction and smarts to manipulate the men around them. The soundtrack which consists of low, moody jazz numbers with an ominous edge is the final piece that sucks you into this sleazy yet alluring world.

The plot mostly consists of characters scheming, backstabbing and plotting against each other which makes for fascination viewing. You wince yet marvel at how low some Tiger employees will stoop to gain Yamato secrets, one scene includes Toru’s right hand man Yutaka played by Jiro Tamiya (The Ivory Tower, Miyamoto Musashi)  convincing his girlfriend played by Junko Kano (Typhoon Reporter, Black Statement Book) to sleep with a Yamato employee to steal confidential documents. Despite her obvious discomfort. One of the most creative scenes involved Tiger secretly filming Yamato in a business meeting and using a lip reader to decipher what they said, I can’t say I’ve ever seen this technique in a spy movie before. Yet despite characters questioning along the way their increasingly immoral actions, they are constantly reminded “it’s all for the company” therefore justified. Even supposed allies can betray you within a second if they smell money offered by somebody else causing everyone to ask who they can really trust. The humanity bleeds out of these men as they grind in the capitalist machine leading audiences to eagerly wonder, what will they do next? What can they do next?

The ultimate question for Tiger Cars is who is the spy? I won’t spoil the discovery but the car crash at the beginning foreshadows the only way this story can end.

If I had one criticism it’s the lack of cars. You’d think a movie about car manufacturing would include more cars in the background since this is what all the ugliness revolves around. Maybe throw in a test race here and there or some revving sounds in the background to sprinkle a little excitement into the film! The constant focus on secretive conversations between characters can make things a tad boring.

I was surprised by how engrossed I was by Black Test Car, the odd setting still works thanks to the noir aesthetic and unpredictable plot. It’s a grossly underrated movie and frankly, the Japanese Noir genre needs rediscovering.

Black Test Car is released with sequel The Black Report on UK Blu-ray on 24 August 2020 by Arrow Films.