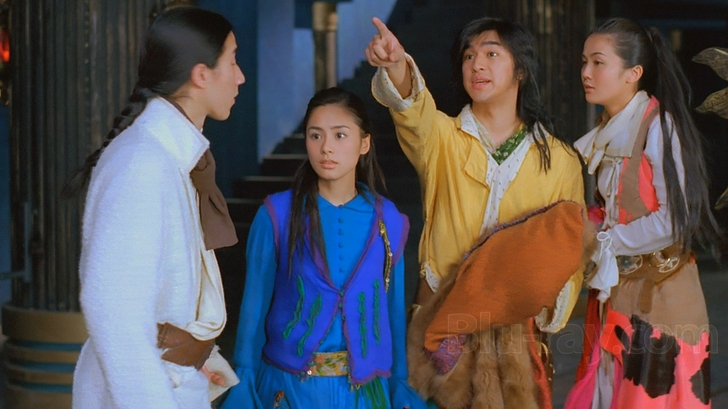 Otherwise known as The Twins Effect II, it’s finally released on UK DVD – but were we really that bothered?…

Once upon a time there was a film called The Twins Effect. It wasn’t actually very good, a sub-Blade, uneven tale of arse-kicking lady vampire killers, coming a little too long after Buffy’s popularity and a little too long before the mind-numbing Twilight series. Only it had some incredible choreographed action by a certain young fella named Donnie Yen who probably just wanted to prove how badly he’d been wasted in Blade II. (And yes, that was one hell of a waste!)

Oh, and it was also a vehicle for the Cantopop act phenomenon Twins, Charlene Choi and Gillian Chung, so it did rather well, even got a UK release the following year. Which meant a rushed sequel was bound to follow…

And that’s exactly what happened in 2004. Only The Twins Effect II was a completely different story, and was even more panned than the original. So that was that. Years passed; Gillian Chung was rather unfortunately involved in the photo scandal with co-star Edison Chan – resulting in scenes from big productions like Chen Kaige’s Forever Enthralled and Oliver Stone’s W. being cut.

Or so we thought, until it resurfaced earlier this year on DVD in the US as Blade Of Kings (which appears to be a play on the films original working title, Huadu Chronicles: The Blade of the Rose – but just happens to distance it from the former Twins Effect even more).

So was it worth the wait? Well, maybe…

In the distant past, the evil man-hating Queen (Qu Ying, Warriors of Virtue, Take It or Leave It) has seized the throne, enslaving all men in an empire of Amazons. Only the mystic sword Excalibur (hey, hang on a minute there – not enough Chinese mythology to work from?) wielded by the Star of Rex can overthrow her and restore the balance of the sexes.

Swordsman Crouching Tiger Hidden Dragon (you see what they did there?) – played by Donnie Yen (S.P.L.: Kill Zone, Ip Man, The Lost Bladesman, The Monkey King) – is on a quest to overthrow the queen’s regime; assigning Peachy (Edison Chan, The Sniper, Dog Bite Dog, The Twins Effect – who promptly disappears from the storyline altogether) to steal an engraved stone that contains the location of the sword.

Before he can and it over it falls into the hands of his two friends Charcoal Head (Jaycee Chan, 2 Young, Invisible Target, Double Trouble) and Blockhead (Wilson Chen, Kung Fu Dunk, About Love, The Eye 10, Chinese Zodiac), part of a street-performing troupe led by their adoptive father, Blackwood (Tony Leung Ka-fai, Election, Dragon Inn, Dumplings, Zhou Yu’s Train). Captured by rival warriors Spring (Choi, New Police Story, Twins Mission, Robin-B-Hood) and Blue Bird (Chung, House of Fury), they all go in search of the sword, pursued by Crouching Tiger.

Meanwhile, the Queen plans to make sure they don’t depose her…

With much the same tone as the original Twins Effect, Blade Of Kings keeps the focus on slapstick comedy. It’s notable than in this world run by women, both the Twins and most of the warrior women around them seem as timid and jumpy as they do in the modern day masculine-driven world – which rather devalues the pretext, but, er, hell – maybe I’m over-thinking this… But this does as much for equality as The Worm That Turned segment on The Two Ronnies! ☺

Packed with cameos and guest appearances, including minor roles for Daniel Wu (Purple Storm, Overheard 1 & 2, Inseparable) and Fan Bingbing (My Way, Shaolin, Shinjuku Incident), this actually has one heck of a cast, mainly wasted. There are loads of different fractions and characters running around, none of which have much bearing on the main plotline. The acting – and even general premise – seem more like a pantomime. Much of the direction is pretty pedestrian, despite a reasonable amount seeming to have been spent on production, costumes and sets, which I’m guessing is down to co-director Patrick Leung (Born Wild, Demi-Haunted). Oddly, it seems almost as much of a vehicle for Jaycee as it does for the Twins, but that’s not to imply there aren’t some redeeming elements to the movie…

The fight scenes, this time directed by Corey Yuen, however, are stylishly dobe with some neat ideas (and the odd old school Shaw Brothers style ‘gadgetised’ weapon). Sure, it might not be So Close or Fong Sai Yuk standard, but theses are visually nice, well-edited sequences with little indication of varying degrees of the stars ability (save for an overuse of CGI). It doesn’t have the grounded, more impressively tactile style of Yen’s work on the previous film, favouring gloriously over-the-top wirework that will make you recall the height of wuxia boom in the early 90s.

(Such wirework is deftly parodied in the street performance with bulky rope and pulleys – of course, rather close to how it’s still done!)

Indeed, the whole film has the daft, knockabout flavour of many of the wuxia films from the 90s, which rather makes you yearn for those times when historical dramas didn’t have to take themselves so seriously. And honestly, right now that seems pretty welcome!

With a starring role for Yen this time, this give an opportunity for a crowd-pleasing (if totally unnecessary) cameo by Jackie Chan that allows audience to experience a rare chance to seem them fight each other. (Admittedly a year after they’d done the same in the abysmal Shanghai Knights.)

Like the first Twins Effect, it’s not terrible. Possibly worth seeing for some of the fights – but don’t go out of your way for it! I’m guessing Twins Mission will be turning up any day now…?

Good transfer of the film, removable subtitles… er, and that’s it!