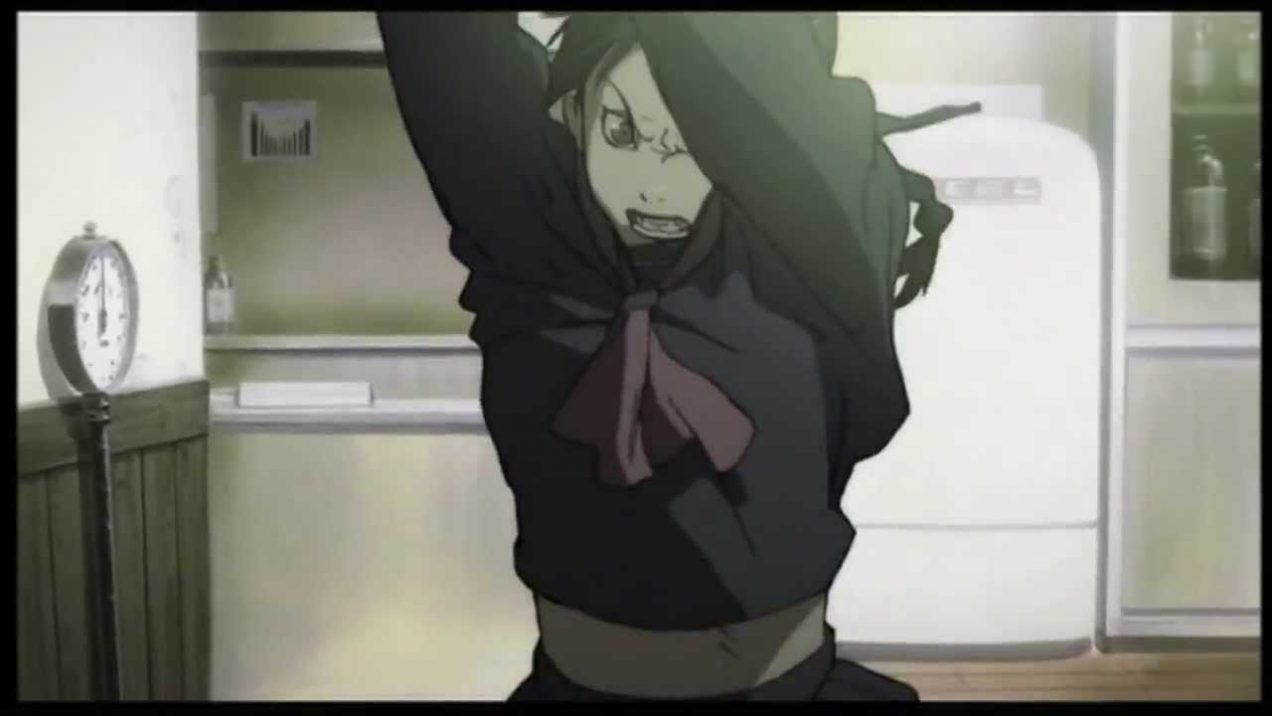 With the upcoming release of the live-action version, what better time to revisit the original that started it all…

In retrospect on the original anime of Blood: The Last Vampire, it’s still an impressive looking piece of film. Essentially a follow-on from Production I.G.’s Ghost In The Shell, both in terms of themes and production, Blood broke new ground in the film was entirely digital – being inked, coloured and animated on computer rather than using animation cells – yet without losing old-fashioned quirks. A revelation that garnered praise from mister CGI himself, James Cameron (who was also a very public fan of Ghost too). It was also one of the first series to be filmed almost entirely in English, no doubt spurred on by the success of Ghost and the financial involvement by UK/USA distribution company Manga Entertainment.

Working for a dubious US government agency, the eternally young Saya hunts down demonic bat-like creatures intent on causing some, undisclosed, havoc on the world. Tensions raised between her and her employers – they refer to her as the last ‘original’ – she is sent undercover as a schoolgirl on an American Air Base in Japan shortly before the start of the Vietnam war. Armed with just a samurai sword that has seen better days, Saya must flush out and destroy these creatures before they fulfill their nefarious plans – but Saya’s allegiances seem strained – she has more in common with them than her human employers…

At less than 50 minutes long, Blood: The Last Vampire was something of a deliberate tease for audiences. Intended as something of a multimedia release, with the story continued in a light novel, and a two-part video game – with hindsight an extremely savvy and forward-looking concept. Of course, for most of those of us unaware of those other release, or even just unable to get hold of them, it was hard not to be somewhat disappointed…

I remember its DVD release coming at quite an opportune moment. I’d just gotten round to watching the original Ghost In The Shell, and spurred on by a love of that film (as well as a new-found knowledge of how much of a rip-off The Matrix was!) I was keen to absorb any similar cutting edge Anime I could lay my hands on, particularly from the same producers. That was in the days when DVD releases were easily over £15 in retail price. Honestly for less than an hours worth of film, however beautiful the animation, that seemed a little steep.

(It’s notable that the original trailer, which we’ve included above, includes several shots that weren’t only not in the finished film, but don’t even appear to be from the same situations shown.)

But the animation itself is truly stunning. It inhabits a murky gray/brown world of golden tints, not unlike Production I.G./ Hiroyuki Okiura’s earlier Jin-Roh: The Wolf Brigade (except without the Hitchcock-styled soft focus). The studio had used a mix of CG and old-fashioned animation styles for years, but despite the digital conception kept the style full of character, and avoiding the soulless flaws of Final Fantasy: The Spirits Within. Unlike other films of the time, here the 2D and 3D techniques don’t jar against each other, despite some of the backgrounds and objects almost looking too real.

The style is as reminiscent of artist Gene Colan’s work on Marvel’s Tomb Of Dracula in the 70s as it is of previous Vampire-themed Animes like Vampire Hunter D. Perhaps that’s not coincidental, considering that series originally launched the Blade character, which had only recently been turned into a successful movie franchise. Half-human, half-vampire, intent on wiping out vampire-like creatures, the characters have a lot in common. Dressed as a schoolgirl, you could also argue the influence of Buffy. (Director Guillermo del Toro returned the ‘compliment’ by referencing Blood in Blade II.)

The scenes within the school have a superb, tangible tension, as Saya waits for the creatures to expose themselves. Indeed, considering the length this section could have been longer. Like most of the Anime coming from Production I.G. at the time, the pace neither rattles along nor brakes, finding a natural rhythm within the simple, effective plotline. Here the unresolved aspects of Saya’s origin, the government agency she works for and the creatures she hunts down help to cover the flaws in the script.

The action is well shot, if lacking the speed or surprise you might expect from an action/horror. Possibly the most memorable scene is where we first meet Saya, in a subway train leading up to a kill, (fairly) faithfully recreated in the new live-action movie. It obviously left a mark on the Pang Brothers, borrowing much the style and look for an assassination scene in the original Bangkok Dangerous. Elsewhere the Halloween party has obvious potential, but again doesn’t seem fully explored.

Despite the English language the acting in generally good, if occasionally stilted. Its greatly helped by Youki Kudo’s performance as Saya, her career far outstretching the occasional Anime voice-over, previous roles had included Jim Jarmusch’s Mystery Train and Snow Falling on Cedars, she’s gone on to appear in L: Change the World, Memoirs of a Geisha and, ahem, Rush Hour 3. Joe Romersa, voice of lead agent David, also has had a somewhat unexpected career, an engineer, singer and songwriter for over 30 years, he’s more recently become known for his Anime voice-over work. (And his singing can be heard on Silent Hill.)

There’s a promise of so much more in Blood: The Last Vampire, that without any sort of resolution in its Anime form, doesn’t quite deliver. Fans of Ghost In The Shell should perhaps look first to the earlier Jin-Roh. However, it’s easy to see the enduring attraction to Blood, having inspired mangas, an Anime series Blood+, and now a live-action film. Perhaps we might finally get that decisive conclusion we’re been waiting for…

The new live-action version of Blood: The Last Vampire is released around UK cinemas on 26 June 2009 by Pathé. We also exclusively interviewed director Chris Nahon and lead star Gianna Jun.

There’s still time to enter our competition and you can win an exclusive Blood t-shirt and this original Anime version on DVD! Click here…