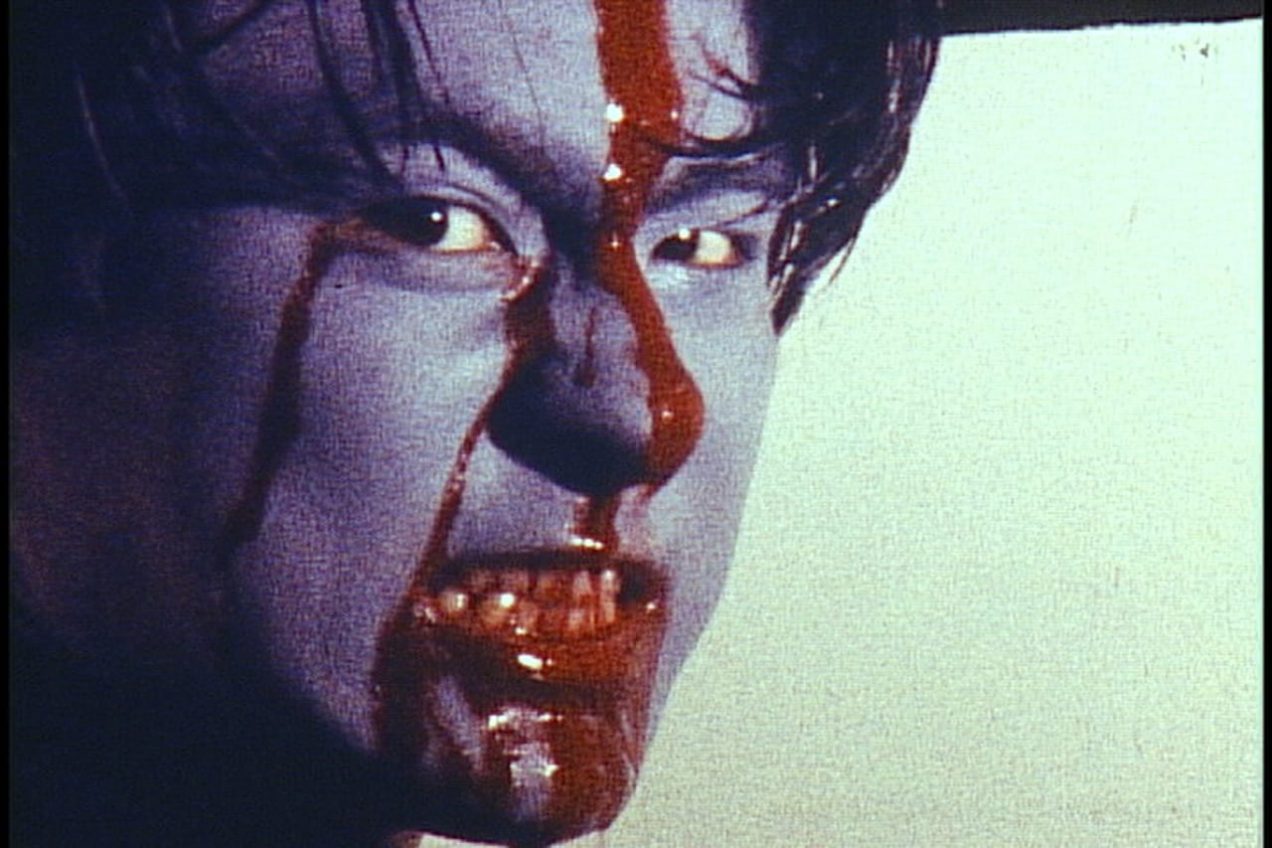 Terracotta Distribution, via their horror arm Terrorcotta, serve up a wild slice of cult Japanese gore in the excellently-titled Bloody Muscle Body Builder in Hell, from triple-threat auteur Shinichi Fukazawa, who writes, directs and stars in his only film to date. Billed as the ‘Japanese Evil Dead’, and with good reason, the 2014 film has somewhat of a hazy production history, which would make for an interesting tale in itself, having apparently been started back in 1995, shooting on on 8mm, before emerging in different versions in 2009 and 2012 and eventually in this final cut.

The film’s familiar plot kicks off with a man being forced to kill his homicidally insane wife, stashing her body in their house, showing scant concern for the usual kind of supernatural shenanigans which result from such foolish behaviour. Some thirty years later, bodybuilder Naoto (Shinichi Fukazawa) has his daily workout interrupted by a call from his journalist ex-girlfriend (Asako Nosaka), who asks him to help her out with some research into a haunted house. Naoto agrees, and joins her and an oddball psychic (Masaaki Kai) on a visit to his father’s long-abandoned property, where the vengeful and particularly angry ghost of the dead woman lurks. Soon enough, the psychic is possessed by the evil spirit, and the promised hell breaks loose, forcing Naoto to make use of his muscular prowess in order to survive.

Bloody Muscle Body Builder in Hell is the very definition of a labour of love, Shinichi Fukazawa’s enthusiasm and obsession with the genre shining through in pretty much every frame, line of the script and soundtrack beat. The film basically plays out like a fan-letter to Sam Rami’s Evil Dead and Evil Dead 2, lifting a long list of scenes and motifs, from Fukazawa’s Bruce Campbell tribute performance (and costume) and final battle tooling up, right through to camera angles and splatter set pieces, though thankfully his obvious devotion never leaves it feeling like a cynical rip-off. At the same time, the film draws from a variety of other sources, notably Nobuhiko Obayashi’s classic 1977 horror Hausu and Toshiharu Ikeda’s Evil Dead Trap films of the late 1980s and early 1990s, with a dash of Lucio Fulci thrown in for good measure. All of this should really endear the film to the right audience, as should its enjoyably lurid musical score, fast pace and incredibly short one hour running time, which leaves no room whatsoever for filler material or the usual niceties of plot and coherence.

As expected, the film’s production values are incredibly low, though this is very much a key part of its appeal, and the grimy visuals do give it a certain seedy, threadbare charm and atmosphere. The special effects, although primitive, are imaginative and frequently a joy to behold, at least for viewers tired of the anaemic CGI featured in so many genre films of the last few years, Fukazawa throwing in gallons of gore, severed limbs and disembowellings, brought to life through balloon heads, papier-mâché, stop animation, claymation and more, all of which is a great deal of fun. Though blood-drenched throughout, the film is never nasty, and while Fukazawa keeps a relatively straight-faced, it’s hard to take things seriously, which of course only adds to the entertainment factor.

Bloody Muscle Body Builder in Hell clearly isn’t a film for everyone, and will likely baffle anyone looking for horror cinema in the traditional sense. However, those with a taste for lo-fi gore and Japanese cult splatter should find the film a real delight, and Shinichi Fukazawa’s mad opus is well-worth seeking out.