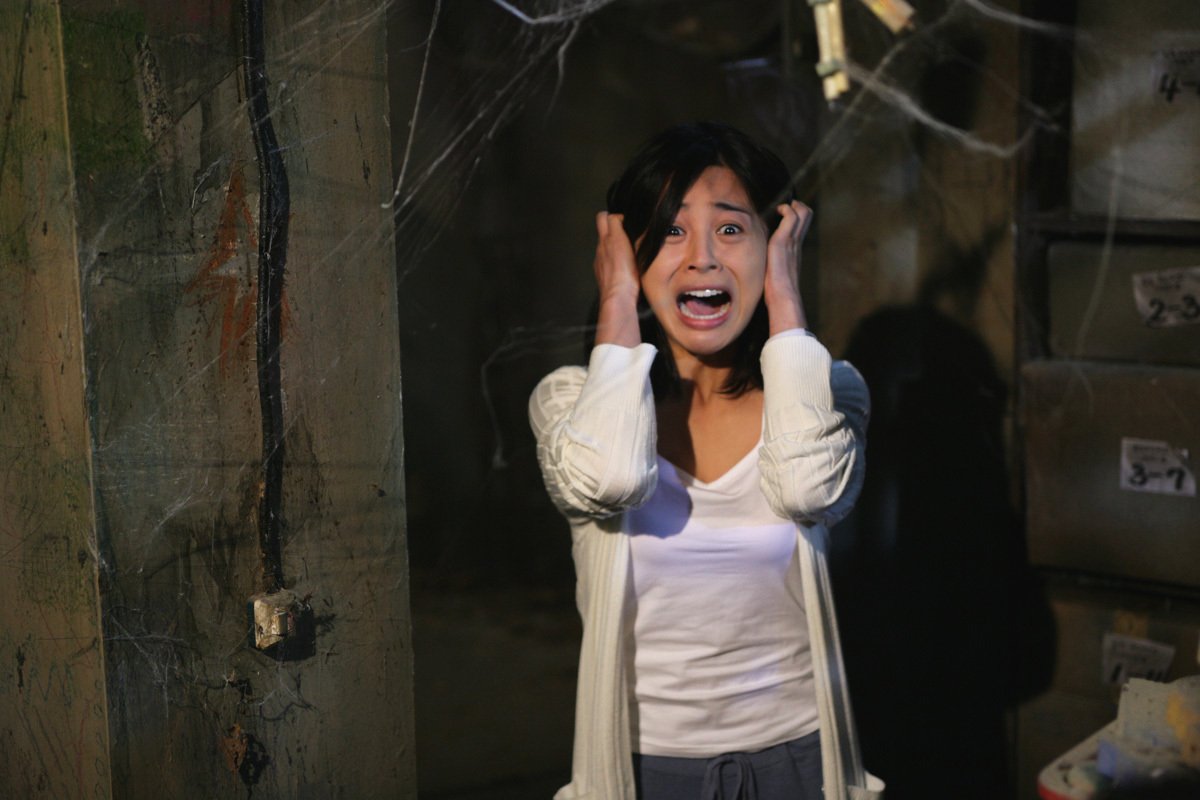 While most other Korean Summer horror blockbusters in 2006 were still focusing on long-haired vengeful spirits, director Lim Dae-woong’s Bloody Reunion, or To Sir with Love as it was originally titled, takes a very different route, going for old school slasher thrills and spills. The film is a wonderfully vicious and twisted slice of mayhem and marked Lim’s debut, which he followed up with the Fear Plane segment of the 2012 anthology Horror Stories, and the 2017 mystery House of the Disappeared.

After an unpleasant prologue depicting the birth of a deformed child, the plot begins with police arriving at the scene of what appears to be a massacre which only two women survived, the old and bed-ridden Ms. Park (Oh Mi-hee, Antique) and her carer Mi-ja (Seo Young-hee, Bedevilled). Mi-ja relates her story to a detective, telling of a reunion of elementary school classmates who gathered together to visiting their ailing teacher, Ms. Park at her seaside home, with the rest of the film unfolding in flashback. Although sixteen years have passed since any of the former students have seen Ms. Park, it soon transpires that their memories of their time under her tutelage are by no means pleasant, and as the day wears on and the drinks begin to flow, more and more past grudges are aired. When night falls, things start to turn bloody, as a maniac, possibly the teacher’s mutant son who has spent his life locked in the basement, wearing a bunny masks stalks and kills the visitors in sadistic fashion.

As this synopsis suggests, Bloody Reunion is every bit the archetypal slasher film, with a young cast being whittled down one by one at a remote location in a variety of nasty ways. More importantly, viewers will be relieved, and probably shocked to hear that the film does not feature a long-haired ghost in any capacity whatsoever, setting itself apart from the vast majority of Korean genre horrors of the time. This in itself is enough to earn director Lim a gold star, though thankfully he goes a step further and packs the film with everything that makes slashers great – make no mistake about it, this is a full-blooded and at times startlingly brutal film, with killings which at the time outstripped anything seen in Asian horror for many years, showing a clear debt to the classic gore of Italian directors Argento and Fulci, filled with loving close-ups of knife wounds and surreal torture.

Lim’s direction is tight throughout, and the film rattles along at a good pace, wisely kept to a running time of just over ninety minutes. Although he does get a little zoom-happy at times, he shows skilful use of flashbacks and sudden visions, which are thankfully not played for exposition, but to disorientate, a trick which works well, keeping the viewer on tenterhooks for most of the running time. The tension gradually builds throughout, leading to some genuinely frightening moments, largely due to the fact that Lim makes it clear from the start that he means business, and never cheats with the kind of false scares which are still sadly all too common in the genre. As a result, there is a genuine feeling of threat, a fact which helps make for an unnerving and decidedly visceral viewing experience.

Even without the plentiful gore, Bloody Reunion would have to rank highly as a nihilistic and downright disturbing film, with a set of sympathetic, if not actually likeable characters, and a closest crammed full of dark secrets. Themes of guilt and responsibility for broken lives resonate throughout, along with some social commentary on the way that the poor are discriminated against by the Korean education system adding a welcome layer of depth and a vague feeling of sadness. The last act, which comes complete with a series of wacky plot twists, does veer into rather crazy territory, giving the film the air of a homicidal version of the classic Korean horror A Tale of Two Sisters, though never in a way which undermines what has gone before. Indeed, although the viewer is left with a sneaking suspicion that none of it actually makes any sense, the resulting ambiguity inspires not frustration, but a desire to go back and watch the film again to try and work things out.

Bloody Reunion stands as one of the best Korean horror films of the early 2000s, and should be enjoyed by any genre fans looking to revisit it. Gruesome and fiendish, it pulls no punches and by bucking the trend of pasty-faced ghost films, it offered something that was fresh, shocking, and above all, entertaining.