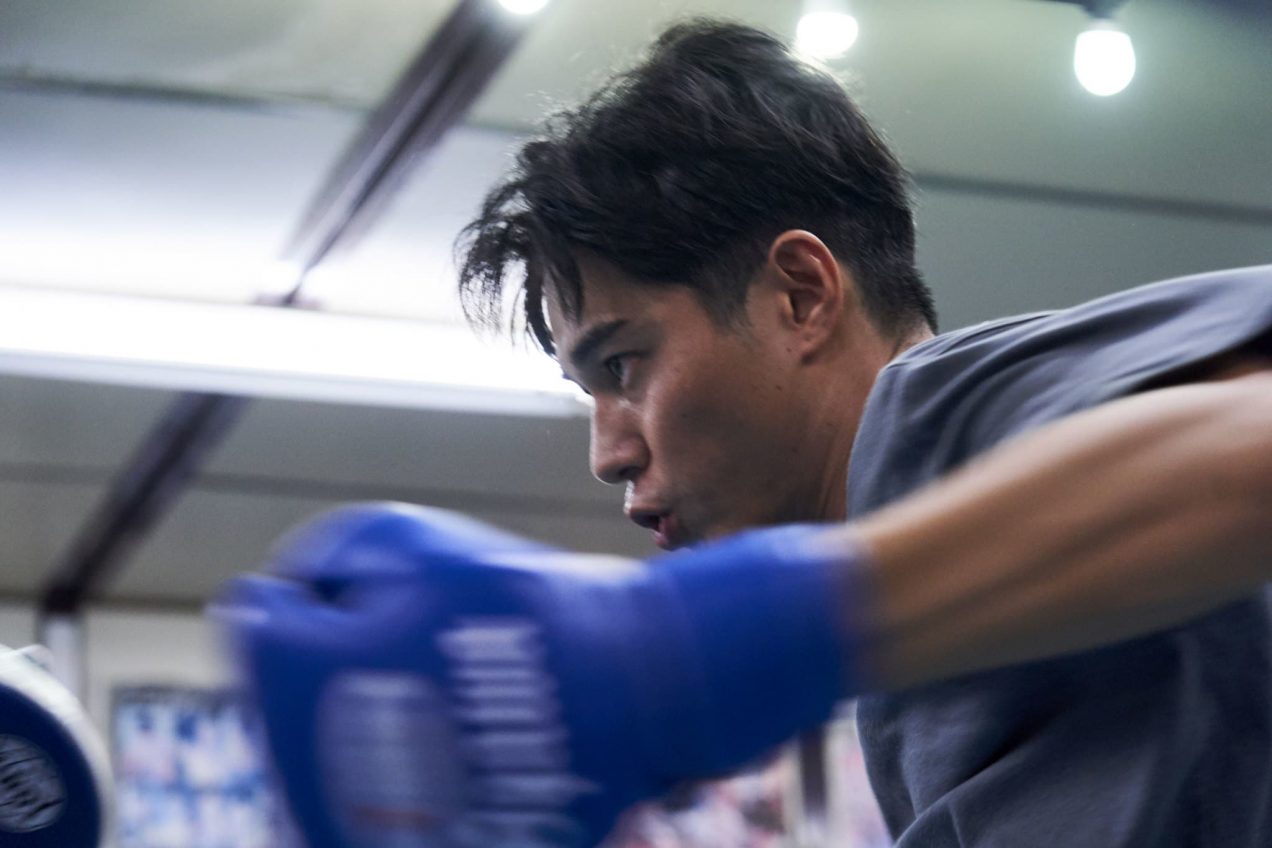 In Blue, director and scriptwriter Keisuke Yoshida constructs a simple yet impactful story about two professional boxers and one hopeful newcomer who devoutly work towards achieving their goals: winning a bout, a championship, and the heart of a crush. It’s an affectionate and inspiring film about persistence and love for the sport, but it also harbours a more critical reflection on the sacrifices needed to achieve success in the ring. The film boasts an array of charming characters whose relationships with each other are explored in captivating ways, and the performances from the cast are suitably strong.

The story follows ageing professional boxer Nobuto Urita (Ken’ichi Matsuyama), a fighter who can’t beat his opponents despite his dedication and hard work. His best friend Kazuki Ogawa (Masahiro Higashide), on the other hand, is hailed as the boxing gym’s main hope to win the national championship for the first time in 30 years. Arcade employee Tsuyoshi Narazaki (Tokio Emoto) also attends the gym, and through a curious turn of events, ends up pretending to be a boxer to impress his co-worker. As the three men train, they develop a friendship and encourage each other despite their differences in personality and boxing ability. The relationship between the boxers is at the heart of the film, as is a pure passion and enthusiasm for the sport.

The joy of boxing is well depicted through the amateur Narazaki, who finds a sense of achievement through his strict training regimen. The film’s director Yoshida himself has a background in boxing and his take on the boxing film genre feels personal. All the boxers at the gym have distinct personalities and their stories are treated with care and interest.

Blue also takes an insider’s perspective to delve into the negative points of boxing. For instance, the promising Ogawa finds himself pushed into a corner by his declining health and his justly worried girlfriend Chika Amano (Fumino Kimura). Chika is a great addition to the cast of characters and through her, the film looks at life outside the boxing gym. As the girlfriend of Ogawa, and old childhood friend of Urita, Chika also brings out an interesting dynamic between the two friends.

Furthermore, the film places Urita and Ogawa at odds with each other in terms of their boxing philosophy. Urita focuses his attention on honing the basic moves and believes that matches can be won by mastering the core skills. Ogawa takes more risks by performing unusual and daring punches, sometimes achieving moments of excellence. Due to his aptitude, Ogawa becomes idolised by some of the younger boxers, while Urita has a harder time gaining the trust and respect of the amateur boxers he helps to train.

The film’s take on teaching and inspiring others is engaging and it raises the curtain on the behind-the-scenes work at a boxing gym. Nevertheless, as Ogawa reflects, enthusiasm and talent are two entirely different things in the end, and all efforts may not be rewarded.

The pain and frustration of trying, yet not necessarily succeding, are explored in an interesting way in Blue and this makes the film universal beyond any sport or location. The film also asks whether the achievements in boxing are worth the sacrifices and it wonders whether not giving up and always pushing forward are good things. Through such questioning and the utterly likeable characters, Blue offers an accessible insight into the world of boxing, human relationships, and the way we strive for accomplishment.

Blue screened as part of Udine Far East Film Festival 2021, which ran from 24 June to 2 July in both physical and online formats.

Jenni Leppihuhta is a member of the #FEFF23 Campus 2021. The campus is run each year, allowing young journalists from all over the world to cover the festival. You can find out more about the campus here.

Jenni Leppihuhta
A recent graduate with a Film Studies bachelor’s degree based in Finland and the UK. Always aspiring to learn more about art, culture and languages of the world. I participated in the Far East Film Festival Campus program for film journalism.