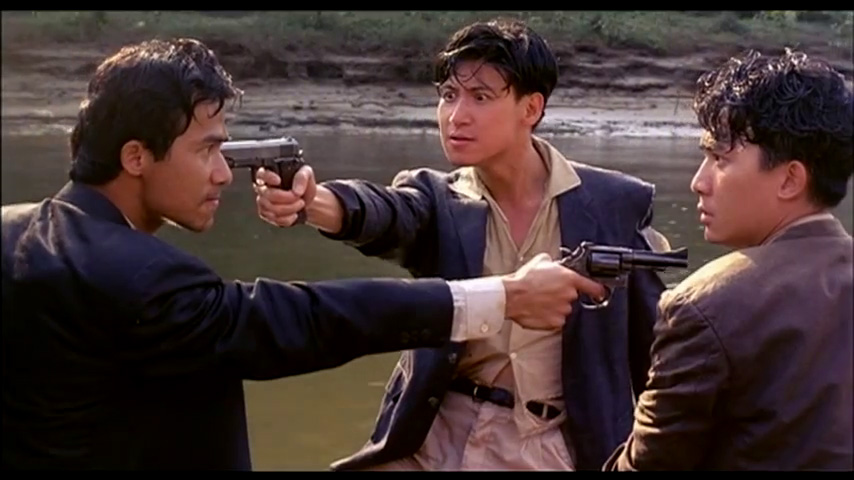 Director John Woo and Producer Tsui Hark had a fruitful collaborative partnership in the 1980’s. With A Better Tomorrow and The Killer, the two had been responsible for some of the greatest Hong Kong films of the decade, which gave rise to Heroic Bloodshed – the action sub-genre based on themes of loyalty, redemption and honour.

As producer, Tsui often had more say on these films and his influence would become increasingly pervasive for Woo. Woo disowned all but the final act of A Better Tomorrow II as he hadn’t been happy with the end result. Tsui rejected ideas Woo had for The Killer, (like the main character being a Jazz musician) which would see the light of day, free from Tsui’s approval, in 1992’s Hard Boiled.

After the successes of A Better Tomorrow in 1986 and A Better Tomorrow II a year later, they were keen to make a third entry in the series. Woo sketched out his plans for a prequel to the first film set during the Vietnam War, which were rejected by Tsui. This led to their final falling out and a power struggle. Tsui essentially had Woo blacklisted in the industry by publicly claiming he was difficult to work with. Tsui would take over writing and directing duties himself for A Better Tomorrow III, with star Chow Yun-Fat returning and the Vietnam War setting remaining, releasing the film in October 1989.

Around the same time, China had been experiencing political strife; student protests against government corruption in Beijing had resulted in the Tiananmen Square Massacre of June 1989, in which the communist government used force to suppress protestors, leading to widespread civilian casualties. Woo was appalled at these actions and wished to express this by using the ideas he had developed for the next A Better Tomorrow film. Woo retooled his script and brought it to the screen as Bullet in the Head. Set during the violent 1967 Hong Kong riots, caused by supporters of Mao Zedong who reacted against Britain’s rule of Hong Kong, this reflected the recent spate of violence experienced by the Chinese.

Ah Bee (Tony Leung Chi-wai), Fai (Jacky Cheung) and Little Wing (Waise Lee) are three close friends living in Hong Kong during this time. On the day of Ah Bee’s wedding, Fai is attacked and mugged by a rival street gang, causing Ah Bee to exact revenge. When he accidently kills the leader of the gang, the three friends go in hiding. Wing’s uncle, a gangster with ties to Vietnam, tells them that the ongoing war will bring opportunity through the smuggling of contraband goods. With suitcases full of Rolex’s, herbs and penicillin, Ah Bee flees Hong Kong, leaving his old life and his new bride (Fennie Yuen) behind to find fortune in Vietnam. Hooking up with a hitman, the mysterious Ah Lok (Simon Yam), the three soon run afoul of gangsters and the Vietcong, while the boundaries of their friendship is pushed to its limit.

The futility of war and the effect on those who experience it is expressed masterfully by Woo through the dehumanisation of the main characters and a persistent thread of moral ambivalence. It’s full of memorable imagery that stays with you long after the credits. As you would expect for a John Woo film, the action set pieces are extraordinary and look spectacular on a grand scale.

As the lead, Tony Leung shows early signs of his later stardom. Leung is a tremendously expressive actor, capable of nuanced performances. Even for such a relatively early appearance, his work here is no exception. The human cost seems to be magnified when reflected on Tony Leung’s face.

Cantopop singer Jacky Cheung is cast against type as the violently loyal Fai. Though he has a tendency to over act, particularly later on, he’s generally good throughout. Waise Lee isn’t bad either, despite his limited two-dimensional character. The son of a street sweeper, Little Wing loathes poverty and longs for wealth regardless of the cost. Greed is always at the forefront of his dialogue, giving foreshadowing on his later actions. Simon Yam exudes cool as the ruthless yet honourable Ah Lok aka Luke, named after the biblical disciple, whose journey of redemption is inspired by Woo’s Christian beliefs.

Bullet in the Head stands as an important work in Woo’s career. His most personal piece, the film remains an underrated action classic nearly a quarter century on, evoking favourable comparison with some of the more iconic entries from his famous filmography.

Unfortunately, for various reasons it was not a success with audiences in Hong Kong. Viewers had been turned off by the film’s bleak content and the Tiananmen Square allegory. Though an impressive cast in retrospect, none of the main actors were box office stars at the time. Also, its August 1990 release came ten months after A Better Tomorrow III and the similarities between the two films – of three Hong Kong nationals involved in black marketeering during the Vietnam War – are evident. Bullet in the Head had been a gruelling undertaking for John Woo and its failure to resonate with the public had a devastating effect on him. He would go in more of a light hearted, commercially palatable direction for his next film, Once a Thief. But that’s a story for another day…

The 2-disc Hong Kong Legends Platinum Edition DVD release of Bullet in the Head is complemented by a wealth of extras totalling over 5 hours, including the films low key but effective alternate ending. Like most Hong Kong Legends DVDs, the high point of these extras is Bey Logan’s informative audio commentary that contains a tonne of detail regarding the production. Logan also hosts a featurette in which he visits locations used in the film, giving additional context to its setting as well as his own analysis.

Three of the main actors (Yam, Lee and Cheung) are each interviewed, as is Woo. Woo’s interview was conducted before his 1993 move to the US and touches upon the origins of some of his prior hits in addition to Bullet in the Head. At 13 minutes it’s relatively brief but covers a lot of ground.

The three interviews with the co-stars are more contemporary, filmed around the time the DVD was produced. Yam offers his opinion of why the film wasn’t a success and reveals he was to have a much smaller role but Woo kept requesting him for more scenes. Lee speaks of Woo’s methods towards actors; how Woo would ignore and yell at him on set, as he felt Lee’s character should be unhappy and pessimistic – a departure from the student-mentor relationship they had while filming A Better Tomorrow. Cheung feels it was one of the best films he was ever in and is the favourite of his performances because of how infectious Woo’s motivation was.

Unexpectedly, interviews with co-writer Patrick Leung, editor David Wu and action-director Lau Chi-ho were also produced for the DVD and provide an interesting look into a John Woo production from behind the screen.

Bursting with relevant information and a wealth of trivia, this release stands as the definitive version of the film and comes highly recommended.