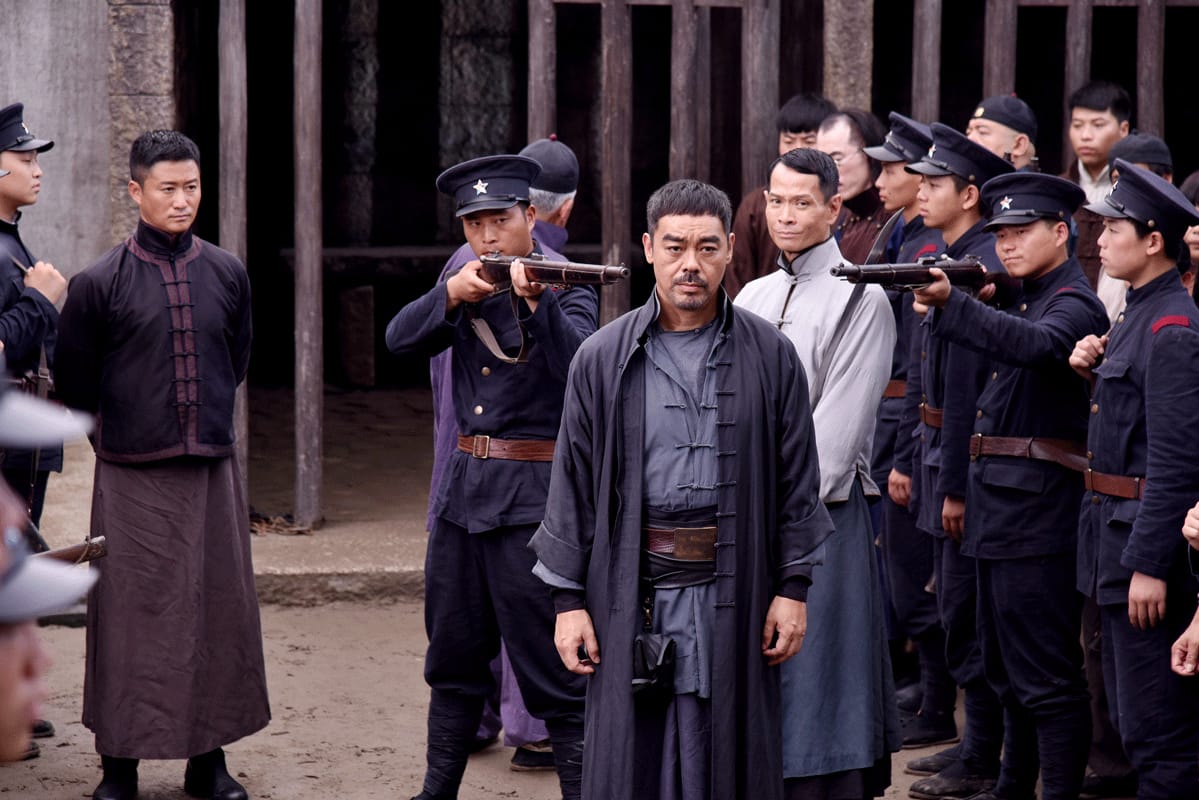 With a career charting back over 25 years since his debut A Moment Of Romance, Benny Chan once again proves a reliable director of action films as he returns to period wuxia films for the first time since Shaolin. Formally known as The Deadly Reclaim, Call Of Heroes features a star-studded cast, reuniting Chan with stars of previous films including Lau Ching-wan (The White Storm), Louis Koo (Connected), Wu Jing (Invisible Target), Yuan Quan (The White Storm), Liu Kai-chi (New Police Story) and Xing Yu (Shaolin), while providing Eddie Peng (Cold War 2, Rise of the Legend) with a solid leading role. Maggie Jiang (So Young) and Phillip Keung (Helios, Wild City) round out the cast on a big production, which also features action choreography (and a fleeting cameo) from Sammo Hung.

Lau Ching-wan stars as Yang Kenan, the sheriff of remote small town Pucheng guarding its people amid the chaos of China during the Warlord Era of the 1910s. Eddie Peng plays Ma Feng, the stranger who rolls into town following a teacher and children in her charge, saved from a terrible massacre enacted by Cao Shaolun (Louis Koo), the sociopathic son of a local warlord. When Cao turns up committing horrific murders, Sheriff Yang jails him to await trail and judgement, only to find Cao’s army on his doorstep demanding his release before dawn the next day of they will slaughter the entire town. Facing incursions from Cao’s men to free him, and internal politics of a local boss, Yang must decide between his own moral code and saving those he’s promised to protect. Only one thing’s for certain, he won’t be standing alone.

As a director, Benny Chan’s work has always felt more comfortable against the backdrop of modern Hong Kong in comparison to his contemporary filmmakers. Indeed, despite Chan’s long career, Call Of Heroes is only his third historical/wuxia film, with his other entries into the genre being the 1993 Tsui Hark-produced The Magic Crane and more recent Shaolin. The result is his best effort in the genre to date, mainly by paying far less reverence to it – even as it opens on the archetypal backdrop for a confrontation, an inn. Here we meet Ma Feng, sleeping off a food coma as the inn and its patrons are robbed. He humorously tells them off as he innocuously stumbles around, setting the tone for Peng’s character, before displaying his flawless martial arts skills in a manner that nods towards Yueh Hua as the drunken knight in King Hu’s classic Come Drink With Me, sharing a similar shambolic, bearded appearance.

The frontier town of Pucheng belies the films true inspiration, that of the American Western, with the plot taking more than a few cues from Howard Hawks’ Rio Bravo, and the film it was largely a response to, Fred Zinnemann’s High Noon. Chan is unashamed in reflecting these references: Peng spends his time chewing a piece of straw hay, not unlike Clint Eastwood’s cigar-chewing ‘man with no name’; while Wong Kin-wai’s score captures the distinctive sound of the spaghetti western, recalling Morricone and Ferrio.

It’s interesting to see Chan set Call To Heroes in the same period as Shaolin, which centred on a warlord that time played by Andy Lau. As if he can’t imagine creating a film without guns, he once again asks what use is martial arts if it’s can’t be faster than a bullet? This time it’s a question he answers with style, and overall the action choreographed from Sammo and his stunt team does not disappoint. Fights are imaginative, keeping more of the kinetic, physical energy of early 90s wire fu without the over reliance on CGI that mars many recent efforts.

The cast genuinely seem to engage with their roles. Peng is surprisingly likeable as the mischievous Ma, who rediscovers back his conscience from his past as an imperial guard alongside Zhang Yi (Wu Jing), Lau dependable as always playing the town’s moral compass. Koo has the most fun, manically laughing his way through his role as the utterly deranged Cao. Unsurprisingly, with such a big cast many of the characters are underdeveloped, but Chan largely escapes this by having his cast to play to type. Roles for Liu Kai-Chi and Phillip Keung, for instance, are not so unfamiliar that they become a stretch. That doesn’t mean things always play out in clichéd manner: when confronted Yang’s wife (Yuan Quan) proves every inch the martial artist her husband is – by no means weak and defenceless – which seems a very Hong Kong sensibility.

At the heart of the film, the question of acting morally versus backing down to authorities (particularly those forced on the populace) and (in this case literally) letting them get away with murder to survive – which, ahem, you can read as much or as little as you like. In reality Call Of Heroes is hardly a film with great meaning, but it is a fantastic slice of entertainment that doesn’t feel overly long for its near two hour running time, and also doesn’t overplay melodrama and sentimentality. Easily one of the better recent films of this type.

Call Of Heroes is released by Cine Asia on DVD and Blu-ray from 2 January 2017.