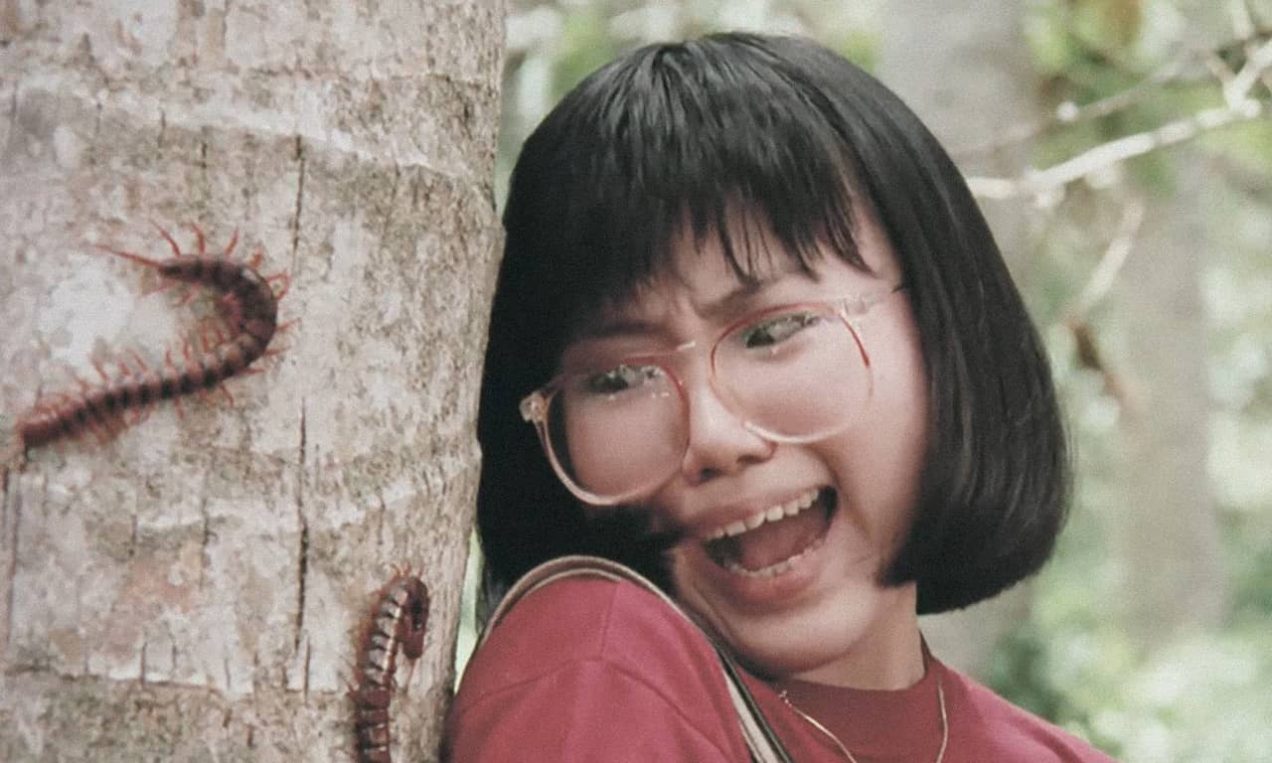 Few Category III rated Hong Kong shockers have achieved the notoriety of Centipede Horror, a film which has been lurking around in low-quality bootleg form for years, offering exploitation fans who manage to track it down scenes of real-life insect vomiting. While many such forbidden fruits inevitably fail to live up to their outrageous reputations, Keith Li’s black magic howler is most assuredly the real deal, and though it might prove a little whacky for viewers hoping for straightforward nastiness, it certainly does deliver as promised.

The film starts in Hong Kong, with Pak Kai-Lum (Michael Mui, who went on to feature in the Lucky Stars franchise) reluctantly agreeing to let his younger sister Kay go on holiday to what’s referred to as Southeast Asia, despite their mother’s insistence that they never set foot in the region. Unfortunately, Kay is attacked while on a tour in the countryside and is hospitalised, and although Pak rushes to her side she dies of a gruesome affliction that sees live centipedes bursting from her body. Pak stays on to investigate, helped by his old flame Cheuk Yee (Margaret Lee, Journey of the Doomed), exposing dark family secrets and getting caught up in a black magic feud that threatens to have them both suffering the same fate as Kay.

A film like Centipede Horror can really only be judged on whether or not it gives audiences what they want, in this case scenes of live centipedes getting to up the nasty mischief promised by the poster art. Thankfully, Keith Li, who went on to helm the Shaw Brothers production The Supreme Swordsman and Mr Vampire knock-off Vampire Kids (AKA Vampire Resurrection), doesn’t disappoint, and the film features a good amount of creepy crawly centipede action, including the much-vaunted centipede vomiting – the female cast members surely deserve some kind of acting or bravery awards for gamely allowing the filmmakers to cover them in centipedes, and for agreeing to put them in their mouths for the centipede puking closeups.

Perhaps surprisingly, Centipede Horror had a female scriptwriter in Amy Chan, who also has a small role in the film and who also wrote the even more obscure 1983 black magic shrieker Red Spell Spells Red. She certainly seems to know her stuff when it comes to Gong Tau and evil sorcery, as the film is packed full of entertaining details, and as well as the centipede curse there’s an exorcism, child ghosts, animated chicken skeletons and more, most of which comes accompanied by helpful explanatory voiceovers. This is very much at the heart of the film, and the plot plays out in a similar fashion to many other Hong Kong black magic horrors of the time, in particular Shaw Brothers shockers like Hex, Corpse Mania, Seeding of a Ghost and others, with the central investigation narrative seeing things get more and more out of control, building towards Grand Guignol finale – in this case, an intense, twenty-minute black magic duel that brings the film to a riotous conclusion.

Li doesn’t skimp on more traditional exploitation elements, and the film has plenty of gore and nudity to keep Category III fans happy. To be fair, the film isn’t quite as over the top or unpleasant as others of the period, and aside from the centipede scenes, which are scattered quite sporadically throughout, never launches into the full-on madness of The Boxer’s Omen, The Seventh Curse or others which deal with similar subjects. This isn’t necessarily a bad thing, and while some stretches may test the patience of viewers looking for far-out thrills, Li’s direction is creditably solid and coherent, and the film looks professional despite what was clearly a very low budget.

Of course, this isn’t to suggest that Centipede Horror is a sensible or normal film, and, given the live centipede scenes, is not one for the average viewer. Category III fans and those looking to explore the outer reaches of exploitation cinema will find much to be impressed by though, and the film is one of the better black magic horrors of the period.